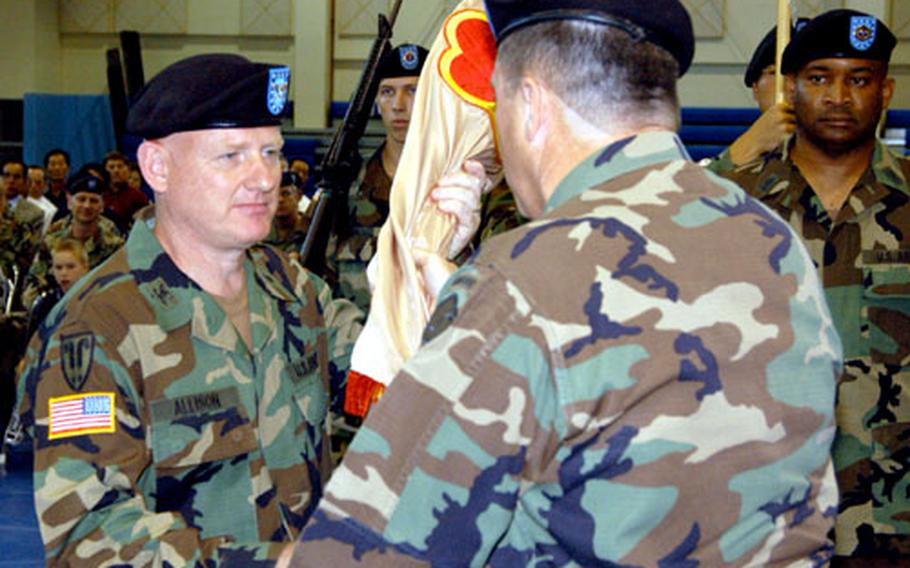 Ensuring that workers&#8217; skills and equipment at the U.S. Army&#8217;s repair depot in South Korea keep pace with the newest gear to enter the military&#8217;s inventory is among key goals of the depot&#8217;s new commander, he said Wednesday.

MSC-K carries out major repairs on military hardware &#8212; tanks, trucks, firearms, radios &#8212; and a broad range of other items. It also warehouses supplies and equipment, including combat vehicles and ammunition, for wartime use.

Allison replaced Col. Charles J. Toomey Jr., who has moved to the Defense Logistics Agency. Toomey, who commanded MSC-K since July 2003, will be DLA&#8217;s deputy executive director for Distribution and Disposal Operations.

Allison previously was a student at the Industrial College of the Armed Forces at Fort Lesley J. McNair in Washington, D.C.

It&#8217;s too soon to specify what types of gear that eventually might be, he said, but it could include high-tech communications equipment to unmanned surveillance drones.

For example, if MSC-K eventually was charged with maintaining the drones, known as unmanned aerial vehicles, or UAVs, depot staff would need to know how to do so.

Allison also will eye whether future entry-level hires have the most up-to-date training to match changes in the unit&#8217;s equipment and methods, he said.

&#8220;We have to be looking at the future ... work force. We have to ensure that we have the capacity for not growth in size but growth in human capital,&#8221; Allison said, &#8220;through some kind of apprenticeship programs with the local community, hiring people that have the technical skills we need.&#8221;

He said continuing to build good relations with nearby communities and promoting on-the-job safety also are among his goals.

A native of Scotland and naturalized U.S. citizen, Allison enlisted in the U.S. Navy and served from January 1976 to January 1979. He enlisted in the Army Reserve in 1980 and was commissioned a lieutenant in 1981. After graduating in 1982 from Bemidji State University in Minnesota, where he was a distinguished military graduate, he entered active duty in the Army&#8217;s Ordnance branch.

He holds a master&#8217;s degree in administration from Central Michigan University and a master&#8217;s in national resources strategy from the Industrial College of the Armed Forces. He also is an Army Command and General Staff College graduate.