New combat outpost set up in northern area of Iraq 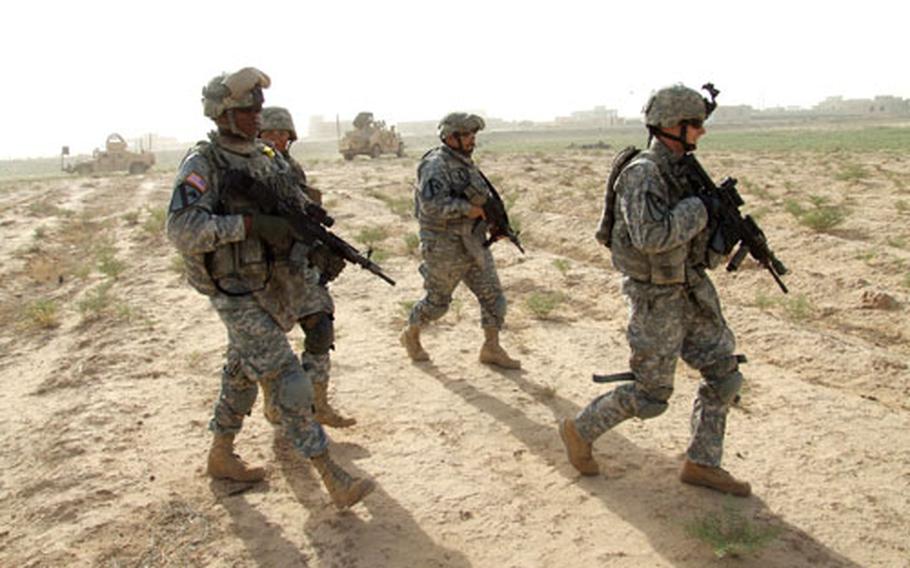 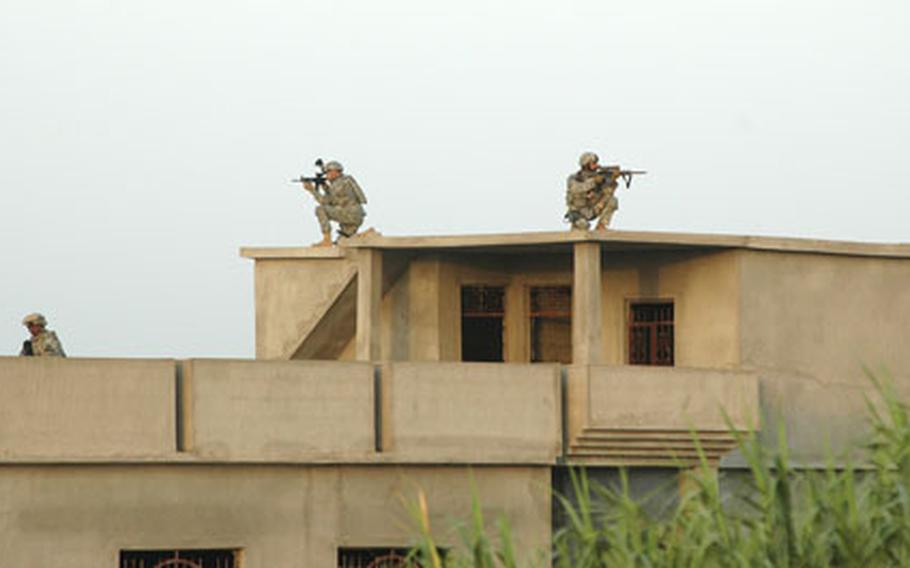 Soldiers of the 5th Battalion, 82nd Field Artillery Regiment establish initial security of a house being augmented as a combat outpost which will be manned by both U.S. and Iraqi forces. At left is Sgt. Brion Baker, 25, of Magdalena, N.M., and at right, Sgt. Jarvis Brel, 28, a native of the South Pacific island of Palau. (Les Neuhaus / S&S) Army 1st Lt. Christopher Ricciardi, 27, of Edwardsville, Ill., and an interpreter consult with an Iraqi family as they tell the women and children that a new combat outpost has been set up by the regiment directly next to their house. (Les Neuhaus / S&S)

Nobody needs to tell members of the 1st Cavalry Division&#8217;s 5th Battalion, 82nd Field Artillery Regiment, 4th Brigade this. On Friday, well before dawn, the 5th Battalion soldiers had been driving all night in their mission to reach an objective: a no-frills, half-completed concrete home they commandeered in the small village of Hechel, just east of the Tigris River in Iraq&#8217;s remote north.

At 3 a.m., the first members of the regiment left Forward Operating Base Q-West in a convoy of five heavily armed Humvees with a mission to get to the house, and not leave until a combat outpost was set up.

&#8220;Our battalion has determined that this is the most active insurgent area within our operating environment,&#8221; 1st Lt. Christopher Ricciardi, 27, and a native of Edwardsville, Ill., said early Friday morning, just after his men in 2nd Platoon had arrived and secured the area. &#8220;We hope that what we&#8217;re going to do here will eliminate the threat of insurgent activity.&#8221;

But accomplishing the goal of erecting a fully capable &#8220;outpost&#8221; is not easy. First, as the word implies, the location is remote. Next, it&#8217;s in one of the hottest places on Earth.

The mission was expected to take up to 24 hours, with nearly 100 soldiers working all day in 120-degree heat and on into the next day. By late afternoon Friday, one man was down from heat exhaustion, but he bounced back, thanks to the on-scene medical team.

Bringing in the required supplies needed to finish out what had been a skeletal facility was a Herculean task. The troops encountered three roadside bombs on Friday and safely detonated each as they attempted to bring everything in.

&#8220;Our teams first found two staggered along the roadside about seven to eight kilometers north of our objective,&#8221; said Maj. George Johnson, 39, and from Desoto, Mo. &#8220;The other was found just a little farther down the road, closer to this outpost. They were set intentionally for our patrols.&#8221;

Two of his men were killed last month when a makeshift bomb was set off near one of their convoys. The new outpost is dedicated to one of those soldiers, having been dubbed &#8220;Nepsa,&#8221; in honor of Cpl. Keith V. Nepsa.

On Friday, the teams brought in 15-foot-high concrete barriers and shorter dirt-filled obstacles to secure the perimeter. Generators, refrigerators, concertina wire, electricity &#8212; everything had to be brought in &#8212; even a kitchen sink and cooking capabilities.

Troops hired a bevy of local teenage boys to do some of the grunt work, paying them $15 a day for clearing rocks and the like. It&#8217;s a king&#8217;s ransom considering many Iraqis live on less than $1 a day, according to varying World Bank, International Monetary Fund and U.N. statistics.

The goal is to turn the outpost over to the Iraqis within a few months. But for now it will be run jointly by U.S. and Iraqi forces, including the local police, who were on scene Friday to help quell the worries of the surrounding Iraqi civilians.

Saadya Ahmad, who lives adjacent to the newly fortified compound, had mixed feelings about her new American neighbors.

&#8220;We will have protection &#8212; I hope that we will be safe,&#8221; she said to the military officials greeting her and informing her family of seven about the situation through an interpreter.

But afterward, she told a reporter she was worried that their house might become a &#8220;target&#8221; should anti-Iraqi and U.S. forces begin a campaign of violence against the outpost.