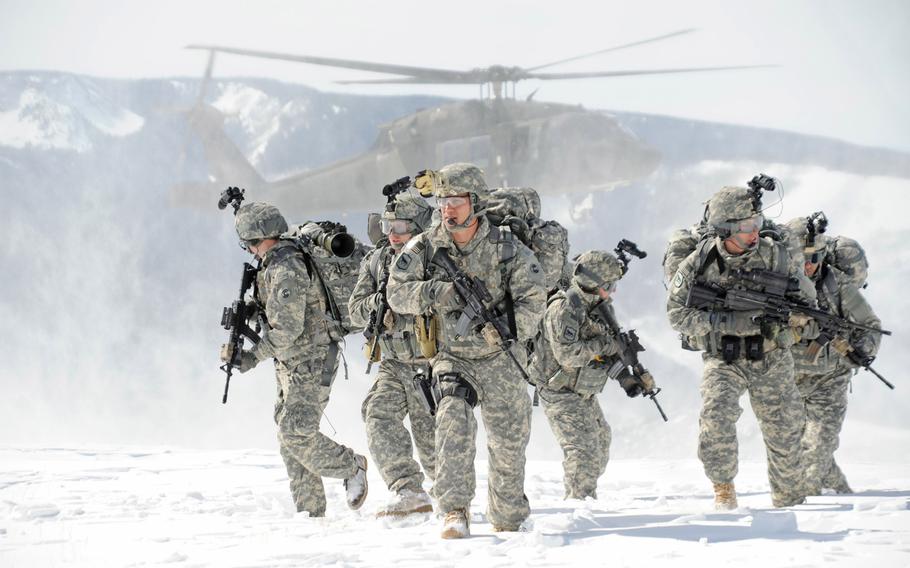 Soldiers wearing Extended Cold Weather Clothing System gear move through a snowy terrain after dismounting from a helicopter in March 2010. Army scientists are working with nanotechnology to produce cold-weather uniforms that will heat up when switched on and wick moisture away more efficiently. (Courtesy of the U.S. Army)

A revolutionary new cloth that uses nanotechnology to generate heat could end the days when soldiers deployed to Arctic environs are forced to walk around looking like 2-ton Stay Puft marshmallow men.

Created at the U.S. Army Natick Soldier Research, Development and Engineering Center in Natick, Mass., the material uses a coating of silver nanowires to reflect heat back to the wearer. The nanowires can generate temperatures up to 230 degrees Fahrenheit when an electric current is induced through them.

“Obviously the soldiers would not need that kind of heat, but that is just to show you the potential of how much we can heat up the fabric with just 3 volts, which is basically like a watch battery,” said Paola D’Angelo, a researcher at the center.

The Army hopes the new material will reduce both the weight and number of layers soldiers need to protect themselves from winter conditions. The Army’s current Extended Cold Weather Clothing System has seven levels with 12 pieces of clothing — not including numerous accessories such as gloves, scarves and the aptly named “bunny boots.”

Made largely of Gore-Tex, polypropylene and different types of fleece, the current cold-weather system is meant to protect users at temperatures ranging from minus 60 to 40 degrees Fahrenheit.

Although it is a vast improvement over previous versions of cold-weather gear used in the 1990s and earlier, the third-generation ECWCS now in use is still bulky, D’Angelo said.

“Seven layers is quite a lot for (soldiers) to wear. It increases their weight,” she said. “So we’re trying to minimize the weight load for them by coming up with a coating that is gonna go in the base layer.”

The advances in cold-weather gear come as the Army shifts attention back to frigid environments in northern Europe even as it continues missions in the swelter of Afghanistan and Iraq.

In Europe, the Army has spent millions painting its tanks and other combat vehicles forest green as part of a broader tactical reorientation to its old Cold War stomping grounds. The Marine Corps has also picked up the pace of its operations, establishing a year-round mission in Norway’s high north.

In September, Russia will launch its Zapad maneuvers, a massive war game where NATO experts expect as many as 100,000 troops to participate. During this time, the Army will conduct Rapid Trident, an exercise in western Ukraine involving 10 U.S. allied countries. While this happens, aggressive rhetoric continues to flow out of North Korea over nuclear weapons.

Before scientists use the as-of-yet unnamed material in the base layer of new cold weather uniforms, they hope to create gloves from the material and evaluate the outcome.

D’Angelo and fellow researcher Elizabeth Hirst are experimenting with another type of coating for the cloth, a hydrogel that will wick away a soldier’s perspiration and store it. The gels in powder form can absorb 40 times their dry weight in water.

One major challenge is developing a way to power the new base layer. Because field batteries tend to be heavy, Army researchers are trying to develop thin, lightweight batteries that are stretchable and flexible.

To limit the additional water weight that a soldier would produce while wearing what amounts to a high-tech sponge, Hirst envisions a system by which the base layer would be changed out when its hydrogel coating becomes too heavy with absorbed water.

Pfc. John Kreycik, a combat engineer with the 173rd Airborne Brigade, said that the new material and gloves seem like a good idea, but he wondered about the specifics.

“It would give me the ability to perform my job more safely and quickly in harsh weather conditions,” he said.

“Working with countermobility obstacles like concertina wire, gloves tend to get destroyed. So they would need to be durable. I’m concerned about dependability and safety. What do they weigh? How long does a charge last? Is there a possibility of injury if it malfunctions?”