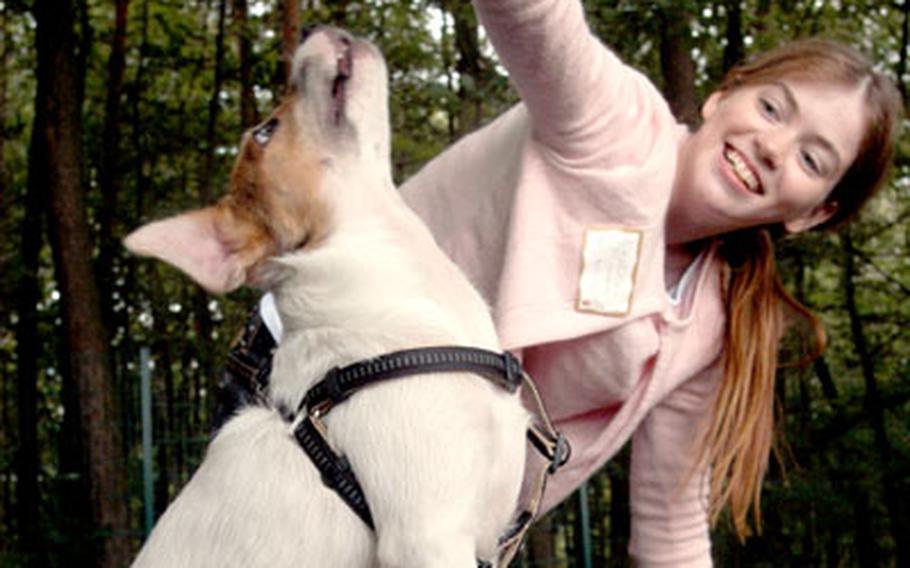 Dogs such as Harry, a Jack Russell terrier, could be treated next year at a new veterinary clinic being planned in Stuttgart, Germany. Destinie Carriger, 14, daughter of Charles and Deborah Carriger, was dog-sitting Harry on Friday for one of her dad’s co-workers. (Charlie Coon / S&S)

STUTTGART, Germany &#8212; A new veterinary clinic is being planned for Stuttgart to replace the one slated to be turned into a dental office.

Construction on the clinic is scheduled to start in early 2006 after funding, a new site, and building plans are finalized, according to Lt. Col. David Giles, facilities director for the European Regional Medical Command, or ERMC.

Rumors had circulated that veterinary services in Stuttgart, which treats about 1,200 animal patients, many of them annually, would disappear after a dental detachment took over the current veterinary clinic as part of Stuttgart&#8217;s master plan for facilities.

But Giles said that the veterinary clinic would remain in place until a new facility is built.

&#8220;Nothing will happen with the existing dental clinic until the [new] veterinary clinic is up and functional,&#8221; Giles said.

The Stuttgart Veterinary Treatment Facility, which falls under the Kaiserslautern-based 64th Medical Detachment, has 10 soldiers on its staff, said Dr. (Capt.) Clinton George.

Half the soldiers are currently deployed to Iraq, and the unit has hired civilian veterinarians to backfill.

Other duties of the veterinary staff include inspecting Meals, Ready to Eat; food that is sold by the Stuttgart commissaries and other vendors; and caring for military working dogs.

Service for privately owned pets is more privilege than priority, especially since soldiers from veterinary units started deploying to Iraq and Afghanistan, according to Maj. Chris Lanier, operations officer for the 100th Medical Detachment, which oversees veterinary services in Europe.

&#8220;The units overseas were pretty stationary in peacetime and could do a little more,&#8221; Lanier said. &#8220;Now with deployments by some of the units, services are being affected as a result.

Since Stuttgart is considered an enduring military community, that is, one that would not be dissolved as part of upcoming base closings in Europe, the 6th Area Support Group had no intention of losing its veterinary clinic, according to 6th ASG spokeswoman Jennifer Sanders.

Sanders added that the shuffle of dental and veterinary facilities in Stuttgart would take 12 to 16 months to finish.

Three or four locations currently are being considered for the veterinary clinic, said Sanders.

The relocation of the veterinary clinic is part of a broader plan to realign many of the facilities in Stuttgart, which is home to four main installations &#8212; Patch Barracks, headquarters of the U.S. European Command and other support units; Kelley Barracks, Robinson Barracks and Panzer Casern.

The 6th ASG recently announced it would build a new shopping center and food court at Panzer.