New clinic at Landstuhl speeds up access for servicemembers, expands care to civilians 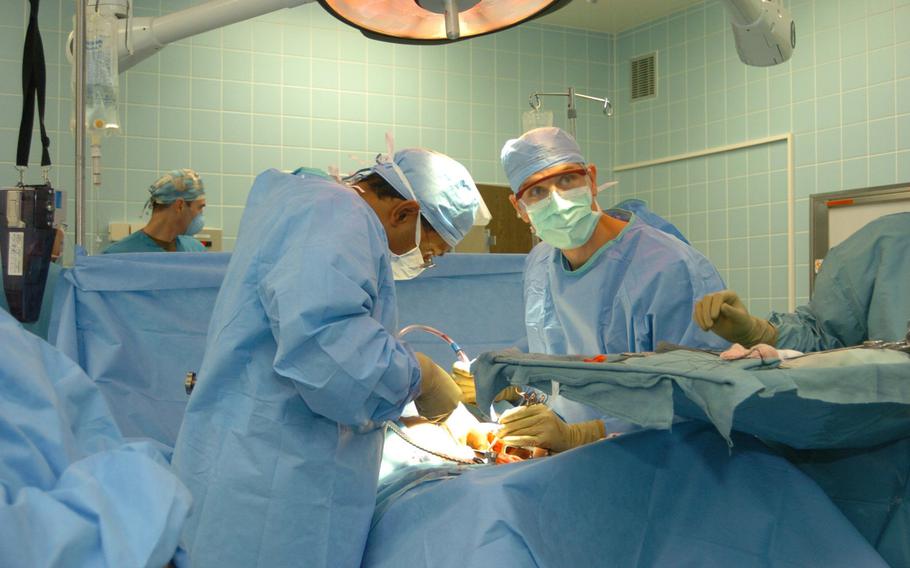 Doctors perform a surgery at Landstuhl Regional Medical Center. Surgery is one of the specialty clinics at LRMC that has received patients referred from the hospital's new Enhanced Access Clinic, which is designed to improve access for military members, their families and civilians. (Courtesy U.S. Army)

LANDSTUHL, Germany — A new clinic at Landstuhl Regional Medical Center is making it easier for active duty servicemembers and their families to get medical appointments, while also significantly expanding the pool of patients eligible for care at the hospital, officials say.

LRMC, the U.S. military’s largest hospital overseas, stood up the Enhanced Access Clinic in May after a two-month trial period. It is open to those insured through TRICARE, which includes military personnel, retirees and their families, and to non-TRICARE beneficiaries. The latter include Defense Department civilians and their families — patients who in the past typically sought medical care in the German health system since they could be seen only on a very limited, space-available basis at LRMC.

“Previously, their only option was to be seen in the emergency room or to see primary care services in the German network,” Mark Hatchell, LRMC chief of access and appointing, said of non-TRICARE beneficiaries.

Manned by three medical doctors and a supporting staff, the Enhanced Access Clinic offers an array of medical services in family health, pediatrics and internal medicine.

Patients can be seen at the clinic for acute or chronic illnesses, as well as routine exams, counseling, and disease prevention, among other services. They may also get referrals for more specialized treatment at the hospital.

A LRMC study identified a gap in care, Hatchell said, where “we saw that there was about three providers out at any given time across our primary care clinics.”

Filling those gaps “simply evolved into an enhanced access clinic,” he said.

The clinic’s providers can fill in when the hospital’s primary care clinics are short-staffed because of a deployment, turnover, illness, training or other issues. This opens up more appointments for servicemembers and their families, Hatchell said.

“Enhanced access is a backup to provide additional access to those patients who couldn’t otherwise get in to see their primary care provider” on a given duty day, he said.

Patients on average can get an appointment at the new clinic within seven hours for an acute medical need; routine or follow-up appointments can be made within seven days or fewer, on average. Since the clinic was stood up, the average booking time for acute appointments in LRMC’s primary care clinics has also gone down, from an average of 17 hours in the summer of 2015 to about 10 hours now.

The added clinic has also opened LRMC’s doors to pay patients whose only access to the hospital in the past was the emergency department and a few other services on a space-available basis. They include Defense Department civilians — including teachers, nonappropriated fund employees, U.S. contractors, authorized foreign military members and civilians, and command-sponsored civilian family members.

Those patients have the same access to care at the Enhanced Access Clinic as TRICARE beneficiaries, though they may have to wait longer for appointments if demand from military or military dependents is high, Hatchell said.

“We have not experienced that problem since the inception in March,” he said.

Since the clinic opened, the hospital has seen about 800 non-TRICARE beneficiaries, Hatchell said, on a continuing basis.

“Not only do we maximize patient care within the facility, we can get them back to work sooner, so they can take care of patients as well,” he said.

For the hospital, the influx of civilian pay patients offsets the cost of paying for additional staff and contributes to readiness, particularly for the hospital’s 52 medical specialty clinics, officials said. These patients can seek a referral to specialty care at the hospital as long as that facility is open to non-TRICARE beneficiaries.

As of Jan. 25, civilians could be seen in the gastroenterology and sleep medicine clinics, for example, but not in neurology or dermatology. Monthly availability can be checked online at: http://rhce.amedd.army.mil/landstuhl/services.cfm?MTFinfo_id=895

The specialty clinics receiving the most referrals from enhanced access have so far been audiology, the brace shop (orthotics and prosthetics), sleep consultation, ear, nose and throat, and surgery, officials said.

To seek care at the Enhanced Access Clinic, patients must first be registered in LRMC’s system. TRICARE Prime and TRICARE Plus beneficiaries must be enrolled with a primary care manager at LRMC. Registration can be completed at the hospital’s patient administration division with an insurance card. Once patients are registered, appointments can be made through LRMC’s central appointment line.

The new clinic is located in the space formerly occupied by the Women’s Care Clinic, which provided “well-women exams” to civilians without referrals. That service has been picked up by the hospital’s OB-GYN clinic, officials said.