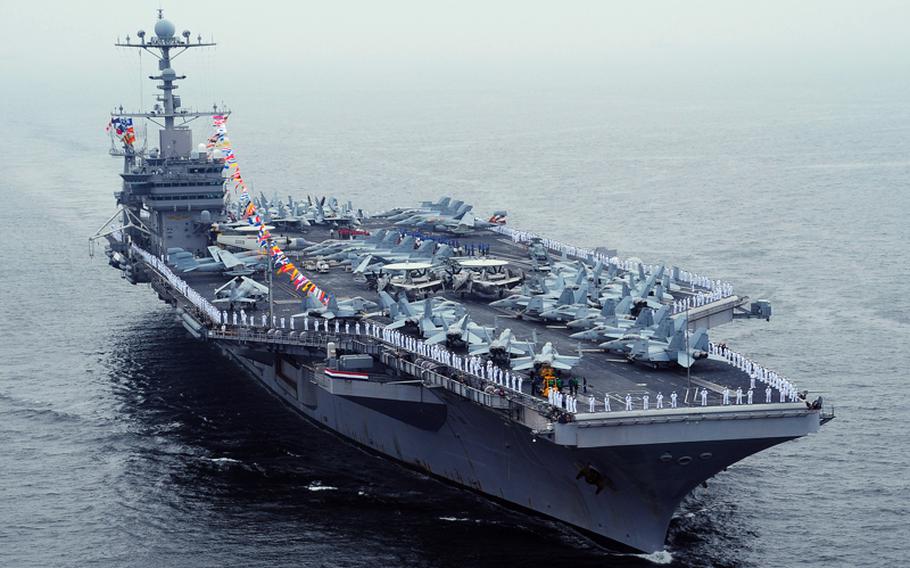 Sailors man the rails aboard the aircraft carrier USS George Washington as the ship pulls into port at Yokosuka, Japan, to celebrate the 4th of July. (Adam K. Thomas/Courtesy of the U.S. Navy)

YOKOSUKA NAVAL BASE, Japan &mdash; The official photos from a major Asian security forum in Hanoi this week will likely show Secretary of State Hillary Rodham Clinton and Chinese Foreign Minister Yang Jiechi dutifully smiling and shaking hands. But behind the scenes of the meeting, an ominous new Chinese weapons system that the Pentagon worries could alter the balance of power in the Pacific is further complicating the tense Sino-American military dialogue.

The advanced weapon, a medium-range anti-ship ballistic missile known as the Dong Feng 21D, is &ldquo;nearing operational capability,&rdquo; according to a report last year by the U.S. Office of Naval Intelligence. And if its targeting system proves accurate, the Dong Feng would rank as the world&rsquo;s first mobile, land-based missile capable of hitting a moving aircraft carrier from nearly 2,000 miles away, depending on its payload and other factors.

Privately, U.S. military officials concede they are alarmed. One Navy official familiar with Pacific operations, who declined to be identified because he was not authorized to speak publicly, said the Navy has only a theoretical countermeasure against the Dong Feng 21D because its trajectory and other capabilities are still largely unknown.

But even in public, senior officials have begun alluding to the problem.

Experts say the Dong Feng&rsquo;s basic design isn&rsquo;t much different from the Cold War-era Pershing II developed by the United States. But it&rsquo;s the land-based platform, the payload and the capability of a ballistic missile to redirect in mid-flight that especially concerns U.S. strategists.

&ldquo;[Individually], the technical abilities are not unprecedented, but it&rsquo;s a revolutionary combination of capabilities,&rdquo; said Paul Giarra, a former Navy commander and Defense Department senior Japan country director who now works as a strategic consultant.

The missile would be formidable during a battle, but its consequences go beyond any hypothetical, cataclysmic wars. The Chinese could use the missile as leverage to try to weaken U.S. security pledges to Taiwan and other Asian allies, establishing vast &ldquo;no-go&rdquo; zones in the Western Pacific, analysts say.

Relations between China and Taiwan have warmed since 2008, making confrontation between the U.S. and China over Taiwan unlikely in the short-term.

But that could change, experts predict, if China believes its softer approach isn&rsquo;t making progress toward unifying with Taiwan, which it considers a wayward province.

During past security crises in the South China Sea, Beijing has launched missiles and staged amphibious assault exercises near Taiwan to try to intimidate the island nation. It did so most notably in 1996, when China tried to influence the Taiwanese presidential election when it appeared that a candidate favoring Taiwan independence would win.

An active Dong Feng 21D missile arsenal would make that strategy more dangerous, because it would give China the option of firing warning shots if the U.S. sails too close for China&rsquo;s comfort, according to Toshi Yoshihara, an associate professor of strategy and policy at the U.S. Naval War College who recently completed a report on China&rsquo;s missile strategy.

&ldquo;A small dose of well-placed missiles, they seem to believe, might persuade the enemy to back down or to cease and desist,&rdquo; Yoshihara said.

Such an escalation, however, could quickly lead to miscalculations.

If fired upon, the U.S. might &ldquo;perceive what is intended as a warning shot or demonstration of resolve as a prelude to an all-out attack,&rdquo; Yoshihara said.

In a conflict, the U.S. Aegis destroyers and cruisers that accompany aircraft carriers could be used to foil anti-ship missiles with SM-3 interceptor rockets, experts say.

But Giarra noted that interceptor capacity on Aegis-equipped ships isn&rsquo;t enough to reliably defend against a volley of well-placed anti-ship ballistic missiles.

The U.S. could also employ other more traditional tactics by increasing its silent-running submarine activity to evade potential attacks, Giarra said. It could also move its surface ships beyond the missile&rsquo;s range.

&ldquo;One approach is to withdraw, of course,&rdquo; Giarra said. &ldquo;But that&rsquo;s the whole point the Chinese are trying to make.&rdquo;