New challenges on horizon as U.S. expands role in Tanzania 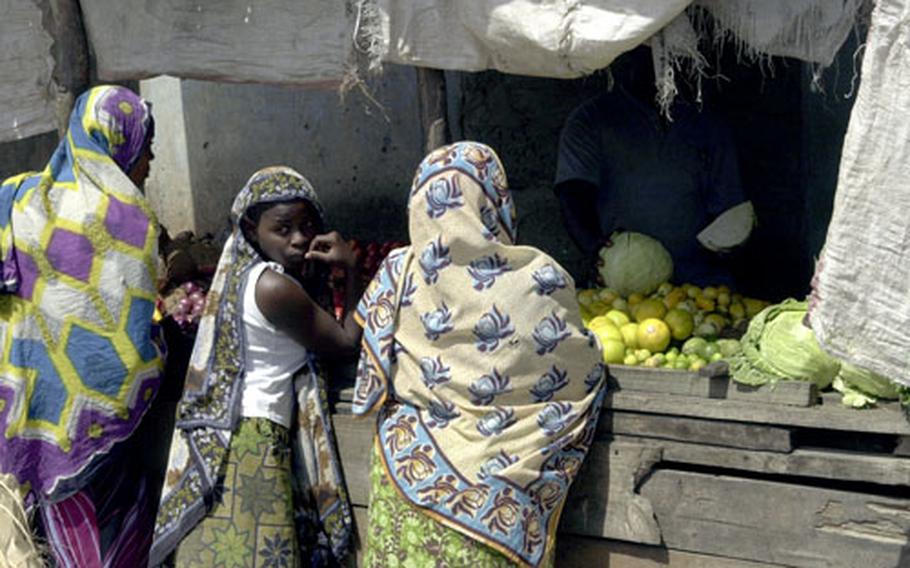 Young women bargain for vegetables at a market in one of Dar es Salaam, Tanzania’s poorest districts. (Joseph Giordono / S&S)

Young women bargain for vegetables at a market in one of Dar es Salaam, Tanzania’s poorest districts. (Joseph Giordono / S&S) Members of TANHOPE — an organization that performs development and charity work in Dar es Salaam — give donations to Fortunata Simon, a 30-year-old woman suffering from AIDS. Simon moved her five children to a slum in Dar when she was no longer able to work in her village. (Joseph Giordono / S&S) 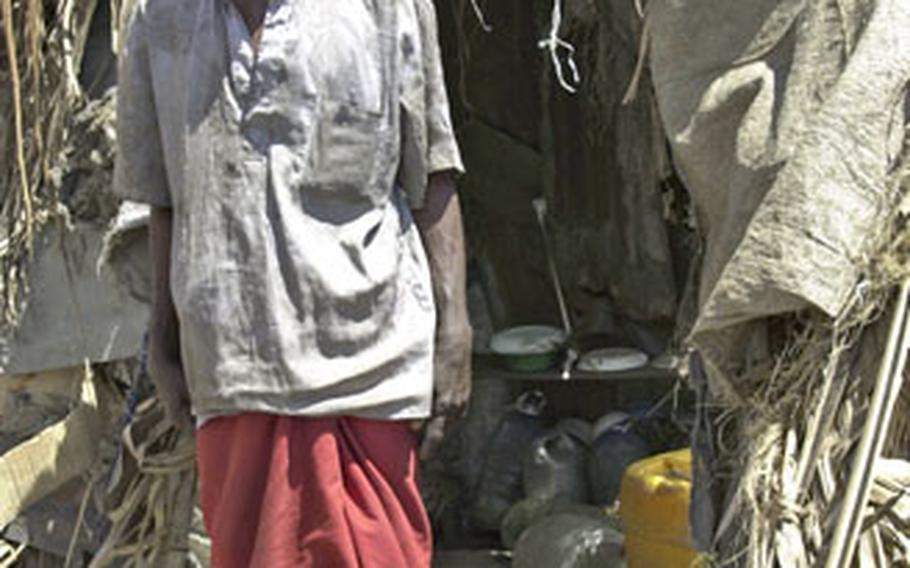 Salim Seif, a blind, 70-year-old veteran of the war with Idi Amin, lives in a ramshackle hut in the Tandale district of Dar es Salaam. Poverty is endemic in Tanzania. (Joseph Giordono / S&S) Schoolkids in the Tandale district of Dar es Salaam, Tanzania, are the subject of an ideoligical war between Islamic extremists and U.S. military efforts to counter the conditions that give rise to terrorism. (Joseph Giordono / S&S)

Editor&#8217;s Note: This is the second in a two-part series examining the expansion of U.S. military missions in Africa. Part I appeared on Sept. 17.

DAR ES SALAAM, Tanzania &#8212; One day last month, in an accident almost too common to be notable in this sprawling, chaotic African city, a young girl was run over and killed by a speeding driver.

It was the reaction to that incident in a Muslim-dominated, destitute district of Dar es Salaam that worried some people, however.

That night, hundreds of Muslim schoolchildren from the girl&#8217;s madrassa lay in the same busy road, refusing to leave or let cars pass. Drivers and police threatened the children, sprayed tear gas &#8212; even claiming at one point they were ready to fire into the crowd to disperse it &#8212; all to no avail.

Finally, when a senior police official met with the local religious leader the next day and acceded to promises of making the road safer, the children quietly packed up and left.

&#8220;What kind of kids are these? What are they being taught to believe that they are ready to die?&#8221; asked John Mnyika, the youth affairs director and parliamentary candidate from the opposition Chama cha Demokrasia na Maendeleo party, in a recent interview.

As the U.S. military expands its Horn of Africa mission into places like Tanzania, it will face a new set of challenges and a public made skeptical in recent years of America and its reach.

When he and other party members saw news coverage of a recent U.S. military mission in Tanzania, Mnyika said he first thought it was another State Department or NGO project.

&#8220;In the beginning, we thought it was just an extension of regular projects. Later on,&#8221; he said, &#8220;we came to think about it as an extension of American interests in Tanzania. The question became, what is the motive behind this?&#8221;

According to U.S. military leaders, the motive is to help African governments &#8212; particularly in the Horn of Africa and along its vast eastern seaboard &#8212; fight conditions like poverty and repression, which give rise to fundamentalism.

Tanzania is one of the poorest nations in the world, with a population of 37 million and an economy that largely relies on tourism, agriculture and trade with the Indian subcontinent and the Middle East. The AIDS rate has surged past 10 percent of the population; more than half the people live on the equivalent of less than 50 cents per day. Its annual military budget is around $20 million, roughly the cost of one U.S. Air Force F-16 fighter jet.

It is typical of a place where U.S. military leaders say an &#8220;ideological struggle&#8221; is going on between Islamic extremism and America. But for many Tanzanians, it almost feels as if they&#8217;re being caught in the middle.

&#8220;The language the fundamentalists use is rather harsh: &#8216;Jihad. Kill.&#8217; That type of language is foreign and too hard for most Tanzanians. It creates wariness,&#8221; said Moses Kulaba, who works with a local development agency called Agenda Participation 2000.

Richard Shaba, of the German-funded Konrad Adenauer Foundation in Dar es Salaam, cautioned against setting up only two opposing forces.

&#8220;Don&#8217;t encourage young people to look at the only two blocks. They might see similarities,&#8221; he said. &#8220;There is a central government here that is working, not like in Somalia. It&#8217;s a fact that fundamentalist forces are trying, exploiting elements of some people here. But it has not yet gained deep roots in Tanzania.&#8221;

American officials say it is precisely the right time to engage, then, before the roots grow deeper.

Many Tanzanian observers see echoes of the Cold War, when countries like Tanzania were in the middle of an international ideological war largely beyond their control.

&#8220;Many people have reached the state now where they think things will happen anyway. There isn&#8217;t conspicuous anti-American feeling, nor is there a feeling that America is a savior on its way,&#8221; said Kajubi Mukajanga, a policy analyst at the Hakielimu foundation in Dar es Salaam.

&#8220;The local media influence here is underappreciated. There are papers that are dangerously influential and those who read them unquestionably. In some papers on both sides, everything is set up as Muslim versus Christian, and issues are raised in a manner which reinforces bigotry, racial and religious disharmony,&#8221; Mukajanga said.

Kulaba and others agree that American priorities in the region should not be couched in military terms, but in expanding roads, fixing bridges in areas that impact the most people. These are ideas similiar to what the Horn of Africa task force undertakes.

&#8220;For the young man on the street, the American face that he sees and knows is now the American face in Baghdad, in Afghanistan or Guantanamo Bay. One of the best avenues for showing the American heart is being open,&#8221; Kulaba said. &#8220;I understand the security concerns, but what has happened &#8230; why are the Americans so closed? Transparency will show the people.