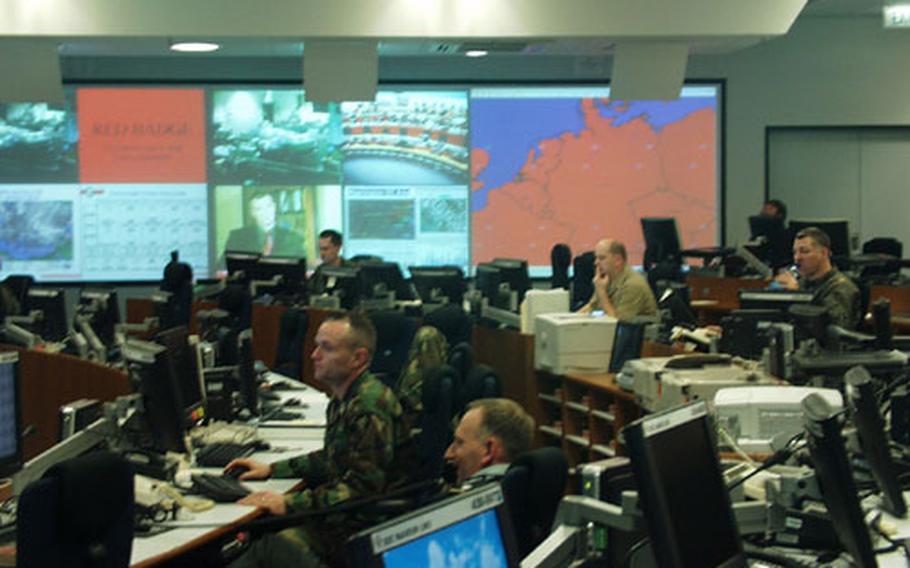 The U.S. European Command’s Plans and Operations Center opened about seven months ago on Patch Barracks in Stuttgart, Germany, and EUCOM officials tout it as a new way for the military to do business. (David Josar / S&S)

STUTTGART, Germany &#8212; Adjacent to the U.S. European Command Headquarters on Patch Barracks is the EUCOM Plans and Operations Center, a high-tech building that military officials say is the benchmark for the way the U.S. armed forces must operate now and in the future.

The building &#8212; known as the EPOC &#8212; has been operating for seven months, giving EUCOM leaders a new way to do business.

That, he explained, can make all the difference when the U.S. military is trying to influence a decision, whether that be taking out a dictator such as Saddam Hussein or attempting to persuade a country, such as Syria, to be more helpful in the U.S.- led war on terrorism.

The EPOC is the result of a directive by Secretary of Defense Donald Rumsfeld following the Sept. 11, 2001, attacks to create more &#8220;standing joint force headquarters,&#8221; which are capable of running a war as well as deploying expertise and guidance to other headquarters. By fiscal year 2005, each regional combatant command is to have one.

Traditionally, Tallent explained, militaries have maintained a staff structure with separate personnel, intelligence, operations, logistics and planning functions. That method worked well for hundreds of years, but that architecture created a &#8220;stovepipe&#8221; affect, where important information, because of the departmental organization, didn&#8217;t get to the right people quickly enough.

&#8220;Now we have an approach where the right people get that information much more efficiently,&#8221; he said.

The EPOC has about 190 billets, and more people are slowly being added as it gets up to full staff, said Air Force Lt. Col. Derek Kaufman. Now EUCOM staffers who need important information are in one large room, rather than in separate divisions in individual offices, Tallent said, who noted the restructuring actually mimics what many successful businesses have done in eliminating the need for middle managers.

&#8220;The EPOC postures EUCOM to be a 24/7 war-fighting headquarters with the ability to respond rapidly,&#8221; he said when the building was unveiled this past fall. &#8220;The goal is improved, responsive war-fighting capability.&#8221;

By appearances, the EPOC is from a Hollywood movie set, with flat-screen computer monitors and a dozen or so projection televisions showing images on the walls inside the main room, sort of an auditorium not unlike the ones NASA uses to monitor space missions.

Tallent said the EPOC uses commercially available equipment to operate, and includes features such as video conferencing and satellite imaging.

The EPOC would have been created eventually, but the war on terrorism sped its implementation, Tallent said. &#8220;We had to do things differently,&#8221; he said.

The EPOC has already proven its importance. When U.S. Marines were used off the coast of Liberia in August as a security force and to help protect the U.S. Embassy there, EUCOM staff used the EPOC to monitor and help run the operation.

In another recent case, Tallent said, EUCOM staff, because of the EPOC structure, identified a developing situation in Northern Africa and rapidly created a course of action.

In the previous traditional &#8220;stovepipe&#8221; method of organization, those staffers would not have been working so deliberately or so closely to spot such problems, he said.

The war on terrorism has forced the military to re-evaluate how it operates, Tallent said. For example, one of the EPOC&#8217;s divisions is the Joint Interagency Coordination Group, which includes civilians from federal agencies, such as the one that monitors money flow to and from banks.

The U.S. military, in fighting terror, has to interact with other militaries, the State Department, the CIA and federal law enforcement agencies, Tallent said.

With the Department of Defense, the individual branches of the armed forces work seamlessly together, but those ties remain less smooth with other organizations and other countries, he said. The EPOC staff, he said, will continue to operate to get increased cooperation.