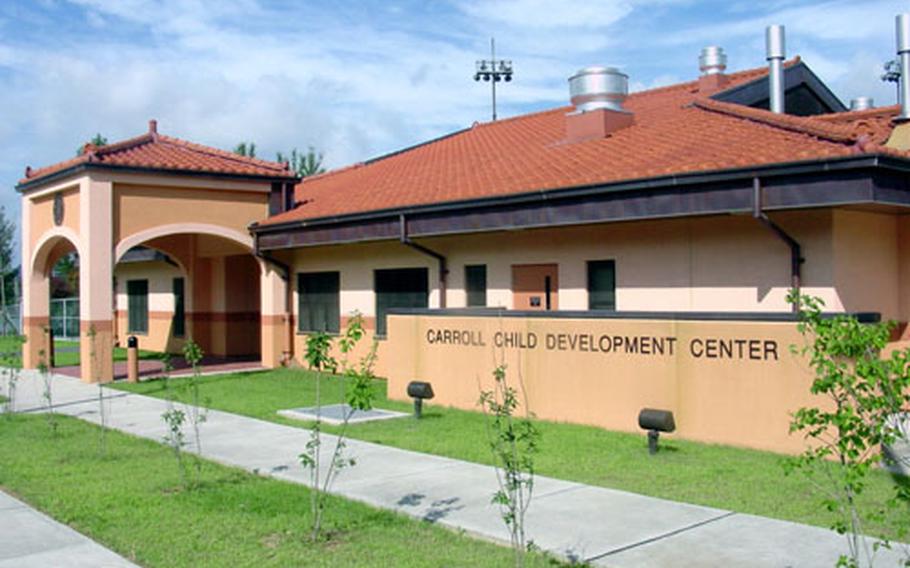 The Army in South Korea has opened a brand new child-care center at Camp Carroll in Weagwan. The $1.9 million Child Development Center opened Monday and will offer full- and part-time care for children ages six weeks to teens in the 12th grade.

In coming weeks, the center hopes to enroll children ages six weeks to five years. It plans to begin enrolling kindergarteners through 12th-graders this fall.

The center will serve those assigned to Camp Carroll, a 570-acre logistics base and headquarters of the U.S. Army Materiel Support Center-Korea. Some 1,510 active-duty U.S. troops, Defense Department civilians and contractors work at Carroll.

Until now, those living on or near the camp had to travel 40 minutes to 60 minutes to Camp George in Taegu to reach the nearest Army child-care center, said Lloyd Buster, Camp Carroll Child and Youth Services director.

A Camp Carroll survey identified 26 Camp Carroll-region U.S. military families who expressed an interest in some form of child care for infants and toddlers.

In addition, another 40 children were identified as potentially taking part in after-school programs for kindergarten through 12th grade.

&#8220;It sends a message to the soldiers and civilian employees that Camp Carroll is being taken care of,&#8221; said Wilfred Plumley, Camp Carroll installation manager, in an Army news release.

The one-story center has an infants and pre-toddlers room for children 2 and younger. It has cribs, strollers, a changing table, toddler-size table and chairs, child safety mats and &#8220;manipulatives&#8221; &#8212; spongy toys children can play with to develop hand- and-eye coordination and motor skills. The room also is fitted with toddler-size toilets and sinks and cubbyholes for the children&#8217;s use.

A room is set aside for kindergartners through sixth-graders in the School Age Services program. The room has a vinyl tent-like playhouse, toy kitchenette, doll house, a sand and water table with a plastic bin, tables and chairs, portable cots and various toys.

A third room, for teens in middle school through 12th grade, has two televisions, one with a home theater system for watching movies, a stereo system, a pool table and a table for playing checkers or cards.

Also in the center is a computer and technology lab; its three computers are to be used mainly by older children. Buster hopes eventually to hire someone to teach computer technology skills, he said.

Construction began in October 2001 and wrapped up in February.

Buster said families can phone Child and Youth Services for additional information at DSN 765-8824 from 5:30 a.m. to 6 p.m. Monday through Friday.