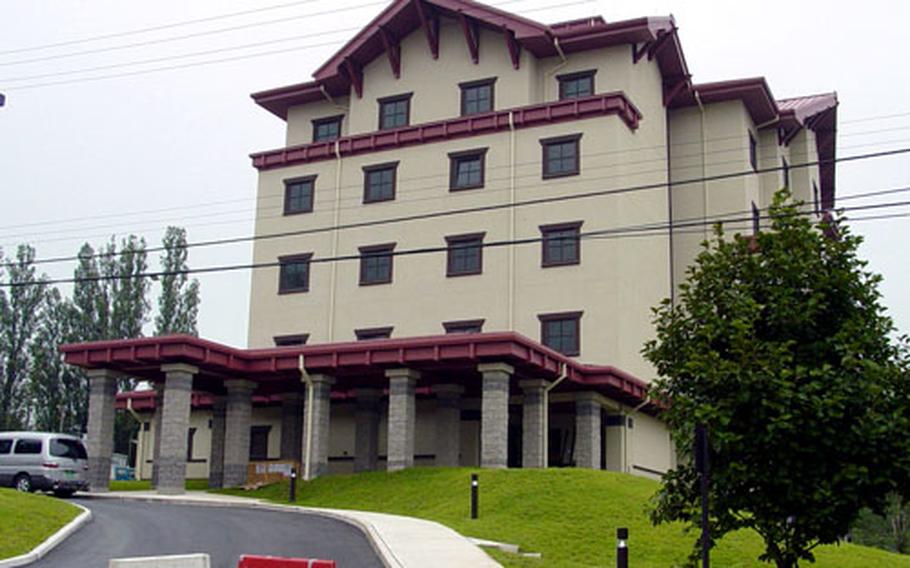 Workers are putting the finishing touches on a five-story, 50-room hotel at Camp Carroll in Waegwan.

Officials hope for a grand opening in November but are working toward a &#8220;soft opening&#8221; sometime in October, said Jake Sparks, lodging program manager with the Army&#8217;s Installation Management Agency-Korea Region Office.

The 43,700-square-foot Camp Carroll Army Lodge, once open, will offer 42 extended-stay rooms, three of them for physically disabled travelers, and eight suites, in Building S-100. The lodge will replace an older, 16-room hotel in Building S-141.

&#8220;This lodge will help us support the moves of units and families into this area by providing us with a new facility that meets the standards of lodging &#8230; being built throughout the Army,&#8221; Sparks said.

Each room will have a kitchenette with a small stove, TV, high-speed Internet connection, DVD player, microwave oven, and small refrigerator, among other amenities, officials said.

Sparks said the new lodge is in a convenient location.

&#8220;There was thought put into it,&#8221; he said. Being built across the street is a new bowling alley/club, and the food court is a two-minute walk, he explained.

The lodge is undergoing final inspection and workers are moving in furniture, office equipment and supplies, said Mee-jeom Green, Camp Carroll lodging manager. In addition, lodge staff are being trained in everything from using the phone system to reservation methods to basic maintenance.

They&#8217;re also learning how to set out a continental breakfast, which the lodge will offer free in the mornings.

The Byucksan Engineering and Construction Co. Ltd. started work in December 2004 on the $10.5 million project, under contract with the U.S. Army Corps of Engineers.

The hotel is hoping to start taking room bookings in early October, Sparks said. The number for reservations will be DSN 765-7722.