New buses doubling up the fun of Naples sightseeing 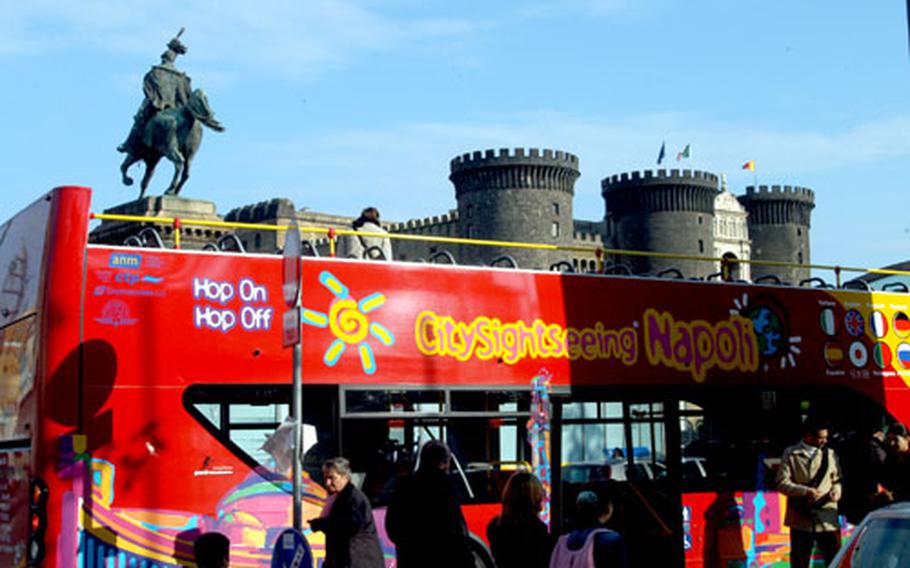 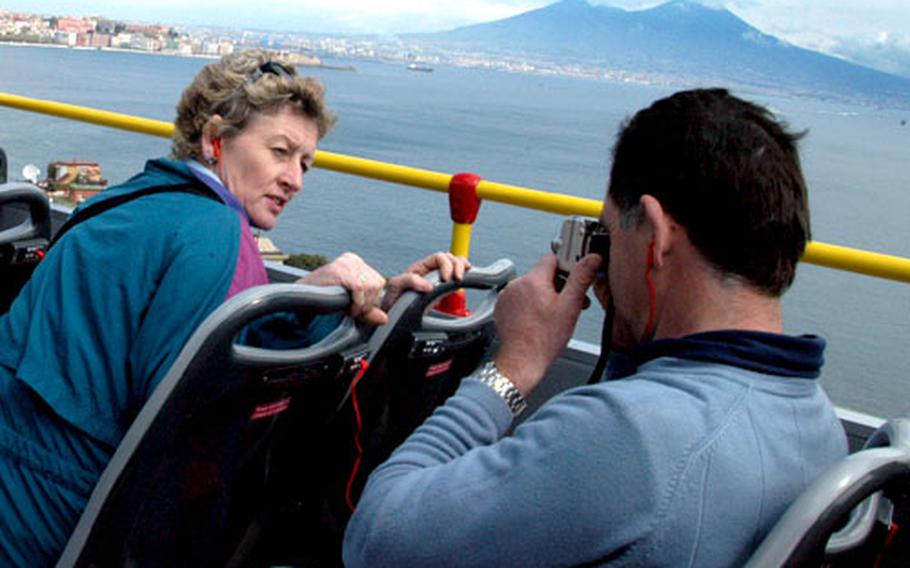 Marie Boyle poses for a photo with Mount Vesuvius in the background during a sightseeing tour of Naples. (Kendra Helmer / S&S)

NAPLES, Italy &#8212; Sightseers in Naples now have a way to get around the city in addition to driving in chaotic traffic or enduring jarring public transportation. They can take a double-decker tour bus.

City Sightseeing, a private company, began the service last week. It worked with the local government and came up with three routes for its hop-on, hop-off service.

A scenic tour offers 11 stops and panoramic views of the Bay of Naples, while a second loop, the art tour, has eight stops at museums and piazzas.

By May, the third route is scheduled to open to the Vomero shopping area, said employee Alessandra Arena.

She and the other Italian hostesses said they hope to help Naples, Italy&#8217;s third-largest city, overcome its reputation as a city of pickpockets and lunatic drivers.

The hostesses, all who speak at least two languages, have degrees in arts and languages.

The buses seat about 80 on two levels, including a roofless upper deck.

On Tuesday, as riders snapped photos, Neapolitans leaned out their balconies to wave, while others on the street stopped to gawk at the shiny red bus &#8212; a peculiar site compared to the dingy, orange city buses that rattle along the roads.

Frustrated drivers stuck behind the bus laid on their horns in a cacophony of beeps.

Plugging in their disposable earphones &#8212; with eight languages, including English, available &#8212; the sightseers listened to tidbits about points of interest. In between the history lessons, Neapolitan music plays.

One French family belted out an off-key &#8220;Funiculi Funicula,&#8221; much to the amusement of fellow passengers &#8212; including several curious locals who were along for the ride.

Another set of passengers, the Boyle family from Northern Ireland, found the bus route an easy way to see the city during their day-long visit.

She noted it would have been helpful if the audio guides or pamphlets offered more information on how to walk from the stops to area points of interest.

If riders don&#8217;t stop at any of the points, each route lasts about an hour. For those who get off, the trip takes longer. Sometimes much longer.

A bus is supposed to arrive at each stop every 30 minutes. On Tuesday, though, some waited an hour for a bus, stuck somewhere in the city&#8217;s typical rush-hour gridlock of cars.

The tour may have shiny new buses, but it is still Naples, after all.

Price of a ticket on a City Sightseeing bus tour is 16 euro for adults, 8 euro for ages 6-15 and 48 euro for a family (two adults and three children up to 18). Tickets are purchased on board and are valid for 24 hours for all lines.

In the summer, the lines will run until 11 p.m. A third line, to Vomero, is expected to open next month.

Start the tour at any stop, where buses are scheduled to arrive every 30 minutes. All the routes begin near Castel Nuovo at Piazza Municipio, across the street from McDonald&#8217;s. Park at the castle moat or the port.

City Sightseeing runs tours in 60 cities around the world, including Florence and Padua, Italy, and Palermo, Sicily.