New buildings under construction at Rota 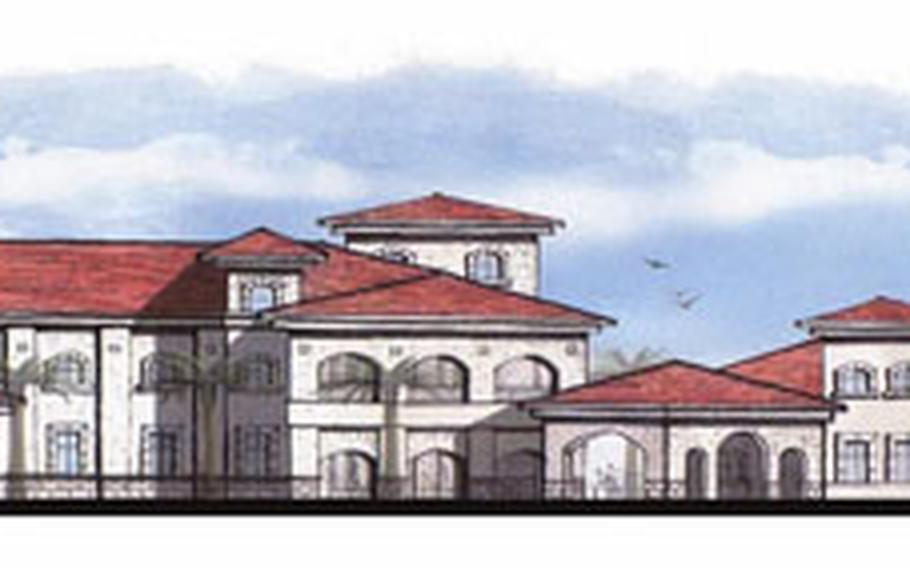 Construction of the $10 million command operations building, shown in this artist’s drawing, began in October at Naval Station Rota, Spain, and is expected to be done by late 2008. (U.S. Navy)

Construction crews at Naval Station Rota, Spain, recently started work on a new command operations building and will soon begin building a library. In a few years, they will also add a community support building.

The construction will relocate many of the base command and support facilities in one central, vehicle-free zone, according to information from Lt. Cmdr. Richard Hayes of Rota&#8217;s Public Works office.

All three buildings will be constructed along the pedestrian walkway area in the base&#8217;s &#8220;town center,&#8221; near the barracks, chapel and hospital by the Spanish construction firm of UTE Semi-Rafael Morales.

Construction on the $10 million command operations building began in October and is expected to be done by late 2008. Rota&#8217;s commanding officer and many staff members will have offices in the 45,445-square-foot building.

The base MWR offices and personnel support detachment will also call the two-story building home, as will Rota&#8217;s Navy Federal Credit Union branch.

Construction on the $1.9 million library is to begin this summer and will include an Internet cafe and coffee bar. The 7,911-square-foot building is also expected to open in late 2008.

Construction of the $3.9 million community support building, won&#8217;t begin until late 2008, but should be complete by spring 2009. The 19,946-square-foot building will hold the Navy College office and classrooms, Fleet and Family Service Center, American Red Cross, Navy and Marine Corps Relief Society and Navy Legal Service offices and courtroom.

The project, according to Hayes, will include the demolition of 20 old buildings.

&#8220;The overall intent of this project is to eliminate obsolete, outdated structures and consolidate the functions into modern, energy efficient facilities,&#8221; he said. &#8220;Most of the existing facilities are over 40 years old and have outlived their functional use.&#8221;