Jessica Redmond, author of “A Year of Absence.” ()

Jessica Redmond, author of “A Year of Absence.” () 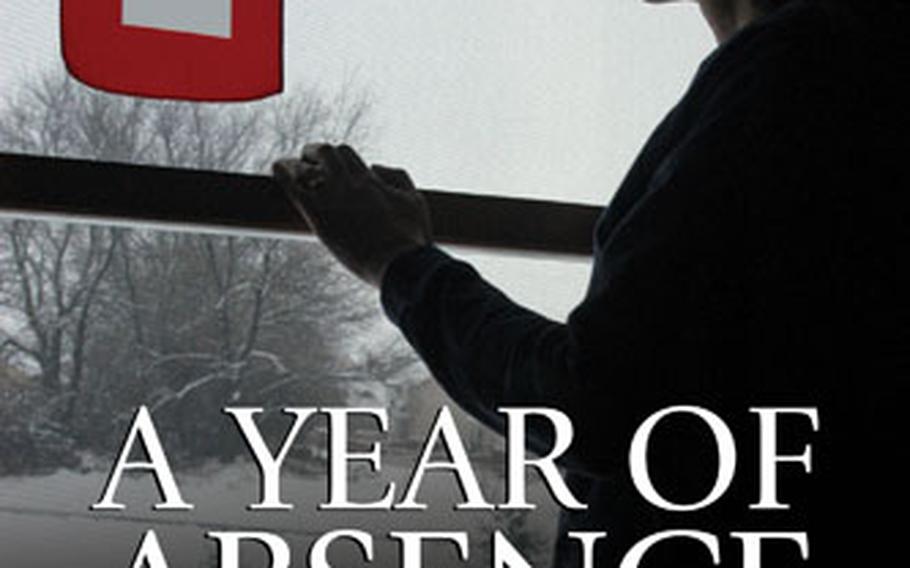 “A Year Of Absence” chronicles the lives of six Baumholder-based women whose husbands deployed to Iraq. (Courtesy of Survivingdeployment.com)

BAUMHOLDER, Germany &#8212; When her husband is at war, a soldier&#8217;s wife lives every day with the possibility that strangers will arrive at her door with the news that he&#8217;s dead &#8212; their children are orphans, and life, as she knows it, is over.

So when Army wife Jessica Redmond set out to chronicle the lives of six Baumholder-based women waiting for their husbands to return from Iraq, she said she was &#8220;conscious of not making tabloids out of these women&#8217;s lives.&#8221;

Stories of a lifestyle that revolves around &#8220;checking CNN to see if there have been any attacks &#8230; wondering whether your husband is alive or dead&#8221; are inherently dramatic, she said.

Since &#8220;The Illiad,&#8221; soldiers&#8217; lives have been celebrated and bemoaned as the toughest imaginable. But Redmond&#8217;s new book, &#8220;A Year of Absence: Six Women&#8217;s Stories of Courage, Hope, and Love,&#8221; explores what every soldier&#8217;s wife knows, but few outside the military culture comprehend: how much long separations and anxiety test the strongest, most self-sufficient and resilient wives.

Redmond, whose husband, Jon, was a captain with Headquarters, Headquarters Company, 2nd Battalion, 6th Infantry Regiment, comes to the subject as an insider.

After meeting in Budapest &#8212; he was in graduate school, she was a Peace Corps volunteer in Slovenia &#8212; the New York-born, Texas-raised Jessica Rosen married Redmond in 2002. Assigned to Baumholder, her husband immediately left for training at Hohenfels and Grafenw&#246;hr.

And then came the Iraq war, Redmond said.

Redmond said she came to understand that Army spouses&#8217; emotions are in &#8220;a pressure cooker, far more extreme than civilians endure.&#8221;

Although she gave each of the women a pseudonym, the stories of their lives are true. Redmond hopes readers will connect with Kristina, the 22-year-old German wife of a private. Or Teresa, who from the outside appears to have it all together, so much so no one suspects how much she&#8217;s struggling.

Tasha, a soldier herself, &#8220;thought she&#8217;d sail through this with 20 years in herself,&#8221; the author said. But Tasha isolated herself for months until she realized she was withdrawing, so she re-emerged and started connecting more with her church and choir, which gave her tremendous strength, Redmond said.

The 12-month deployment, then a three-month extension, pushed marriages to breaking point, with Diane seriously talking about walking out of hers. &#8220;They&#8217;re doing better now, but it took them 15 months to figure out what they could have lost,&#8221; Redmond said.

None of the women saw it coming. All thought they were days from having their husbands back.

Writing those chapters took her back to the extension, &#8220;and I would be sitting there crying. I got a box of tissues, sat there and cried and typed,&#8221; Redmond said.

Redmond said she expects those in the military to understand, but connecting to civilians will be tough. At the moment, the military families making the sacrifices for the war in Iraq and Afghanistan are not at the forefront of American consciousness.

&#8220;People are very much removed from this war, especially in Boston,&#8221; where Jon Redmond, who has left the Army, is working on a master&#8217;s degree in business at Harvard University. Friends tell her they are grateful there are people willing to take on such a demanding life, but the war doesn&#8217;t affect them personally, she said.

Like most great creative ideas, the seed of the idea came to Redmond in an epiphany.

At dinner one night in 2003, her friend and fellow military spouse, Meg O&#8217;Grady, suggested that maybe all military wives shouldn&#8217;t stay in Germany, waiting out the Iraq deployment on base; that maybe some would have difficult time coping.

Redmond says she initially wasn&#8217;t sure she had a book.

Helen Williams, whose husband, Lt. Col. T.C. Williams, was the 2-6 battalion commander, said she remembers Redmond, ironically, as not particularly active in FRGs or spouses clubs.

When Redmond came to her with the idea of writing the book, Williams helped put word out through the FRGs seeking interviews. Redmond got more than 50 responses in 48 hours, anxious to tell their stories.

However, the stories of their lives are true. All situations are correct as of April 2003, when the deployment began.

Diane Arnold, a 38-year-old Texan, works as a sorter in the base mailroom. Diane and Sgt. Thomas Arnold have been married 11 years, during which time he has been in and out of the Army. They have two children: Michael, 3, and Brian, 8.Kristina Hudson, 22, is German and grew up about 100 miles from Baumholder. She met Sgt. Scott Hudson through friends soon after he arrived in Germany. They&#8217;ve been married three years and have a 2-year-old daughter, Mari, and a newborn son, Tyler. Diane&#8217;s and Kristina&#8217;s husbands are in the same company.Beth Marshall, 26, has been married six years, and has a 2-year-old daughter, Katheryn. Beth&#8217;s husband, Doug, joined the regular Army from the National Guard as a specialist just months before the Iraq deployment. The couple met in Michigan and married while Beth was attending college in Arizona. Beth is a stay-at-home mom who is finishing her masters of business administration online.Teresa Murphy, 26, is a Mexican-American from Southern California. She met her husband, Danny, as a high-school sophomore. Danny, a first lieutenant, is an infantry platoon leader. They&#8217;d been married two years after dating through high school and college. Baumholder is their second duty station. Teresa works in the Education Center and is pursuing her master&#8217;s degree in human relations.Jena Rice, 33, is from Alabama. Rice and her husband, Pfc. Adam Rice, arrived in Baumholder just after he completed basic training, and a year before the deployment. They met while in high school and married soon after. Then, Adam Rice enlisted in response to the Sept. 11, 2001, attacks.Tasha Washington, 41, an African-American woman from rural North Carolina, served 20 years in the Army after enlisting out of high school. She has a 15-year-old daughter, Keisha, from a previous relationship. Tasha met and married her husband, Staff Sgt. Anthony Washington, while both were in the Army. Anthony, several years her junior, had been infantry for 11 years. Fearing simultaneous deployments, she retired before coming to Baumholder.Tasha&#8217;s, Jena&#8217;s and Teresa&#8217;s husbands are in the same company.

None of the six women has read the entire book, but each has read her own chapters, Redmond said.

The rest are &#8220;completely committed&#8221; to being Army spouses as long as their husbands are committed to being soldiers, she said.