New barracks on the way in Vicenza 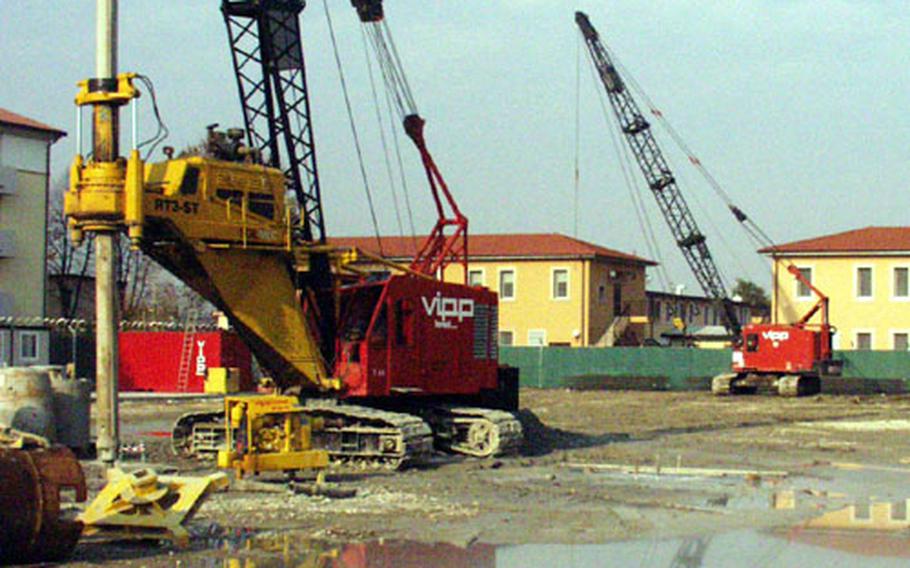 This former parking lot and vehicle inspection area at Caserma Ederle in Vicenza, Italy, will eventually turn into a barracks for soldiers. Buildings on two sites are now under construction, with 300 soldiers expected to move in sometime in 2005. (Kent Harris / S&S)

VICENZA, Italy &#8212; It&#8217;ll take a few years, but some soldiers at Caserma Ederle will eventually be able to move into new digs.

Construction is under way on two barracks on base that are projected to add accommodations for about 300 soldiers in late 2005. The two sites, which make up a project valued at more than 20.2 million euros, are part of a wave of new construction going on around the base. But it&#8217;s the first time in at least three decades that new living accommodations will go up on base.

&#8220;It will conform to the Army&#8217;s One plus One barracks standard,&#8221; said Chris Menia, supervisory general engineer for the Navy&#8217;s resident officer in charge of construction. The Navy is in charge of American military construction projects throughout Italy.

Two soldiers will share a common kitchen and bathroom and each will have his own bedroom. Kitchens will feature a refrigerator, cooking area and microwave. Rooms feature tile floors, air conditioning and ceiling fans as well as wiring so soldiers can plug in telephones, computers and televisions.

There also will be a few suites in one of the barracks for higher enlisted single soldiers, Menia said.

Each of the four-story buildings will also have common rooms, including areas for larger-scale cooking and laundry. They&#8217;ll also feature a mud room where soldiers can clean off their gear and a secure place to store weapons.

Basketball courts, picnic areas and parking spaces will also be constructed outside the barracks.

Currently, there&#8217;s room for about 1,100 soldiers to live on base. Dozens of military families live in the nearby Villagio housing area. Caserma Ederle isn&#8217;t as crowded as it would be these days, because most of the 173rd Airborne Brigade is deployed to Iraq.

The new barracks are designated for members of the 173rd. One is set to open in July 2005, with the other debuting four months later. Impresa Pizzarotti & Co. of Parma is handling the construction.