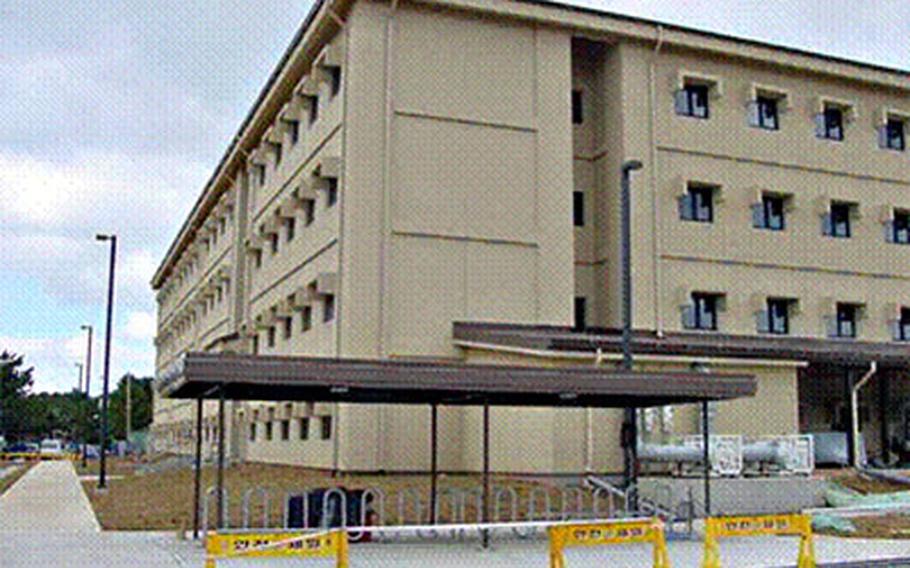 This newly-built dorm at Kunsan Air Base in South Korea will help cut the time newly-arrived airmen have to wait for a dorm assignment at the base, officials say. Construction will soon begin on another dorm, and two more are in the planning stages. (Courtesy of U.S. Air Force)

PYONGTAEK, South Korea &#8212; Newly arrived airmen at Kunsan Air Base in South Korea will face shorter waits for a dorm room thanks to a new barracks now open for occupancy, officials said.

Kunsan&#8217;s airmen often spend one to two months in temporary lodging while waiting for a dorm room to free up. But the new barracks could slash weeks off the waiting time, said Air Force 1st Lt. Lori Begley, the 8th Civil Engineer Squadron&#8217;s Housing Flight commander.

The austere base, on South Korea&#8217;s western seacoast, is home to the 8th Fighter Wing, known as the Wolf Pack.

Airmen at staff sergeant rank and below have had to double up in existing dorm rooms because the base has been short 754 rooms, she said.

Work is to go forward soon on a second new dorm and two more are in the planning stages, Begley said.

&#8220;That should clear all of our deficit&#8221; once the remaining three buildings are finished, she said.

Airmen room two to a suite with a shared bath; each airman has an individual room with a large walk-in closet, Begley said.

Also in each suite is a kitchen with a stove, microwave oven and refrigerator, she said.

On the first and third floors are a laundry room, each with 11 washers and dryers.

And on each floor is a recreational lounge and three storage rooms in which each airmen is assigned a lockable cage for storing luggage and other bulky property.

The Nam Hwa Construction Co. Ltd. built the dorm under contract with the U.S. Army Corps of Engineers. Work began in April 2003 and finished last month.