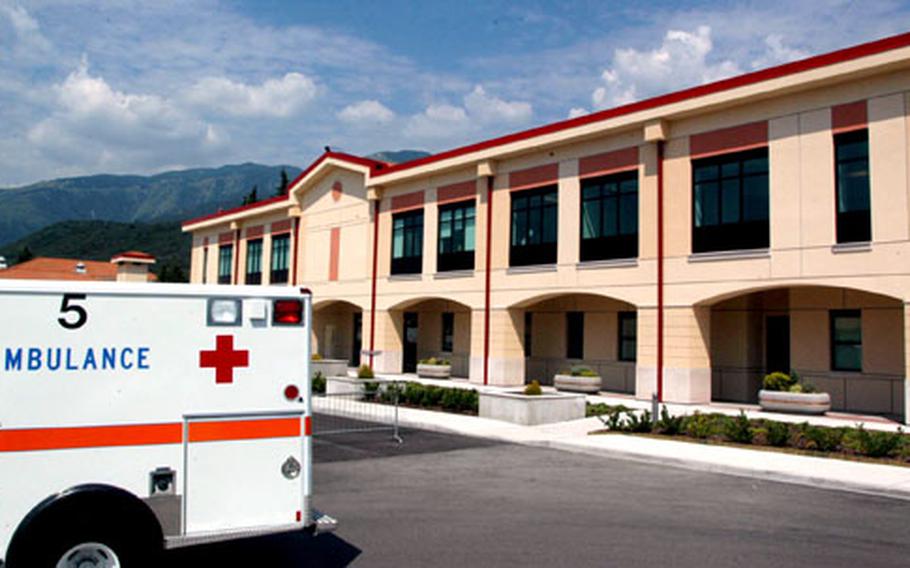 The new hospital at Aviano Air Base in Italy is open for business. The $36.9 million project is on the same site as the medical center it replaces, but boasts 90,000 more square feet. (Kent Harris / S&S)

Visitors got a chance to see Aviano&#8217;s new $36.9 million hospital on Tuesday, though the facility started treating patients earlier this month.

The first surgery was performed Monday.

The 18-bed hospital sits on the same site as the old clinic &#8212; parts of which are still being used. The Air Force awarded a contract to begin construction in 2001, but construction stopped at one point because the contractor ran into financial problems. Bilfinger-Berger, a construction firm based in Mannheim, Germany, took over and completed the project. The firm has completed a handful of high-profile projects on base, including the base theater, child development center and youth center. Work on the second phase, which involves remodeling and further incorporating the adjoining clinic, begins shortly.

Lt. Gen. Robert Bishop, vice commander of U.S. Air Forces in Europe, complimented all those involved in the project and said the opening sends a message that airmen will be stationed at Aviano for the foreseeable future.

&#8220;It also reaffirms the deep commitment that we in the United States Air Force have for taking care of our military members and their families,&#8221; he said.

For the last decade, expectant mothers have checked into a leased facility in nearby Sacile to give birth. That facility will now close.

Col. Michael Schaffrinna, the 31st Medical Group commander, said the added services now mean the facility on base can be called a hospital. Most of those treated will continue to be seen during the former clinic&#8217;s daytime hours, though there are plans to add more medical personnel for expanded nighttime and weekend services.

Col. Mark Ediger, the USAFE surgeon general, said more changes are in store for the facility. USAFE fields three expeditionary hospitals at RAF Lakenheath in England and Spangdahlem and Ramstein in Germany. The facility in Spangdahlem will be downgrading to a clinic and its designation will move to Aviano next summer, he said.

The new hospital, which boasts about 90,000 square feet of additional space, features a pair of operating rooms and three expansive rooms for mothers to give birth. Aviano&#8217;s operation in Sacile averaged about 30 births a month.

There&#8217;s a possibility the base might take on some of the obstetrics work from smaller bases in southern Europe as well. And several of those speaking at the ribbon-cutting ceremony noted that the hospital is designed to take on extra personnel for expanded operations in case of a NATO contingency. The alliance footed all the money for the facility as part of the ongoing Aviano 2000 construction program.

In addition to expanded space for nearly every department, the facility boasts an array of new equipment, including a digital X-ray machine built by General Electric that is reportedly the first to be installed in Europe.

Schaffrinna said the medical group will continue to refer patients who need specialty care to Italian caregivers, including hospitals in Pordenone and Udine. But the dozen or so mothers whose delivery dates are nearing should be able to check in during the next week.