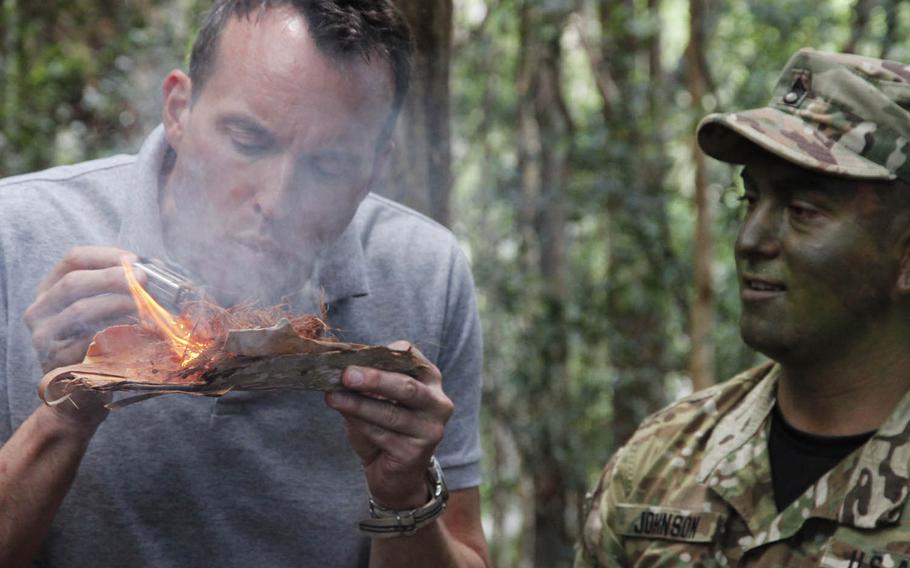 Buy Photo
Secretary of the Army Eric K. Fanning creates fire from a 9-volt battery and steel wool during a tour of 25th Infantry Division's Lighting Academy jungle training in Hawaii, Tuesday, July 26, 2016. Fanning will also visit Guam, Japan and South Korea on his first tour of the Pacific since taking over the position in May. (Wyatt Olson/Stars and Stripes)

Buy Photo
Secretary of the Army Eric K. Fanning creates fire from a 9-volt battery and steel wool during a tour of 25th Infantry Division's Lighting Academy jungle training in Hawaii, Tuesday, July 26, 2016. Fanning will also visit Guam, Japan and South Korea on his first tour of the Pacific since taking over the position in May. (Wyatt Olson/Stars and Stripes) Buy Photo
Secretary of the Army Eric K. Fanning talks with soldiers about a robotic device during a demonstration at Bellows Air Force Station, Hawaii, Tuesday, July 26, 2016. Fanning kicked off his first tour of the Pacific Tuesday with demonstrations of the service's high-tech and basic jungle know-how. (Wyatt Olson/Stars and Stripes) 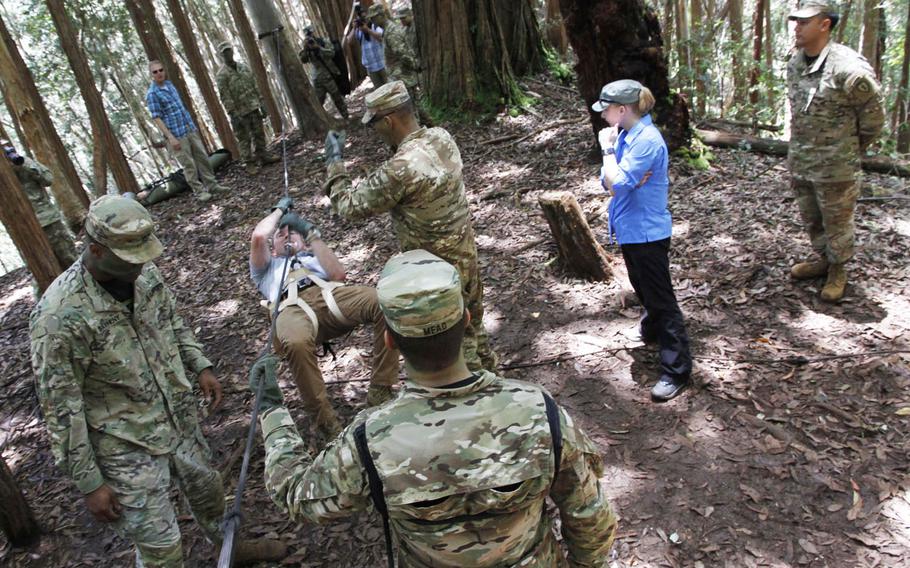 Buy Photo
During a tour of the 25th Infantry Division's Lighting Academy jungle training in Hawaii on Tuesday, July 26, 2016, Secretary of the Army Eric K. Fanning tests his skill at crossing a span via rope. (Wyatt Olson/Stars and Stripes)

SCHOFIELD BARRCKS, Hawaii — From robots to rubbing two sticks together for fire, Secretary of the Army Eric K. Fanning kicked off his first tour of the Pacific on Tuesday with demonstrations of the service’s high-tech and basic jungle know-how.

Fanning, who took over the position in May, visited the 25th Infantry Division’s Lightning Academy jungle training, where he tried his hand at starting a fire with a 9-volt battery and steel wool, hoisting a heavy litter up a hillside and scrambling across a rope line.

He also visited demonstrations of a half-dozen robot prototypes from the Army’s Pacific Manned-Unmanned Initiative, or PACMAN-I.

Several of the robots looked like miniaturized tanks and could be used for gear transportation, surveillance or remote-controlled weapons. Others were small flying drones.

For example, the payloads on the 600-pound MUTT — Multi-Utility Tactical Transport — could be swapped out depending upon mission. During the demonstration, it sported a remote-controlled M2 .50-caliber gun.

“As we focus on trying to make sure we’re prepared for increasingly creative adversaries and emergent threats, we need to make sure we’re fielding new technology as quickly as we can,” Fanning told reporters after the demonstrations.

There are two important elements to dealing with emerging threats, he said, starting with building and procuring the right technology.

“But the second is actually getting it into the field; getting it into the hands of soldiers,” he said. “What’s great about PACMAN today is, we did that. We took these new things and we gave them to soldiers and we had them exercise with them and give us their feedback on what they think is best, how they’d improve it, how they’d use it. There was clearly a lot of excitement out there.”

“His theme was that we’d spent that past 15 years developing great equipment for the soldiers, but primarily for Afghanistan and Iraq,” he said. “Then in 2013 we had the pivot to the Pacific, and he was concerned that a lot of the initiatives for concepts and capabilities were more focused on that region rather than the Pacific.”

Among those PACMAN-I robots is a GPS-guided helicopter about the size of a wren called the Black Hornet 2. Built with several high-definition cameras inside, the device was being tested at the squad and platoon level for pinpoint surveillance.

“In the air, about 20 meters over your head, it looks like nothing more than a hummingbird,” Staff Sgt. Brock Roe said. “And there’s no sound disruption. This is so quiet that we can hover about 10 feet over your head and you’d never even know it’s there.”

The 25th Infantry’s jungle training was established several years ago to break away from Army’s Afghanistan-Iraq mindset, Fanning said.

“We are focused in the Army getting back to full-spectrum training, training for all sorts of different fights,” he said. “That was clearly evident by the jungle training today.”

The Army is a “critical part” of the Pacific region’s missile defense, Fanning said.

His next stop is Guam, where he will tour the Terminal High-Altitude Area Defense, or THAAD, installation, which is intended to defend against North Korean missiles. He said it will be the first time he’s seen the advanced missile defense system, a version of which will be deployed to South Korea by the end of next year.

Fanning’s tour will continue in Malaysia, where the Army is conducting a Pacific Pathways exercise. From there he’ll head to Japan and then South Korea, where he will visit the 35th Air Defense Artillery Brigade at Osan Air Base.

Fanning said the Army is working on a number of missile defense initiatives but could not provide details at this point.

“We can only get at an increasingly creative adversary — a number of different adversaries — if we think more jointly and more creatively,” he said, noting that the ongoing Rim of the Pacific exercise in Hawaii demonstrated that Army helicopters could be used in new ways, including shooting air-to-ship missiles.