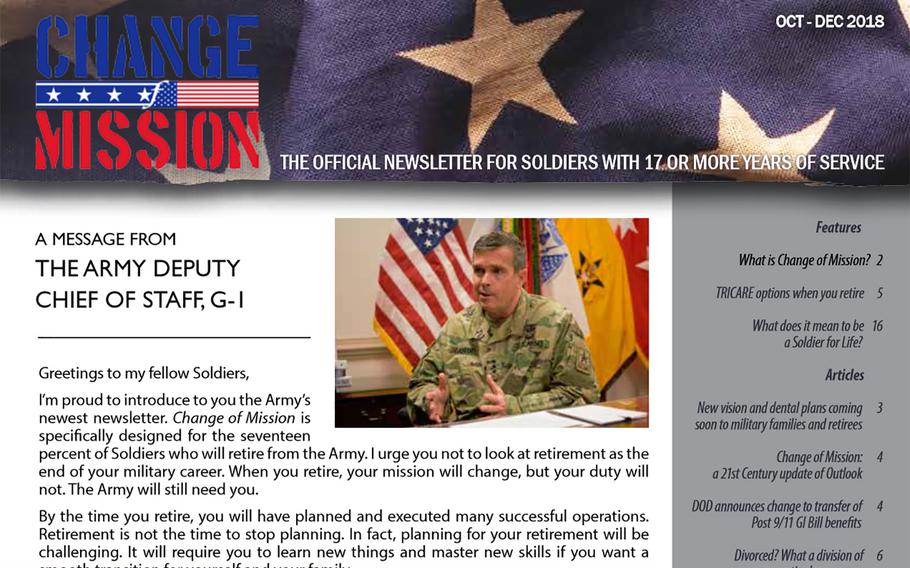 The first issue of "Change of Mission" is out. (U.S. Army)

WASHINGTON – Some 17,000 soldiers across the Army’s active duty, reserve and National Guard force will receive a new emailed newsletter on Monday, as the service attempts to better prepare anyone who has served 17 or more years for their eventual transition to retirement.

The email newsletter entitled “Change of Mission” will be sent quarterly to all soldiers within three years of reaching the 20 years of service typically required to retire from the military, according to officials with the Army’s Soldier for Life program.

Mark Overberg, a retired lieutenant colonel in charge of the Soldier for Life’s Army Retirement Services, hopes soldiers will take some time to read the newsletter and not simply hit delete. Not only will it help educate future retirees about decisions they must make before leaving the Army, but it will also encourage them to continue advocating for the service once they leave uniform, he said.

“Our senior soldiers are leaders, and they have full-time day jobs,” Overberg said this week in an interview during the Association of the United States Army’s annual conference in Washington. “Preparing for retirement is a whole other job on top of that, so by doing this starting off at the 17-year mark we are trying to give them enough time to understand all these various topics and get them to the point, when they retire, the Army is taking care of them and they are set up properly and looking back, they are happy about their service.”

The newsletter’s launch comes at a time when the Army is looking to increase the size of its force but missed its recruitment goal for the first time in more than a decade. The service views retired soldiers and others who have left the Army as potential unofficial recruiters who could help boost efforts to attract new soldiers, said Army Col. Prescott Farris, who recently took command of the Soldier for Life program.

Some 80 percent of new recruits who enlist in the Army in any given year either have a close relative who served in the military or know a veteran who encouraged them to serve, Farris said. Those veterans can serve as ambassadors to potential recruits.

“It’s very important from a [combat] readiness perspective that we continue to recruit and retain the very best,” Farris said. “So, when those soldiers do decide to leave the services, it’s important that they continue to tell that positive Army story out there to their communities where those who could serve in the future are.”

The Army is attempting to better commit to soldiers who will retire in the future than it has throughout much of its past, said Overberg. Until the last couple of years, the service waited until nearly the final few months of a soldiers’ career before preparing them for retirement.

Those days are over, Overberg said. The “Change of Mission” newsletter is a start.

“What we’re talking about here for the Army is culture change,” he said. “It used to be when somebody would [end their service] or retire it was just out the door. We’re trying to change that so that transitioning to retirement is not a bad word. We need people to understand that the Army still needs them to operate and help us once you’ve left the service.”