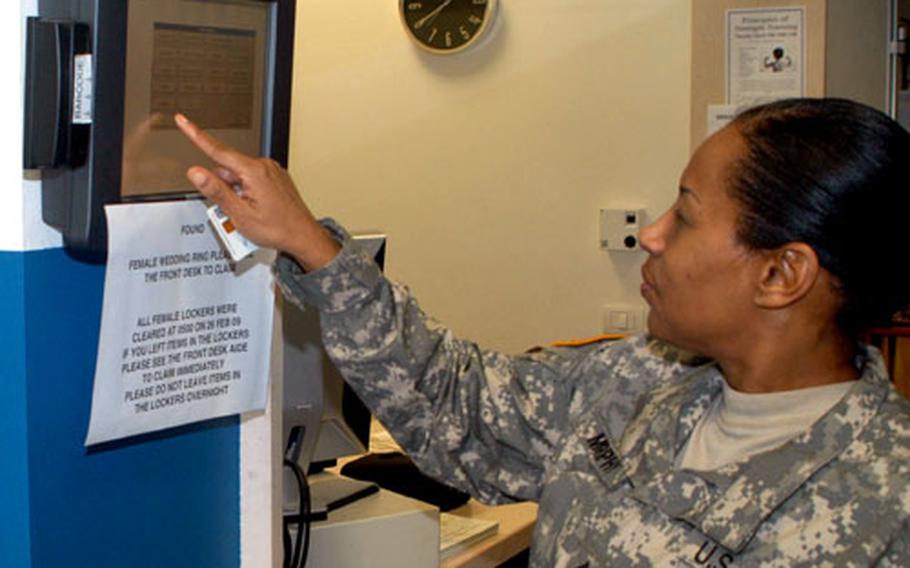 Command Sgt. Maj. Carlin Murphy of the 14th Transportation Battalion, signs in at the fitness center at Caserma Ederle in Vicenza, Italy, using the RecTrac system being used at some MWR facilities in Europe. (Ryan Dillon / U.S. Army)

If you&#8217;re planning to use an Army Morale, Welfare and Recreation facility around Europe in the future, you&#8217;re going to have to provide some personal information.

Such information is put into the RecTrac system and is primarily used to track usage of MWR facilities, according to Melanie Reagin, functional administer for Installation Management Command-Europe Morale, Welfare and Recreation.

The system has been in use at some Army posts in Europe since 1999, she said. But its recent introduction at other sites has elicited concern about why the information &#8212; including the sponsor&#8217;s Social Security number &#8212; is needed and how it will be used.

"It is a big change and we know that customers do get upset," Reagin said of the new requirements for some communities.

Personnel at Heidelberg, Stuttgart, Bamberg, Baumholder and Garmisch in Germany, and in the Benelux will probably be seeing the most change. But various facilities at other installations that haven&#8217;t been using RecTrac will also be doing so, she said.

Customers are required to swipe their Department of Defense ID cards each time they use an MWR facility as part of an IMCOM requirement, Reagin said.

A standard sign-in sheet at the door is insufficient, she said, because the usage information would have to be entered into a computer manually. Local officials need to know when their facilities are being used, Reagin said, and they must be able to back that up to receive funding to keep them open.

"We have to spend soldiers&#8217; money wisely," she said. So a facility that doesn&#8217;t get a lot of use might be facing a reduction in staff or hours. And busy places might see expanded hours or more personnel assigned.

She said there are several other uses for the information. Personal contact information allows staff members to notify relatives in case of an emergency. Those signed up for classes can receive e-mail messages when an instructor is sick.

In addition, in a few years, users should be able to use the system to pay for MWR programs by inserting their credit cards. That&#8217;s currently being tested in Schweinfurt, Germany.

Reagin said that although the system probably has the capability to allow commanders to see if individuals in his unit are visiting the fitness center as often as they are supposed to, it&#8217;s not being used that way. Army law enforcement agents have accessed information in the system during their investigations, though, she said.

Reagin said access to information such as Social Security numbers is limited to system administrators and can&#8217;t be gained by the public or those working in MWR facilities.

"We&#8217;ve met all the Army requirements, so the system is really secure," she said.