New Army lodge in Belgium should open next summer 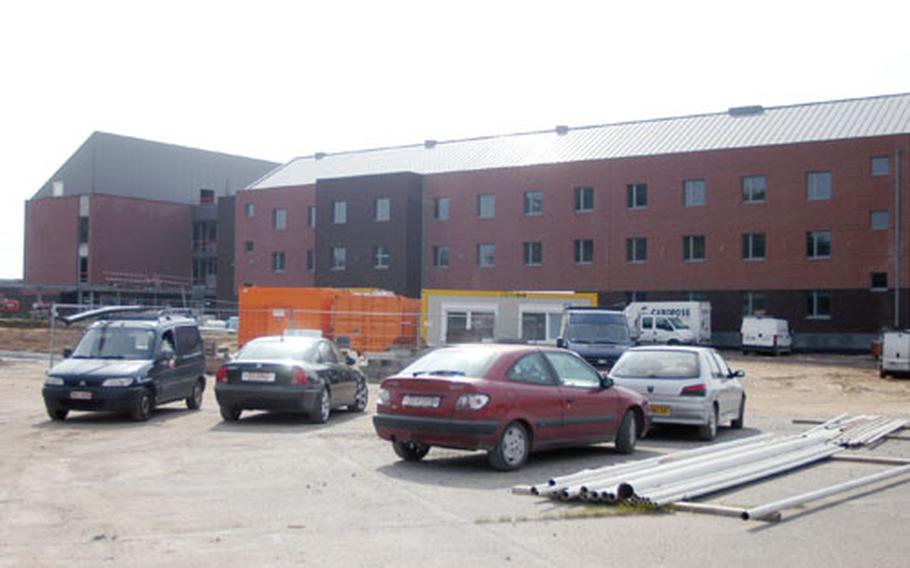 A hotel is currently under construction at Chievres Air Base, Belgium. Community officials expect it to be completed early next summer. (Kevin Dougherty/S&S)

CHIEVRES, Belgium &#8212; Barring any major delays, the Army expects to open its new $19.5 million lodge at Chievres Air Base early next summer.

And shortly thereafter, the community plans to cut the ribbon on a $16 million commissary being built on land adjacent to the post exchange, officials said.

The construction projects &#8212; and others in various stages of completion in Brussels, and Brunssum, Netherlands &#8212; are further indication the U.S. presence in the Benelux will remain for many years to come.

In the past several years, the list of construction projects for the entire Benelux community has totaled well over $75 million.

Essentially, much of the Benelux military community exists to support U.S. servicemembers and civilians assigned to NATO. Chievres Air Base and nearby Daumerie Caserne, for example, support personnel assigned to Supreme Headquarters Allied Powers Europe headquarters in nearby Mons.

"Whenever I see something new going up, I&#8217;m like a little kid at Christmas," said Bill Cook, who manages the current lodging facility, Hotel le Maisieres.

Cook was talking about his baby, the 94-room lodge that he will manage.

Each of the suites comes with a kitchenette and a small living room.

With the exception of the front entrance, much of the outer structure is completed, Cook said.

Landscaping work will begin in November and Cook expects to take possession of the keys to the hotel in late March.

It&#8217;ll take at least a couple of months to make minor fixes and haul in the furnishings.

"Basically, it will have all of the amenities that a commercial hotel has back in the States," Cook said.

The new hotel will save the Army about $1.4 million a year, according to figures supplied by Marie-Lise Baneton, spokeswoman for the Benelux community.

Half of the savings will come from no longer having to rent Hotel le Maisieres.

The rest comes from not having to pay for a guard contract.

"One of the biggest advantages is that hotel guests will be within walking distance of the PX and commissary," said Col. James Drago, the U.S. Army Garrison Benelux commander.

The new commissary, which is also under construction, isn&#8217;t far from the current facility.

It will have larger display areas, wider aisles and about a third more floor space.

The tentative date for its grand opening is September 2009.