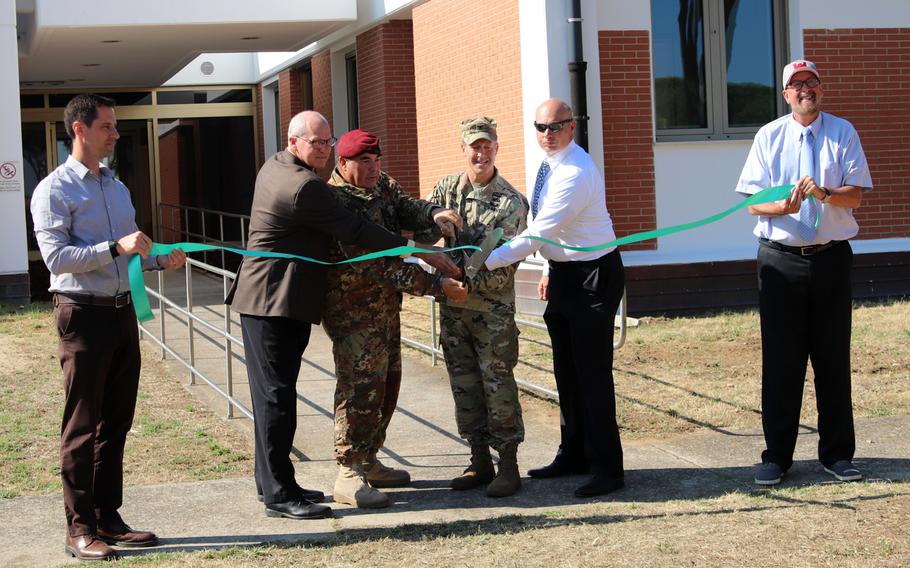 U.S. Army Col. Erik Berdy, third from right, and Italian Col. Renato Vaira cut a ribbon at the opening of the new Camp Darby headquarters on Wednesday, July 17, 2019. Part of Camp Darby is scheduled to be returned to Italy by the end of October. (Norman Llamas/Stars and Stripes)

CAMP DARBY, Italy — The Army took a step Wednesday toward returning a portion of Camp Darby to Italy as part of a Defense Department consolidation project expected to save the U.S. around $500 million annually.

Members of the command team of U.S. Army Garrison Italy and the Darby Military Community inaugurated a new garrison headquarters on the southern part of the base, which they will move to after turning the northern part of the base over to the Italians by the end of October.

“The Camp Darby mission will not be affected by this consolidation,” said USAG Italy commander Col. Erik M. Berdy, who was on hand for a ribbon-cutting ceremony. “We do have a lot of work to do since all the facilities, currently located in the north side of the post, have to relocate to the southern part of the post.”

The return of a portion of Darby, located on the northern Mediterranean coast near Livorno, was agreed to under the European Infrastructure Consolidation process announced in 2015. The EIC proposed consolidating or fully returning bases in Belgium, Germany, the Netherlands, Portugal, the U.K. and Italy to the host countries.

Camp Darby has been a permanent U.S. Army facility since 1952.

Over the years, it has housed Army, Air Force and Defense Department operations, including the Combat Equipment Battalion-Livorno, which stores and maintains pre-positioned equipment and vehicles, and the 839th Transportation Battalion, which runs the seaports supporting U.S. military operations throughout the Mediterranean.

But the U.S. military population on base has fallen to just over 100 airmen with the 731st Munitions Squadron.

That squadron and the Army’s pre-positioning mission will remain at Darby, said Chiara Mattirolo, a spokeswoman for the base.

The Italians plan to use their portion of Camp Darby to house the headquarters of a special operations regiment and a support battalion, said Col. Renato Vaira, commander of the Italian army garrison at Darby.

Vaira said the extent of collaboration between U.S. and Italian forces would be decided by the governments of the two countries.

“There will still be internal access between the two bases,” Vaira said. “It’s important for us to have that as it will help with security of the installations.”