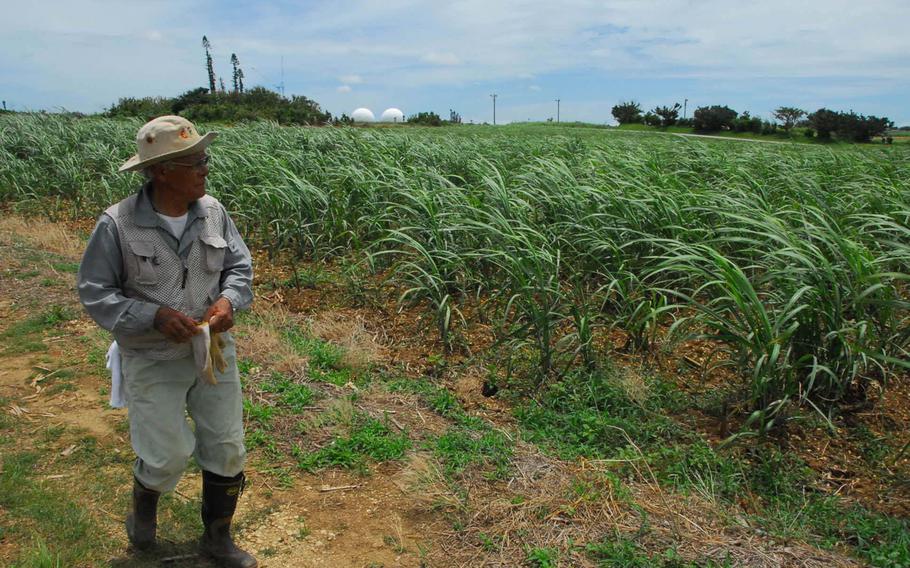 Buy Photo
Farmer Kunio Ikehara, 75, walks the perimeter of his sugarcane field at Torii Station on Okinawa as an Army communication facility stands visible in the background. (Travis J. Tritten/Stars and Stripes)

Buy Photo
Farmer Kunio Ikehara, 75, walks the perimeter of his sugarcane field at Torii Station on Okinawa as an Army communication facility stands visible in the background. (Travis J. Tritten/Stars and Stripes) Buy Photo
Farmer Kunio Ikehara, 75, walks the perimeter of his sugarcane field at Torii Station on Okinawa with an Army communication facility visible in the background. The Army has told Ikehara that he, along with 460 other farmers, will soon lose some of their farm land to make way for new military construction projects. (Travis J. Tritten/Stars and Stripes) Buy Photo
Farmer Kunio Ikehara, 75, checks a row of taro plants for catepillars while walking his farm on the Torii Station Army base in western Okinawa. Ikehara's sugarcane field and an Army communication facility are visible in the background. The Army has told Ikehara that he, along with 460 other farmers, will soon lose some of their farm land to make way for new military construction projects. (Travis J. Tritten/Stars and Stripes) 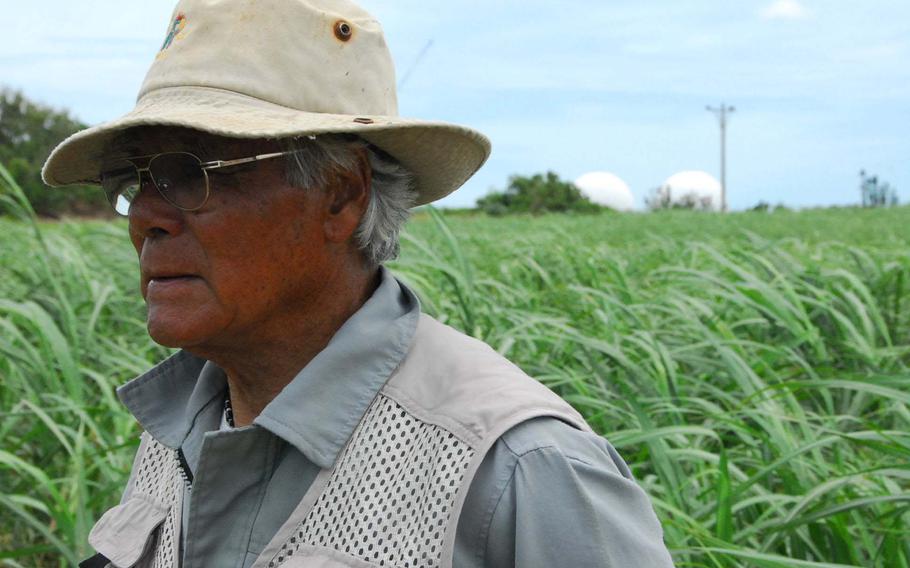 Buy Photo
Farmer Kunio Ikehara, 75, walks the perimeter of his sugarcane field at Torii Station on Okinawa with an Army communication facility visible in the background. (Travis J. Tritten/Stars and Stripes)

CAMP FOSTER, Okinawa — Shouts and laughter from an Army recreation beach drift over Kunio Ikehara’s cane field. Out past the swaying leaves are a military parking lot and a helicopter pad.

The 75-year-old is used to sharing his land with the U.S. military. He is among 460 farmers who till sun-shot fields inside the fences of Torii Station, a sleepy seaside Army base in central Okinawa.

The Army has allowed the surrounding community to continue farming on most of the base since it took control of the land and relocated owners after World War II. But that long-standing arrangement may be shifting with new development plans.

Last year, Ikehara was notified that 17 percent of his property can no longer be farmed due to new construction on the base. In all, a wave of development projects will eliminate 156 farm plots across Torii Station beginning next year, according to Army plans released to the public in June.

A coming realignment of U.S. military forces on Okinawa may also replace many more farms with Army warehouses in the coming decade, casting further uncertainty on the way of life and livelihood of those who have grown crops on the land for generations.

“I know it is just a matter of time before the farmland around here is used for some military facilities,” Ikehara said, motioning toward the surrounding fields.

Like many who farm on Torii Station, Ikehara uses income from his 10 acres to supplement retirement, but also depends on the work to stay connected with ancestral land.

“Tending our family farm is important to me because I grew up watching my parents working hard here,” he said, looking fit and tan.

Family history on the property dates back six generations. A stump near his equipment shed is all that remains of a banyan tree the Japanese imperial army commandeered for a machine gun nest in the days before the Battle of Okinawa when Ikehara was just 7.

U.S. forces began shelling the island soon after, and his family was pushed off the land. When the war ended, they found their home fenced off by the military.

Ikehara finally returned to farm the property in 1996 under the Army arrangement while he continued a career as a traffic control officer.

Now in retirement, his sons and grandchildren often come to help with the sugarcane and other crops such as taro and Japanese mountain potatoes.

But Ikehara’s income is dropping. The new military development has reduced his sugarcane yield, which had been the largest on the base for years.

The loss was caused by four construction projects slated to break ground on Torii Station in 2014 and 2015.

About 50 of the 320 acres of farms on the base were seized for the projects, according to the Military Land Reutilization Promotion Division in Yomitan Village, a town next to Torii Station.

The U.S. military declined to comment for this story.

The land has shrunk, but not the number of farmers. They each now work smaller tracts due to sharing arrangements, said Norihiko Ikehara, ward chief of the Sobe community, which borders Torii Station.

The reduced income may sting Ikehara less than other farmers. As a property owner, he can continue collecting rent from the Japanese government for Army use of the land, even if he grows no sugarcane. It is a common arrangement among property owners on Okinawa, where the U.S. maintains the largest concentration of bases in Japan.

But many Torii Station farmers lease their fields from owners. They do not receive rent checks and depend solely on selling their purple sweet potatoes and other crops to local markets and food producers for primary income or to help fund retirement.

The loss of land and a growing uncertainty for the future of farming has been deeply troubling for Sobe, where most of the base farmers live. The town recently filed a complaint with the Japan Ministry of Defense demanding no further reductions in farmland on the Army base.

For Sobe, access to the fields is part of a promise made generations ago, said Ward Chief Ikehara, who is not directly related to Ikehara the farmer.

The Army took control of the Torii Station property after the war and in 1952 struck a relocation agreement with the Okinawans who lived there, Ikehara said.

Under the agreement, they would relocate to the adjacent land that became Sobe; in return, the Army would continue to allow farming on Torii Station, he said. The service also built a water main and provided each family with relocation money.

The town’s dense development and narrow, grid-like streets leave no room for crops and remain a sharp contrast to the winding roads and open fields just past the base fence.

For farmers, the base still represents one of the only options to keep working, but the Army’s promise appears to be slipping.

More land may be lost in the coming years from a realignment of U.S. military forces on Okinawa. Torii Station is slated to take on facilities from bases in the south that could close in the next decade as part of a U.S.-Japan agreement to decrease the large military presence on the island.

Three Army warehouses will be relocated to Torii Station from Marine Corps bases sometime after 2024, according to a new Okinawa military consolidation timeline released in April by the two countries.

Since most of Torii Station’s open space is farmland, it is likely the relocation work will eliminate more arable land and further squeeze the farmers’ livelihoods.

But the effects are still unclear. In June, Okinawa Gov. Hirokazu Nakaima asked Prime Minister Shinzo Abe to release details on the U.S.-Japan accord on relocating facilities and how it will affect local communities, including the farmers.

“We need more information on the realignment plan,” said Osamu Unten, chief of the military affairs office in the Okinawa prefectural government. “In the released plan, it merely states storage will be relocated, for example, but it is unknown how much area will be impacted and how many troops will be moved.”

Unten said farmers deserve to know so they can plan for the future.

Betting on an uncertain future

Despite the uncertainty, Ikehara the farmer recently invested $100,000 in farm machinery. There is a new tractor and a cane harvester. He hopes the investment will pay off for his family, which now includes 12 grandchildren.

“My oldest son is in his 50s, and after he retires from his job, I am expecting that he will take over here,” he said.

In the meantime, Ikehara has no plans to stop farming. Sometimes while sipping jasmine tea in the shade at the edge of his field, he still dreams of a home on the property, near the family tomb that holds the remains of his ancestors.

“It will be nice if I can go back to my ancestral land to live,” he said.