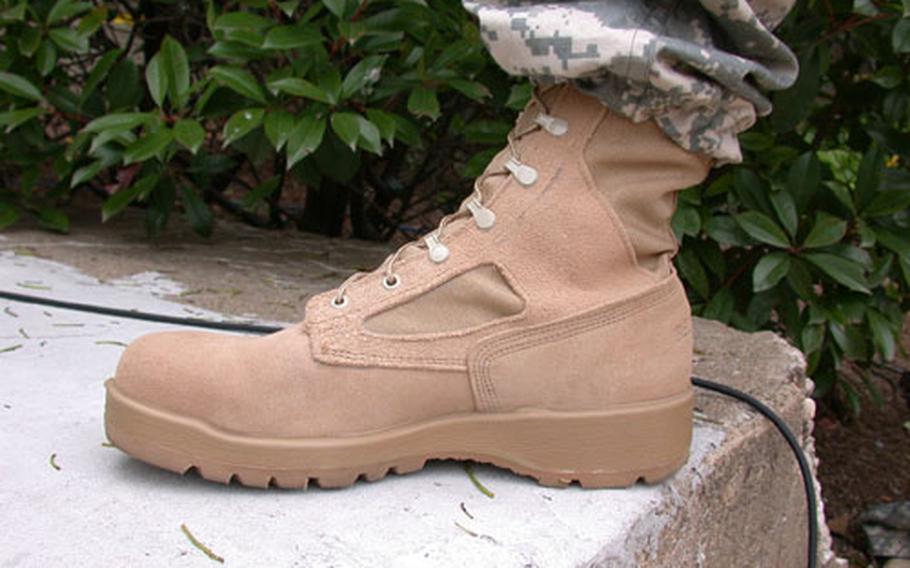 The new Army boots come in two versions, both of which are tan-colored suede: a hot-weather version; and a “temperate climate” boot with Gor-Tex liner. (Lisa Burgess / S&S)

The new Army boots come in two versions, both of which are tan-colored suede: a hot-weather version; and a “temperate climate” boot with Gor-Tex liner. (Lisa Burgess / S&S) 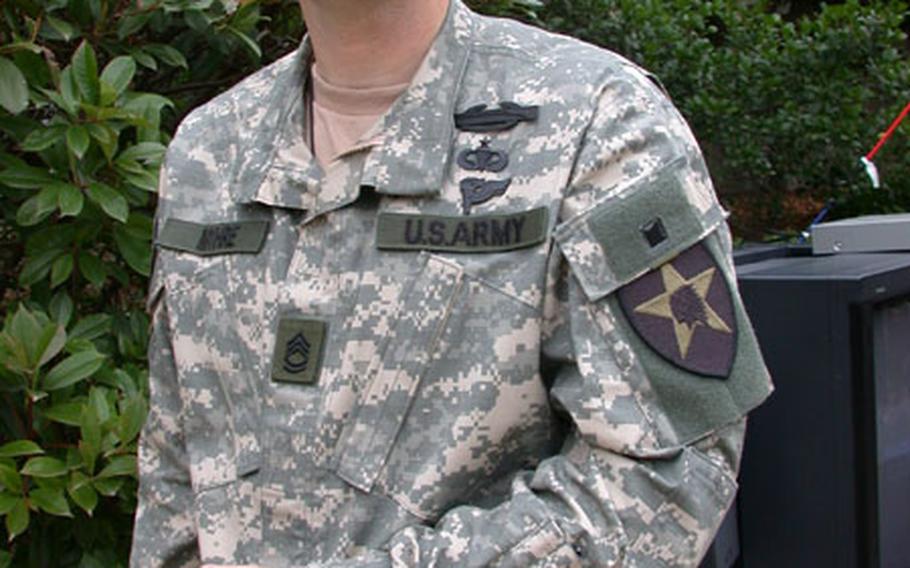 The top half of the new Army BDUs has a zipper rather than buttons. Note the changed placement of the rank, which will move from over the nametape to the center front, and the pen-and-pencil pockets on the right-hand sleeve, located on the forearm of the left sleeve. (Lisa Burgess / S&S) Underneath the right shoulder Velcro is a patch that can be pulled out to cover the “glint tape” on the front side, for times when soldiers don’t want to be seen at all under night vision. (Lisa Burgess / S&S) 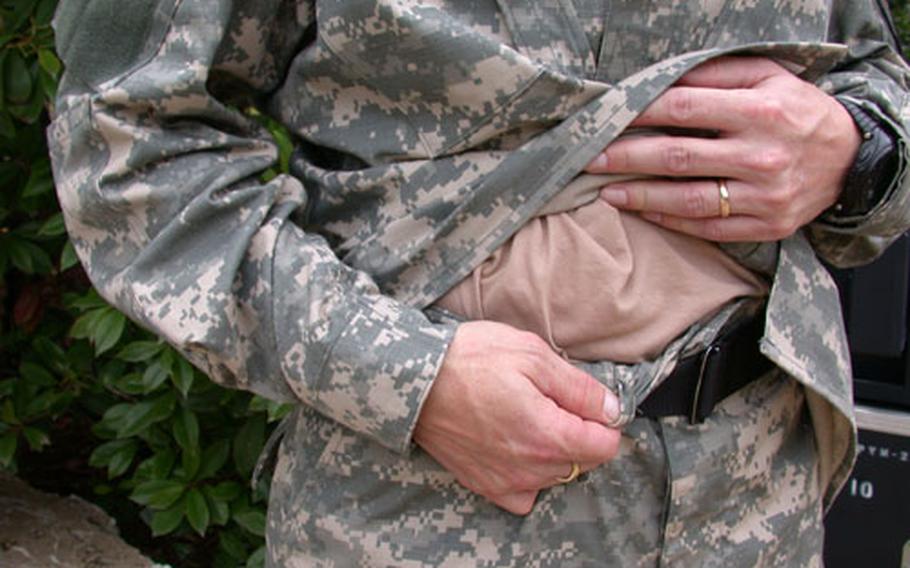 The waistband of the new BDU trouser is secured with an inside drawstring, instead of metal buckles. (Lisa Burgess / S&S)

(Click here for a graphic showing details of the new uniform.)

ARLINGTON, Va. &#8212; The Army rolled out its new battle dress uniform Monday at the Pentagon, revealing an outfit with a familiar silhouette but a significantly different color and pattern.

The new uniform &#8212; the Army&#8217;s first major changes to its BDU since 1981 &#8212; is based on a computer-generated, three-color digital camouflage pattern printed on a wash-and-wear, rip-stop cotton-and-polyester blend fabric.

The uniform will be made only in summer weight fabric, which soldiers have said they prefer to the heavy winter-weight fabric that is now an option, said Sgt. 1st Class Jeff Myhre, PEO Soldier&#8217;s noncommissioned officer for clothing and individual equipment.

The new BDUs have been wear-tested by 5,000 soldiers from the Army&#8217;s Fort Lewis, Wash.-based 3rd Brigade, 2nd Infantry Division.

The unit, also known as the Stryker Brigade, is now in Iraq, where its soldiers are wearing the uniforms in test-only desert colors that are slightly different from those that Army leaders chose for the final version, Norwood said.

The design of the new uniform is subtly different, designed for soldiers who tend today to be &#8220;bigger and more muscular,&#8221; especially in the chest, Myhre said.

Many of the features are intended to provide maximum comfort and efficiency while a soldier is wearing the Army&#8217;s new Interceptor body armor, Myhre said.

The uniform also includes a sewn-on anti-fratricide identifier patch made of a special material, which troops call as &#8220;glint tape,&#8221; because it glimmers under night-vision goggles and lets other U.S. servicemembers know that a soldier is a friend, not a foe.

At least one change in the uniform was made for morale reasons: the elimination of officers&#8217; branch identifier on the collar.

Army leaders decided to eliminate the branch identifiers that show an officer&#8217;s specialty, such as military intelligence or armor, because some soldiers consider some branches more prestigious than others, said Sgt. Maj. Martinez Alexander, PEO Soldier&#8217;s sergeant major.

The exact sequence of units that will get the BDUs has yet to be decided, Moran said.

New recruits should start getting the uniforms in October 2005, and the BDUs, which will cost about $88 each, should be available for purchase at Clothing Sales beginning in April 2006, Moran said.

By 2007, everyone in the Army should be wearing the BDUs, he said.

The Army is the third service to recently modify its combat garb.

The Marines were first to introduce new cammies in January 2001. The Marines&#8217; digi-cammies also are based on a computerized digital printout of pixels, which testers say blends better into the environment than the traditional large splotches.

Next came the Air Force, which began a six-month wear test of its new blue, gray and green tiger pattern BDU uniform in February.

The Navy is now considering changes to its uniforms that might include an all-rank &#8220;Navy battle dress&#8221; uniform for wear aboard ships and in other operational environments, as well replacements for the summer whites and winter working blues that are worn in offices by E-6s and below, said Cmdr. John Kirby, a Navy spokesman.