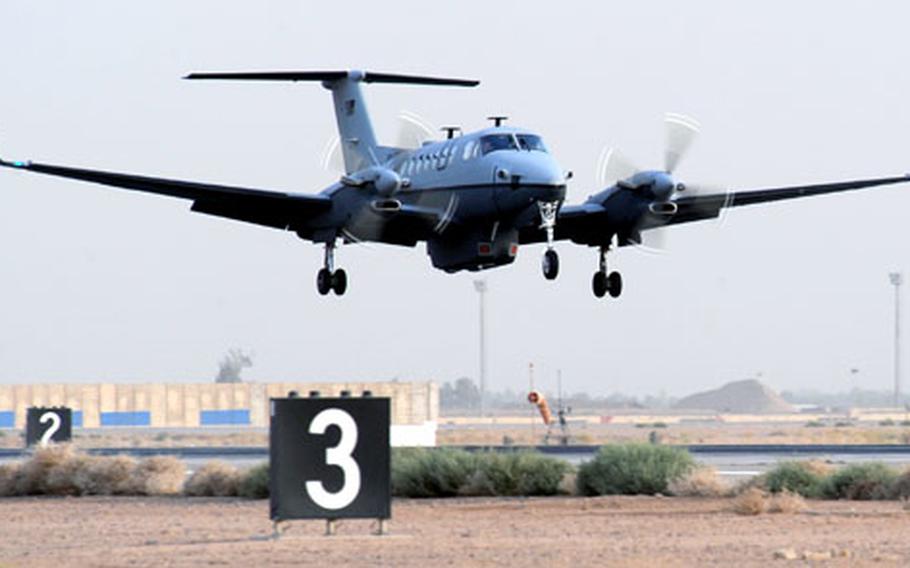 The MC-12 Liberty completes its first combat mission and lands at Balad Air Base. (Tiffany Trojca / US Air Force)

The MC-12 Liberty is a turboprop aircraft with a specialized four-person crew that provides full-motion video and signals intelligence. Essentially, it is a manned, souped-up version of the unmanned aerial vehicles (UAVs) that roam the skies above Iraq and Afghanistan.

The Liberty is "the first of its kind," Air Force Lt. Gen. Gary North, commander of 9th Air Force and U.S. Air Forces Central, said in an Air Force news release. "What our Air Force teams at our various headquarters staffs have done with the program has been nothing short of miraculous. They&#8217;ve satisfied very ambitious objectives and done it alongside our industry partners to achieve combat-urgent requests in a superb fashion, from initial contracts to combat sorties inside eight months."

The first Liberty aircraft arrived in Iraq on June 8, making its debut combat mission later that day, officials said. The aircraft will be assigned to the 362nd Expeditionary Reconnaissance Squadron while in Iraq.

"The MC-12 is an embodiment of the Air Force&#8217;s commitment to Coalition ground forces," Lt. Col. Phillip Stewart, 362nd ERS commander, said in the statement. "Our focus is to provide dedicated, responsive [intelligence, surveillance and reconnaissance] operations, and we&#8217;re ready to go."

The Liberty is one result of an effort ordered in April 2008 by Defense Secretary Robert Gates for the Air Force to better support troops on the ground.