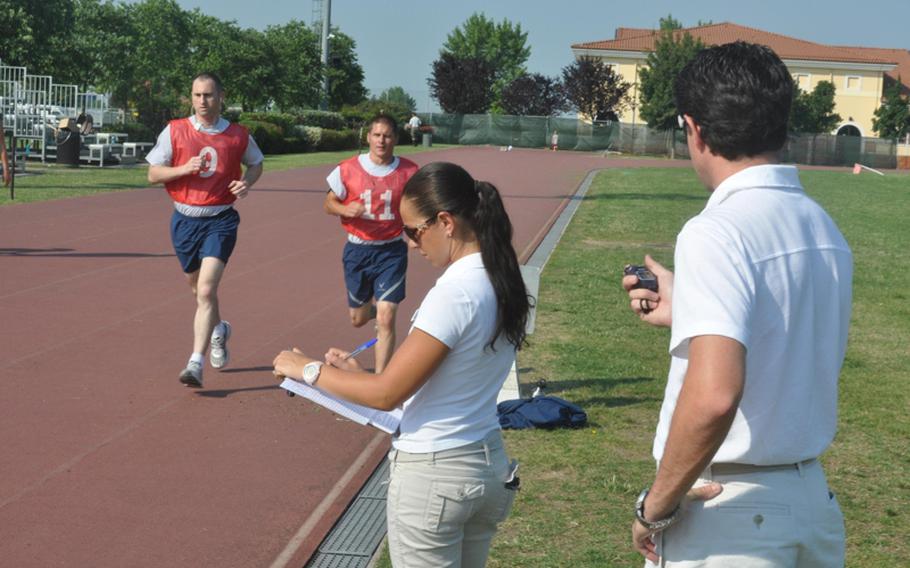 Eleonora Paronuzzi and Luca Rustja keep tabs on Tech. Sgt. Jeremy Tucker, left, and Airman 1st Class Brandon Detter as they run around the track at Aviano Air Base in Italy during the first day of the Air Force's new fitness test. (Kent Harris/Stars and Stripes)

But Tech. Sgt. Jeremy Tucker, who was taking the new test on the first day that it counted, said those who want to pass have been gearing up for months.

&ldquo;There was really no reason you couldn&rsquo;t prepare for this,&rdquo; said Tucker, dripping with sweat after completing his test in the 82-degree heat Thursday morning. &ldquo;Everyone knew it was coming. I busted my butt to get ready for this.&rdquo;

Tucker said he took a practice test several months ago and scored a 73 &mdash; two points less than passing. So he trained harder and felt confident of a passing mark Thursday.

&ldquo;I think we probably both got more than 90 percent,&rdquo; he said, glancing toward Airman 1st Class Brandon Detter standing nearby.

If that&rsquo;s true, then both airmen won&rsquo;t have to take the test for another year. In a reversal, the service announced in June that those scoring at least 90 (of a possible 100) won&rsquo;t have to take the tests twice each year as previously announced. Officials said the change would serve as an incentive for airmen to improve scores, reward those who are fit and help reduce the workload for the new Fitness Assessment Cells.

Those cells are composed of civilians at all but the smallest bases. Officials have said that having civilians in charge should make testing more uniform and rigorous. At Aviano, the Italian civilian testers disallowed push-ups and sit-ups they felt weren&rsquo;t done properly during a testing session Thursday.

&ldquo;It was a little bit more difficult,&rdquo; Detter said, adding that he had adjusted the way he did push-ups after taking a practice test weeks ago.

&ldquo;It&rsquo;s a good change, I think,&rdquo; he said. &ldquo;Even though I did a lot better on the old [test].&rdquo;

Airmen need to achieve passing marks in all four categories: an abdominal measurement, sit-ups and push-ups measured in a minute and a 1.5-mile run. Thresholds vary by age and gender and are generally tougher than previous standards.

If airmen pass three categories, but not a fourth, they fail &mdash; no matter how well they do on the others. Commanders have been given more discretion to force those who fail out of the service or have them attend programs designed to improve performance.

The service said in May that almost a third of airmen were failing in practice testing.