New Air Force field uniform will be available in January 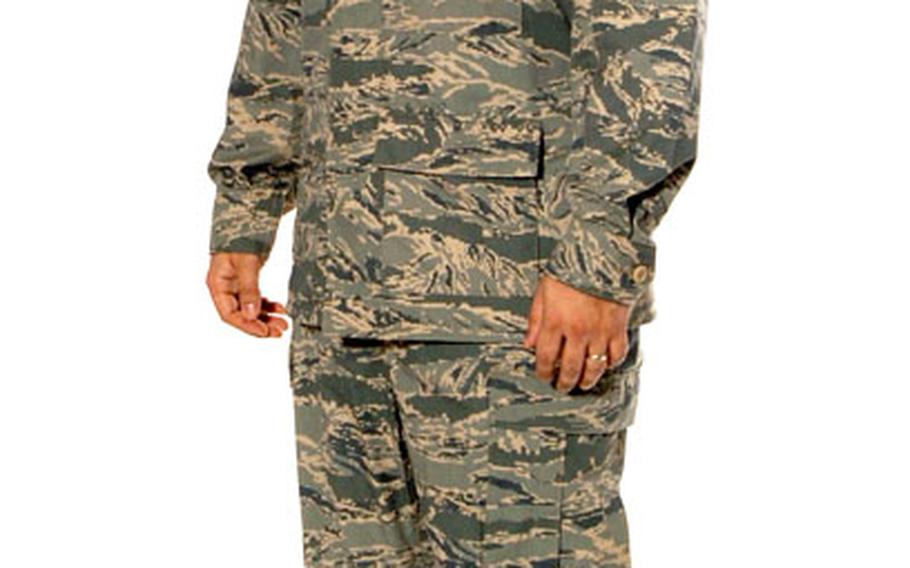 ARLINGTON, Va. &#8212; The Air Force&#8217;s new field uniform is ready for production and will begin appearing in military clothing sales stores in January 2007.

Officials are working on distribution, Air Force spokesman Capt. David Small said Monday, &#8220;so we don&#8217;t know where exactly&#8221; the uniforms will show up first.

But airmen have time. Air Force officials have decided to make fiscal 2011, which begins Oct. 1, 2010, the mandatory wear date.

The Airman Battle Uniform, or &#8220;ABU,&#8221; will replace the olive drab or desert-tan battle dress uniform that the Air Force shares with the Army (except for flight crews and pilots, who wear green jumpsuits).

In the summer of 2004, then-Air Force Chief of Staff Gen. John Jumper announced his intention of introducing a &#8220;distinctive&#8221; camouflage, or utility, uniform. The first prototype went through a wear test by more than 700 airmen at 32 bases worldwide.

The Air Force also opened a Web site for service personnel to comment. The new clothing&#8217;s wash-and-wear properties, expanded sizes and new design features got rave reviews, but the flashy tiger-stripe pattern in bright blue, green and black got a decided thumbs-down.

In response, the Air Force Uniform Board kept the popular features but substituted a subdued pattern in muted tan, gray, green and blue.

The new T-shirt is tan, instead of the black ones worn today. Airmen will be required to own one tan T-shirt with an Air Force logo on the front and &#8220;Air Force&#8221; on the back.

The manufacturing contract won&#8217;t be awarded until late summer, so the uniform costs aren&#8217;t known yet, Small said.

However, &#8220;we expect it to be just a few dollars more&#8221; than the old-style Army uniform currently costs, Small said.

&#182; Pockets: The shirt has four pockets on the front, with smaller pockets sewn on the inside of the breast pockets, and a small pencil pocket on the left forearm. The pants have side pockets with smaller sewn-in pockets inside to hold small tools, a cell phone or other gear, and two pockets on the lower legs.

&#182; Wash-and-wear: The uniform fabric is 50-50 nylon-cotton blend permanent-press, eliminating the need for separate summer and winter versions. No dry-cleaning, starching or ironing is required.

There is still one outstanding question regarding the new uniform: whether unit patches will be worn, and if so, where they will be positioned. That determination will be made soon, the Air Force News story said.