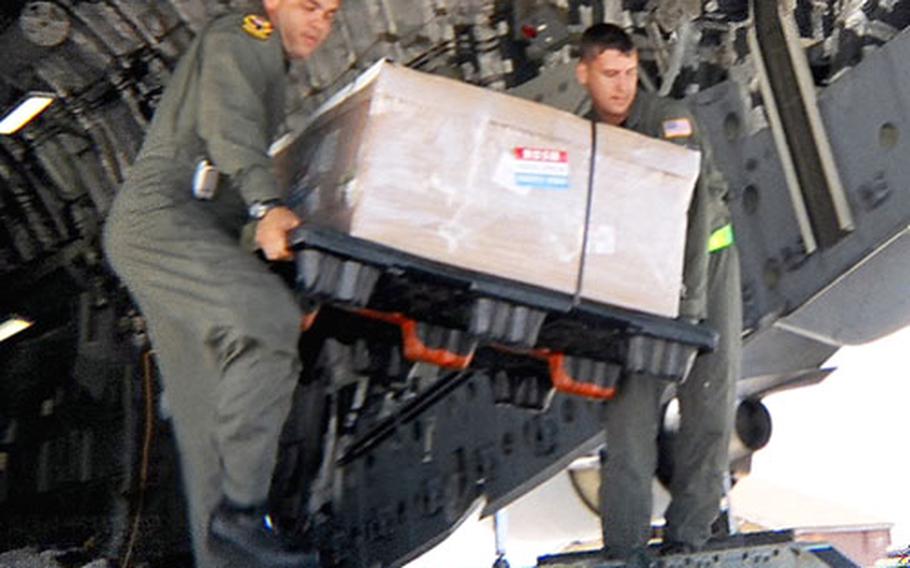 Two airmen finish unloading emergency medical supplies in Majuro, Marshall Islands, after a fire destroyed parts of the city’s only hospital. The Pacific Air Forces’ Kenney Headquarters airlifted the materials within hours of hearing of the need. (Courtesy of U.S. Air Force)

Although it won&#8217;t officially be activated until next month, a new Air Force command set up to respond to immediate crises completed its first real-world mission over the weekend, bringing two pallets of medicine to a fire-ravaged hospital in the Marshall Islands.

Within hours of hearing about the fire &#8212; at the republic&#8217;s main hospital and the only one in the capital, Majuro &#8212; a crew assembled the supplies, and a C-17 on Saturday rushed them to the island, where warehouses used to store medicines lay in ashes, said Capt. Yvonne Levardi, spokeswomen for the newly created Kenney Warfighting Headquarters at Hickam Air Force Base, Hawaii.

&#8220;This mission demonstrated the fact that the Air Force can get to places immediately to help people in emergency situations,&#8221; Lt. Col. Chris Davis, 535th Airlift Squadron commander, said in a written statement. &#8220;It&#8217;s fulfilling to us whenever we can move cargo and equipment and see the end results.&#8221;

Hours after the fire erupted and left the hospital with less than a day&#8217;s medical supplies, members of the 535th, with Hawaii National Guardsmen and the 15th Airlift Wing, worked with hospital staff to determine what supplies were needed. The crew collected the supplies from Tripler Army Medical Center in Honolulu and loaded them into a C-17, Levardi said.

The mission was unique for two reasons, she said: It was the first real-world mission for the new headquarters and it combined the resources of several different units.

The Kenney headquarters, created earlier this year, won&#8217;t be activated officially until October. The headquarters and nine others like it were established under an Air Force transformation plan to convert major units often responsible for operations in a specific geographic region into streamlined air and space networks to support combat commanders around the world.

Air Force officials say the change allows more efficient planning and execution of Air Force missions &#8212; dealing with a humanitarian crisis, for instance, such as the hospital fire.

Saturday&#8217;s flight carried with it Greta Morris, U.S. ambassador to the Republic of Marshall Islands. She was in Hawaii en route back to the islands from Washington, D.C., where she&#8217;d been discussing U.S. support to the republic, according to an Air Force news release.

Majuro remained in a state of emergency Wednesday, according to news reports. The hospital is one of two in the Marshall Islands. Government officials said about three months of medicine and pharmaceuticals were destroyed in the fire.

The Marshall Islands is a republic of almost 60,000 people spread across a string of small islands and atolls. Among them are Kwajalein atoll, home to a U.S. missile test range, and Bikini and Enewetak islands, both former U.S. nuclear test sites.

The country&#8217;s other hospital is on Kwajalein.