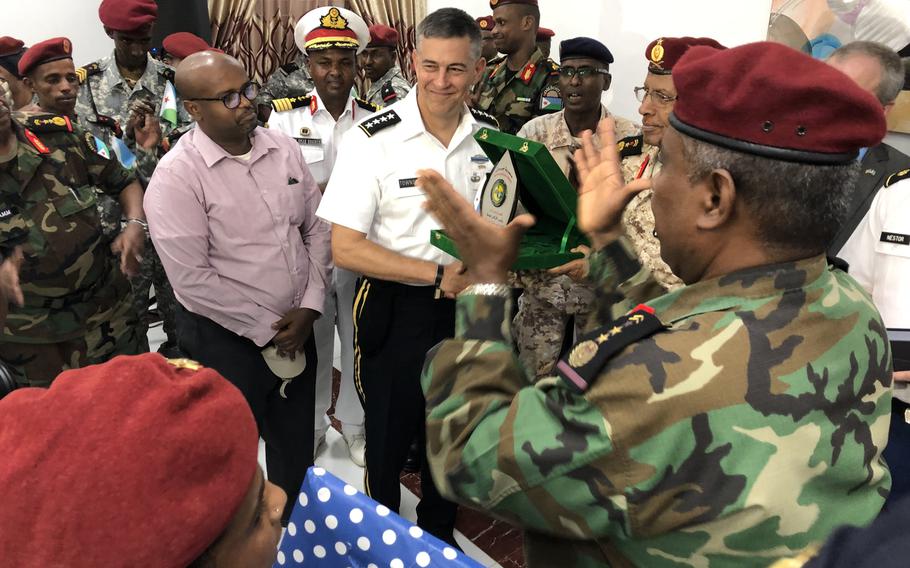 STUTTGART, Germany — U.S. Africa Command’s Gen. Stephen Townsend met with American troops in Niger on Thursday during a visit to assess security in the West Africa region, which is grappling to counter several Islamic militant groups.

Townsend’s visit to Niger, his first since he took over as head of AFRICOM in July, came in the midst of a 90-day review ordered by Defense Secretary Mark Esper into whether the U.S. should hold force levels on the African continent steady or make additional cuts.

U.S. troops are training with their Nigerien counterparts in a country that has proven dangerous but remains central to the military’s strategy in the region.

“Niger has been a willing and engaged partner in the fight against violent extremist organizations,” Townsend said. “Niger is committed to building its defense capacity and containing and degrading terrorist networks in Africa.”

An ambush in which militants killed four U.S. soldiers in October 2017 brought intense scrutiny to operations in the country and raised questions about the purpose of the American mission. While the U.S. has scaled back some of its operations and shifted more of its focus to higher level unit training rather than joint combat patrols in Niger, there are still risks. In June, American troops escaped serious injury when the U.S. military vehicle they were traveling in hit a roadside bomb.

Despite the dangers, the U.S. appears committed to keeping forces in Niger for the long haul.

In August, the U.S. Air Force began flying surveillance aircraft out of a new base in central Niger that has been years in the making. Known as Nigerien Air Base 201 in Agadez, the site is expected to improve intelligence gathering in the region.

AFRICOM has said operations there will expand over time.

“Nigerien Air Base 201 will ultimately possess an ability to support an array of aircraft and missions to include added ISR options,” AFRICOM said in a statement, referring to intelligence, surveillance and reconnaissance operations. The capabilities that the base eventually will have “will benefit the entire region,” Townsend said.

Townsend’s visit, which included meetings with senior Nigerien defense officials and the country’s president, Mahamadou Issoufou, was part of a tour through the region. Earlier in the week, he held talks with officials in neighboring Mali and Burkina Faso.

ISIS-West Africa has also become a top security concern for AFRICOM since it broke away from Boko Haram three years ago. That group routinely launches cross-border attacks in Niger.

While extremist groups in West Africa don’t pose a direct threat to the U.S. homeland now, military officials worry they could, if left unchecked.

“Our goal is to enable Niger’s defense and security forces to develop and sustain a professional force and contribute to peacekeeping efforts,” Whitaker said.