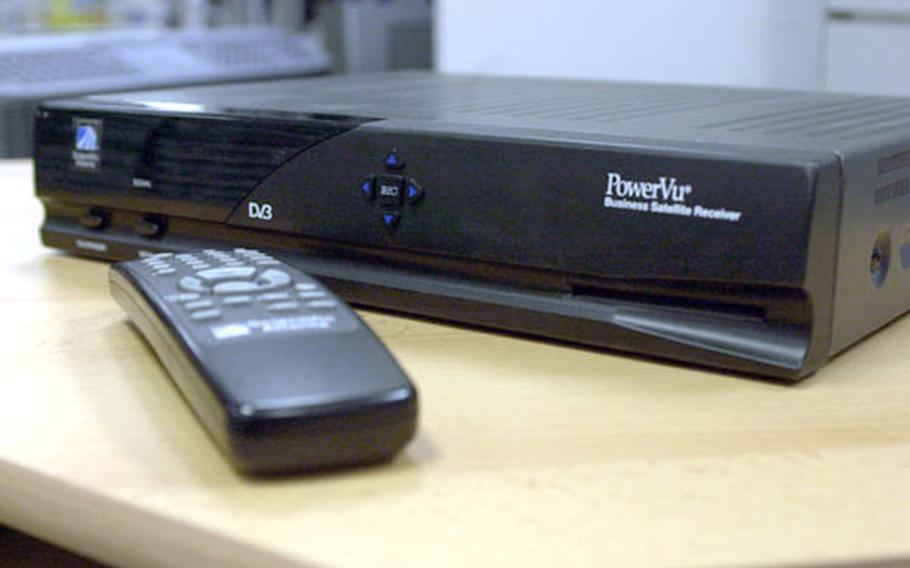 A Scientific Atlanta-made decoder that allows eligible Americans to receive American Forces Network programming costs up to $565 new. A cheaper model may be available in three months to AFN customers. (Scott Schonauer / S&S)

KAISERSLAUTERN, Germany &#8212; A new American Forces Network satellite decoder is on its way to military exchanges for about half the price.

Decoder maker Scientific Atlanta has designed a cheaper model that provides all of the same features and programming as the original version, said Andy Friedrich, deputy director for the American Forces Radio and Television Service headquarters in Washington.

The current models available in military exchanges sell for between $535 and $565 each at overseas bases.

The newer model will be on the shelves at Army and Air Force Exchange Service retail stores within three months, said Judd Anstey, an AAFES spokesman in Dallas.

Friedrich said the decoder costs $239 each if the government buys it at the bulk rate. But Anstey said the retail price has not been determined because AAFES is in negotiations with the manufacturer.

The Navy Exchange Command, which also is looking into selling the newer decoders, is awaiting &#8220;set-up information&#8221; from the supplier before it begins offering the new model, spokeswoman Kristine Sturkie wrote to Stars and Stripes.

Military exchanges sell the decoders for between 6 percent and 7 percent above cost to pay for the price of shipping, storing and selling the units. Eligible Americans can lease the current decoders for $25 a month or buy the boxes for $535 at Army and Air Force exchanges or $565 at Navy stores.

AFN provides American TV shows, news and sports from the United States through free, over-the-air transmitters near bases across the globe. Americans who live out of the range of the broadcast must buy a satellite dish and receiver to pick up the programming. With a satellite hook up, viewers can get more than six channels of programming.

Active-duty servicemembers, Defense Department civilians, State Department workers and military retirees are the only people allowed to buy or rent the boxes.

Some regions should get the newer decoders soon.

Vin Godleski, an executive account manager for Scientific Atlanta, said that 10,000 of the decoders were bought by commands and shipped to the Pacific region and another 3,000 were sent to Vicenza, Italy. Americans will be able to borrow the decoders free of charge in those areas.

Scientific Atlanta approached exchange officials earlier this year with the new model. The company slashed the price of the decoder due to design changes and using more standard parts, Godleski said.

While Americans living overseas welcome a cheaper decoder, those who just bought decoders want a rebate.

Kari Sharpe, a Defense Department civilian, bought a new decoder about seven months ago for $535 and said exchanges should offer the old decoders for the same price as the new one.

Selina Torbert, whose husband is a sergeant in the Army, lives on base and doesn&#8217;t need a decoder, yet. Most base homes can get AFN programming through cable piped into their televisions.

Army and Air Force exchanges do not plan to lower the price of the approximately 1,700 old decoders still in stock before the new decoder is available. However, customers may take back the decoder for a full refund 90 days from the date of purchase with a receipt &#8212; standard policy for all returns, Anstey said.

NEX has about 200 old decoders in stock.

The arrival of a cheaper decoder could pose problems to those who bought the more expensive decoder and hoped to sell it when they moved back to the United States. Used decoders go for as much as $450 in base classified advertisements and in Stars and Stripes classifieds.

If exchanges begin selling a new decoder for half the price, people trying to sell their old decoders will probably have to lower their price.

Senior Master Sgt. Mark Booth, who works at U.S. Air Forces in Europe headquarters at Ramstein Air Base, paid $500 for his used decoder thinking he would get at least $300 back when he sold it. He was at the Vogelweh PowerZone last month to pick up his repaired decoder.