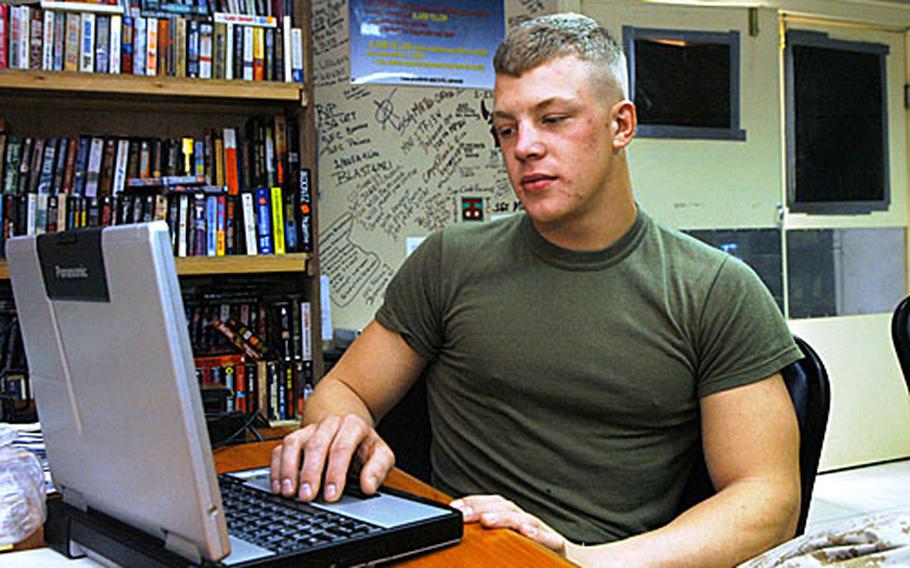 Pfc. Brian Klingenberg, 20, of Fraser, Mich. surfs the Internet while waiting in the Air Force Theater Hospital near Balad for his flight. Klingenberg was to get hernia surgery before rejoining his unit in Camp Fallujah, he said. (Allison Batdorff / S&S)

Pfc. Brian Klingenberg, 20, of Fraser, Mich. surfs the Internet while waiting in the Air Force Theater Hospital near Balad for his flight. Klingenberg was to get hernia surgery before rejoining his unit in Camp Fallujah, he said. (Allison Batdorff / S&S) 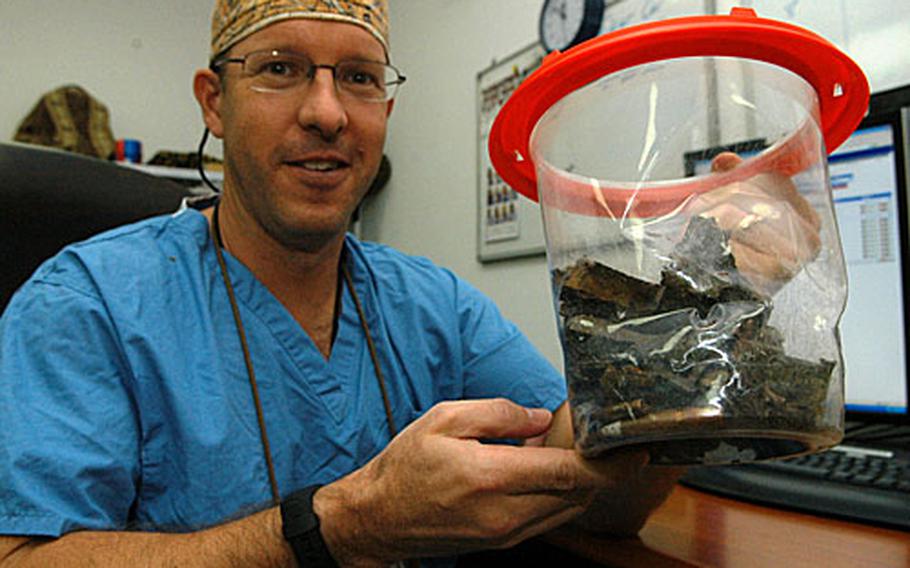 Orthopedic surgeon Lt. Col. Eric Nelson keeps all of the foreign objects he removes from soldiers – shrapnel, nails, unexploded rounds, and the occasional door hinge – in a bucket by his computer at the Air Force Theater Hospital in Balad. (Allison Batdorff / S&S)

BALAD, Iraq &#8212; Cool, temperature-regulated air sweeps down the white, well-lit hallway. It circulates past the CT scanner and in the spacious operating room where surgeons maneuver around a U.S. soldier who just came in with a gunshot wound.

This ballet of activity is a far cry from the dusty, dirty &#8220;M*A*S*H&#8221; days of two months ago, said Col. Patrick Storms, commander of the Air Force Theater Hospital at Logistics Support Area Anaconda.

The hospital moved from a series of 12-by-12-foot tents into a 63,105-square-foot modern structure two months ago. The new complex also includes a separate outpatient clinic and mental health center.

The steady stream of gunshot wounds and victims of mortar and roadside bombs also serve as reminders, Storms said.

The hospital has the most &#8220;through put&#8221; of any trauma hospital in Iraq, Storms said, because it&#8217;s at a major transportation hub. It&#8217;s also the destination for neurological injuries, as they have two neurosurgeons on staff.

About 500 helicopters land on the pad a month, with emergency care cases sometimes spiking to more than 1,100, depending on the month. September was one of the lowest yet, with 569 cases, Storms said.

Life at a trauma hospital means never knowing what&#8217;s coming in the door, Storms said. A big blast may put 14 people on the helipad at once. A mother was shot by her 3-year-old wielding an AK-47. They&#8217;ve even delivered a baby, Storms said.

The key is speed &#8212; to get people the help they need and out fast to free up the beds for the next bout of combat casualties. Patients go from the helipad to CT scan in six minutes. They may be in the operating room 20 minutes after they&#8217;ve landed. An unconscious patient may wake up at Walter Reed Army Medical Center in Washington, D.C., within 96 hours, Storms said.

The average stay for an American soldier is two days, Storms said. Iraqis &#8212; who make up half of the patients &#8212; stay four or five days, as the Iraqi health system is still wanting in some areas and &#8220;they need to be healthier&#8221; before release, Storms said. The survival rate is 98 percent for Americans and 96 percent for Iraqis who enter the hospital with a pulse, Storms said.

The new digs still have quirks, Storms said. They are still figuring out power glitches and equipment issues among the usual concerns &#8212; too few bathrooms and electrical plugs. In general, trauma surgeons are becoming harder to find due to attrition, fatigue and job opportunities in the U.S., Storms said.

Most of the Air Force members of the 380-person staff work on 120-day deployments, compared to the standard Army deployment of 15 months.