New ACUs get A-OK in Germany 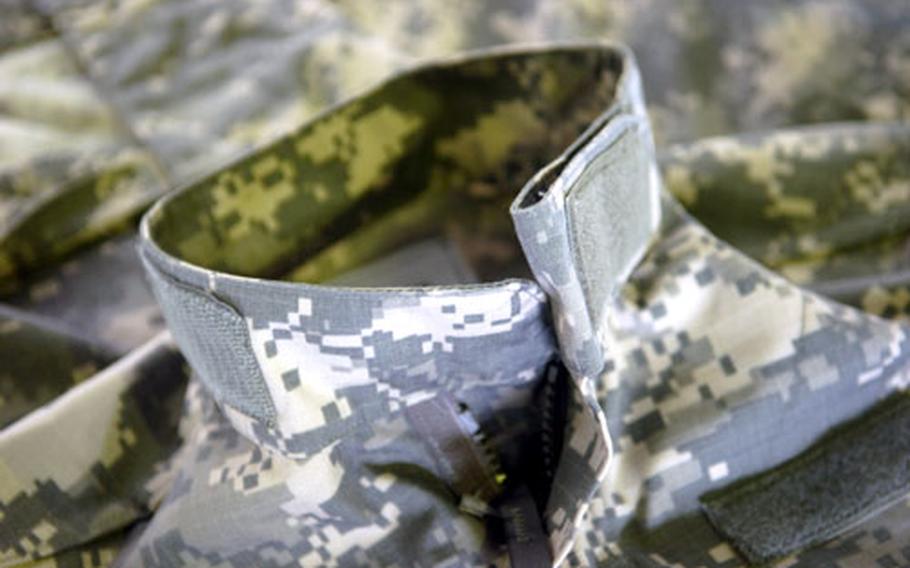 The new Army Combat Uniform feaures a Mandarin collar that is designed to be worn up or down. (Jessica Inigo / S&S)

The new Army Combat Uniform feaures a Mandarin collar that is designed to be worn up or down. (Jessica Inigo / S&S) 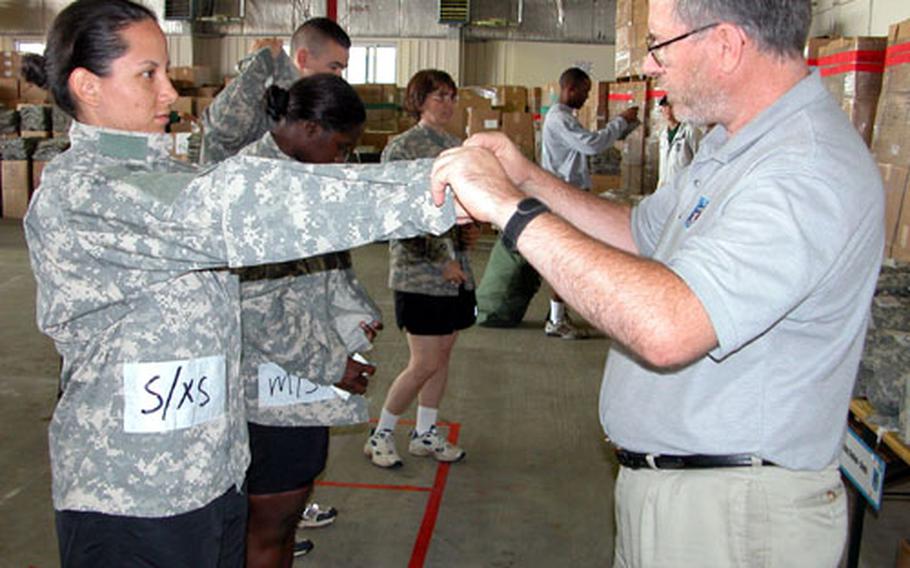 1st Lt. Marcela Hernandez, of the 266th Finance Command out of Schwetzingen, Germany, is fitted Wednesday into the new Army Combat Uniform by Tim Winckel during a final uniform issue in Darmstadt, Germany. Hernandez said the uniforms felt pretty comfortable, but she&#39;s going to have to wear them for a while to see how she feel about the new zipper and Velcro additions. (Jessica Inigo / S&S) 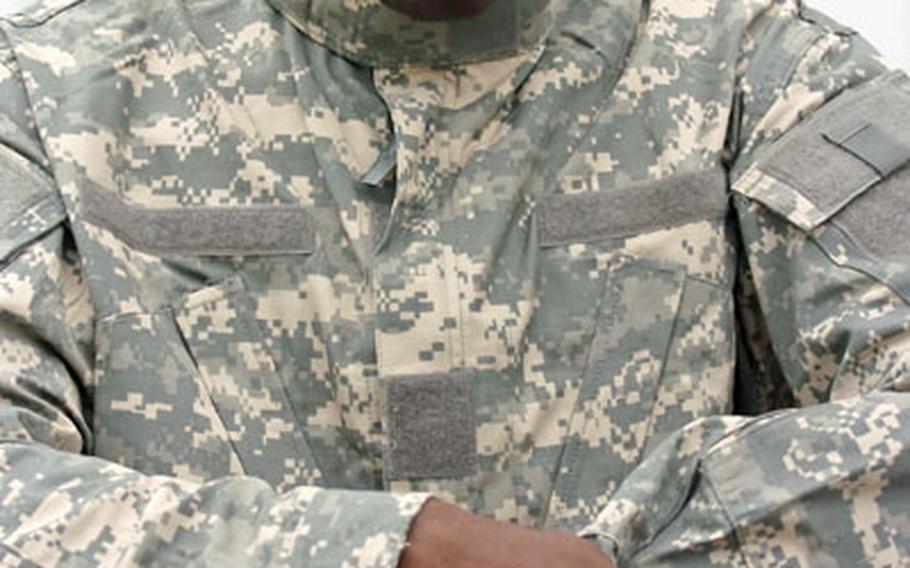 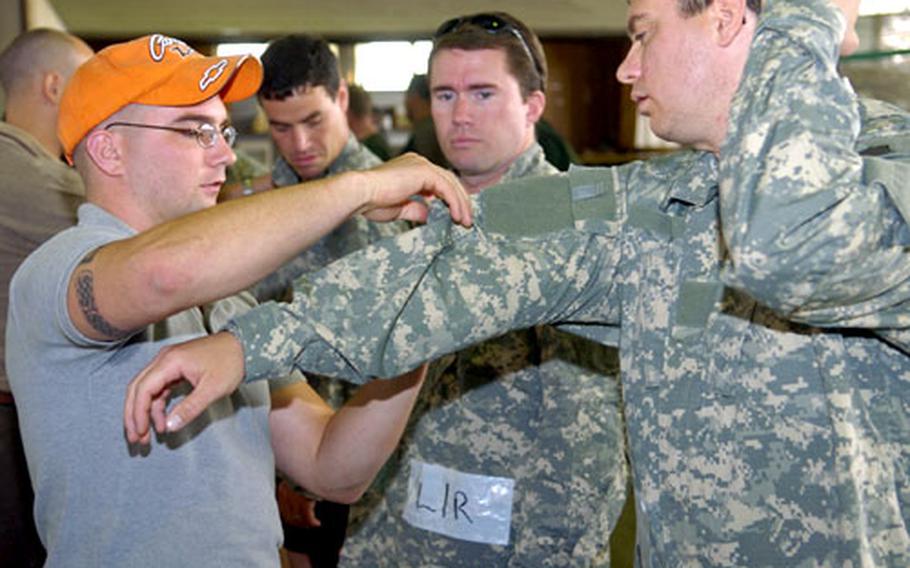 Paul Rivera was in line at Baumholder&#8217;s chow hall in Germany when he overheard soldiers talking about the new Army Combat Uniforms.

One of the best features, they said, is you can wash them, hang them up to dry, then slip them on. No more ironing. No more dry cleaning, like the old battle dress uniform required.

It was music to his ears.

Rivera and his team from the Fort Belvoir, Va.-based Program Executive Office Soldier is wrapping up a monthlong mission to outfit Germany-based soldiers who are slotted for deployment with the new, digitized, permanent-press combat uniform.

The PEO Soldier team set up uniform distribution points in Baumholder, Grafenw&#246;hr, Darmstadt and Hanau and have about another week left to distribute the new uniforms.

Rivera said the uniforms should be washed only in cold or warm water and then either dried on the permanent-press cycle or hung up to dry. Line-drying is best, he said.

For troops, this detail is a welcomed break. The money that will be saved on dry-cleaning bills is the first thing troops mention after they comment on the new digitized look.

&#8220;We&#8217;re not supposed to dry-clean these, so that $8.50 we spend every time we get our uniform starched is going to save us a lot of money. It adds up,&#8221; said Gordon, who has been in the military for two years and is getting ready to deploy with his unit soon.

Warfighters across the map have been receiving the ACUs, with the team coming directly to Germany from Alaska and headed next to Fort Hood, Texas.

The new uniforms have been field-tested to be better for warfighters, with many changes inspired by Special Forces modifications, according to Rivera.

&#8220;When they first see it, some soldiers are a little apprehensive,&#8221; Rivera said. But then, they find out it&#8217;s lighter and more comfortable than the other uniforms, he said.

In Darmstadt, a Special Forces unit received its new issue of the ACUs on Monday. The new uniform will replace the unit&#8217;s already-modified desert camouflage uniforms.

Though none of the Special Forces troops wanted to give their names, many did show signs of this apprehension Rivera was talking about.

He agreed that the wash-and-wear uniform concept was long overdue, but said there was one Army tradition that he&#8217;ll miss by wearing the new duds.

Other troops agreed they would miss their Kiwi polish, since no-shine desert boots are being issued with the ACUs.

First Lt. Marcela Hernandez of the 266th Finance Command said, &#8220;I actually liked shining my boots and being in a starched uniform. I like looking sharp.&#8221;

However, Hernandez did say the ACU was much more comfortable, though she would still have to get used to the zippered-up top and fabric fastener patches.

Rivera has in-stock uniforms ranging in size from extra small to double-extra large.

So far, very few soldiers have needed special-size-orders, which Rivera will send to Fort Belvoir. Then the uniforms will be shipped to the soldiers through Central Issue Facilities.

After one soldier received his new uniform Monday in Darmstadt, he tried on the top again, zipping it all the way up and flipping up the new Mandarin collar, which is supposed to offer added protection from the collar on the body armor.

The Army is currently handing out revamped combat uniforms to soldiers heading downrange. Modifications to the new uniform include:

&#182; All name tapes and unit insignia now attached with fabric fasteners, with badges only pinned on and worn in garrison.

&#182; Sleeve pouches for foam inserts, giving low-crawling soldiers an added layer of impact absorption under elbow pads. The pouches also are available on the trousers for kneepads.

&#182; Flip-up Mandarin collar to protect from chaffing on the neck caused by body armor.

&#182; Kneepad pockets are designed to allow water to drain quickly.

&#182; The bottom pockets on the blouse are gone, moving them down to the leg under the cargo pockets.

&#182; Blouses are cut shorter so there is less material to tuck in.

&#182; Each uniform has infrared tabs for night-vision goggle use, which can be covered when necessary.

&#182; A two-way zipper allows soldiers to open their tops from the bottom to cool off without taking the blouse off.

&#182; Fabric fastener pockets make for easy access, but safe enough to store items in without falling out.

&#182; Trouser waist pull strings have been replaced by a drawstring that doesn&#8217;t chafe like the old metal tabs did.

&#182; Side pockets on trousers have drawstrings to keep contents from spilling out.