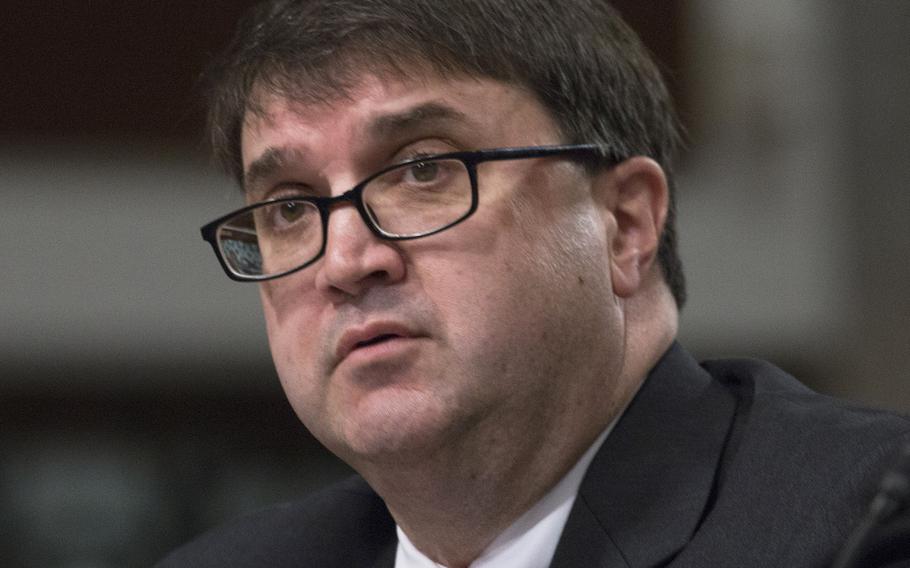 Robert Wilkie, at a Senate hearing in November, 2017. Wilkie will serve as acting secretary of the Department of Veterans Affairs in the wake of David Shulkin's firing on March 28, 2018. ( Joe Gromelski/Stars and Stripes)

In a three-minute video, Wilkie describes his “customer service” philosophy for the agency in an attempt to refocus employees. Wilkie, 55, is taking over during a period of unrest, after infighting between VA leaders led to the ouster of former VA Secretary David Shulkin.

In the video, Wilkie notes: “I do not know how long I will be privileged to serve as the acting secretary.”

Trump announced March 28 that Shulkin was no longer VA secretary and Rear Adm. Ronny Jackson, the White House physician, was the president’s nominee to take over as agency chief. Along with the announcement, Trump said Wilkie would serve as acting secretary until Jackson is confirmed by the Senate. Wilkie previously worked as undersecretary of personnel and readiness for the Defense Department.

That decision has come under scrutiny in recent days.

In tapping Wilkie, Trump bypassed VA Deputy Secretary Tom Bowman. Federal law gives a president broad authority to temporarily fill an agency job if the officeholder “dies, resigns, or is otherwise unable to perform the functions and duties of office.” The law doesn’t explicitly state whether it applies when someone is fired.

While the White House contends Shulkin resigned, Shulkin – outspoken since his dismissal – said he was fired and never submitted a resignation, nor was one requested.

On Tuesday, the large veterans organization AMVETS sent a letter to Trump, urging him to remove Wilkie from the job and allow Bowman to take over as VA chief. In addition to the legal questions, AMVETS was concerned Wilkie’s lack of experience with the VA would slow progress there.

After Wilkie’s video message Tuesday, AMVETS Executive Director Joe Chenelly said the group stood behind the letter that they sent to Trump. He also said he sent a note to Wilkie “letting him know our position is about veterans, not him.”

“We are glad he reached out to the VA’s 350,000 employees first thing,” Chenelly said. “Morale is not good right now, so it is important they know the acting secretary is thinking about them. I hope there are more substantive communications from Mr. Wilkie to his team very soon.”

In the video, Wilkie describes his military background. He’s the son of an Army artillery commander and he served as an officer in the Navy and Air Force before working as a senior leader at the Pentagon under former secretaries of defense Robert Gates and Donald Rumsfeld.

“Being with you today is the culmination of a lifetime of watching those who have borne the battle,” Wilkie said.