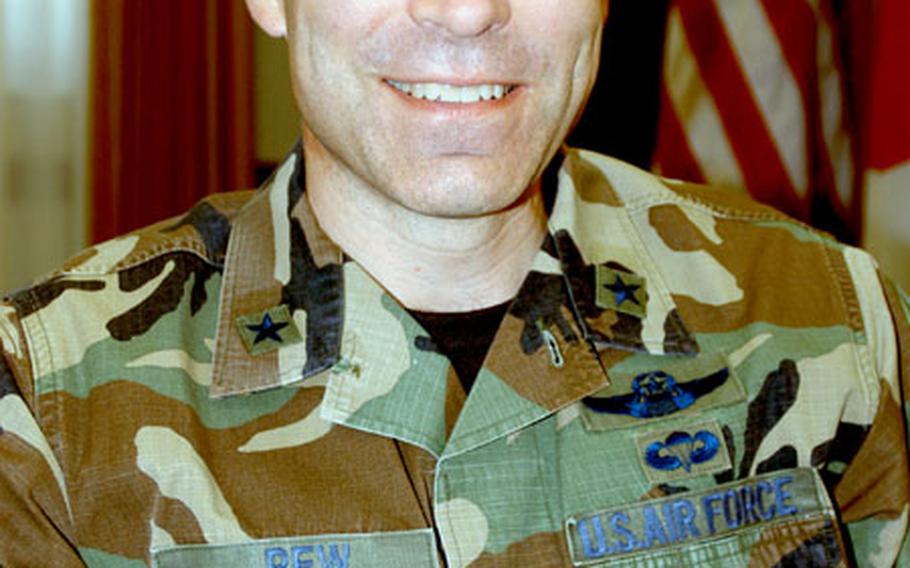 MISAWA AIR BASE, Japan &#8212; Less than two weeks before Brig. Gen. Bill Rew took command of the 35th Fighter Wing at Misawa in April, a 19-year-old sailor assigned to the base was involved in a fatal wreck that killed a Japanese national.

Then in May, a 19-year-old airman collided with a local driver, killing the woman. And it almost happened a third time in June, when a military member from Misawa seriously injured a local woman.

Rew had enough. He swiftly enacted tougher driving penalties, to include:

&#8226; Drivers caught speeding more than 30 kilometers per hour over the posted limit will lose driving privileges for three months.

&#8226; Motorists who receive moving violations, such as speeding tickets, must take a defensive driving course within seven days or fork over their licenses for at least one week or until they have completed the class.

At stake, besides the lives of Japanese and American citizens, is what base leaders call the best military-host nation relationship in Japan.

&#8220;What we do here in Misawa is too important to Japan, to the Pacific region, to have these driving incidents put that relationship in jeopardy,&#8221; he said.

Rew said the three crashes resulted from negligent driving, a combination of excessive speed and inattention.

Misawa Mayor Shigeyoshi Suzuki knows that &#8220;Americans sometimes have trouble adjusting to the Japanese driving conditions,&#8221; Rew said. &#8220;He asks us routinely to make sure our folks are driving slowly.

Rew, who joined the Air Force in 1975, came to Misawa from Shaw Air Force Base, S.C., where he served as director of operations, Headquarters 9th Air Force and U.S. Central Command Air Forces. This is his second assignment at Misawa. He&#8217;s 46 years old and considers Columbia, S.C., to be his hometown.

Though he was quick to implement some tough driving policies, Rew said he &#8220;didn&#8217;t come in with a mandate to fix anything. The wing was in great shape when Gen. [Dana] Atkins gave it to me and I want to keep it in great shape.&#8221;

The general&#8217;s focus, as wing and installation commander, is twofold, he said: To ensure that the wing is able to execute its mission and that Misawa Air Base continues to be a fine place to live, work and play.

Rew said he wants the &#8220;Wild Weasels&#8221; of the 35th Fighter Wing to be the best in the Air Force at their primary mission of destroying surface-to-air missile sites.

But the commander said he&#8217;s also committed to ensuring all of Misawa&#8217;s airmen, from civil engineers to police, are trained to perform their combat mission at home and abroad.

The global war on terrorism has changed the scope of some of those missions, Rew said. &#8220;We have airmen doing things now that they weren&#8217;t doing two years ago in the desert.&#8221;

For example, a few years ago the Air Force&#8217;s security forces focused on the defense of bases inside the perimeter, Rew said. &#8220;But as we went into Iraq and Afghanistan, and we&#8217;re working on bases where airmen are living with soldiers in a joint environment, the airmen and soldiers are doing more of the security operations outside the wire.&#8221;

Rew recently authorized using wing funds to help buy a training tool to help Misawa&#8217;s security forces prepare for this new expeditionary role. They&#8217;ll shoot modified &#8220;bullets&#8221; with paint &#8212; not a real bullet but not a paint ball, either; they&#8217;ll feel the rounds hit them, Rew said. It will allow them to train more realistically for convoy escorts, joint patrols and other deployment situations.

Misawa airmen also will be put to the test in exercises with more real-world combat scenarios, Rew said, noting the base&#8217;s next Operational Readiness Exercise is scheduled this fall. The commander said he&#8217;ll have a hand in drawing up the scenarios, some of which will be based on his experience in the desert.

Airmen shouldn&#8217;t expect more exercises during his tenure, but the focus of such training will change some, he said.

&#8220;I&#8217;ve been in the Air Force long enough to know that some years the budget is very strong and others, money goes other places, all in the Defense Department. This particular year is a little challenging for us but we&#8217;re still able to train and operate.&#8221;