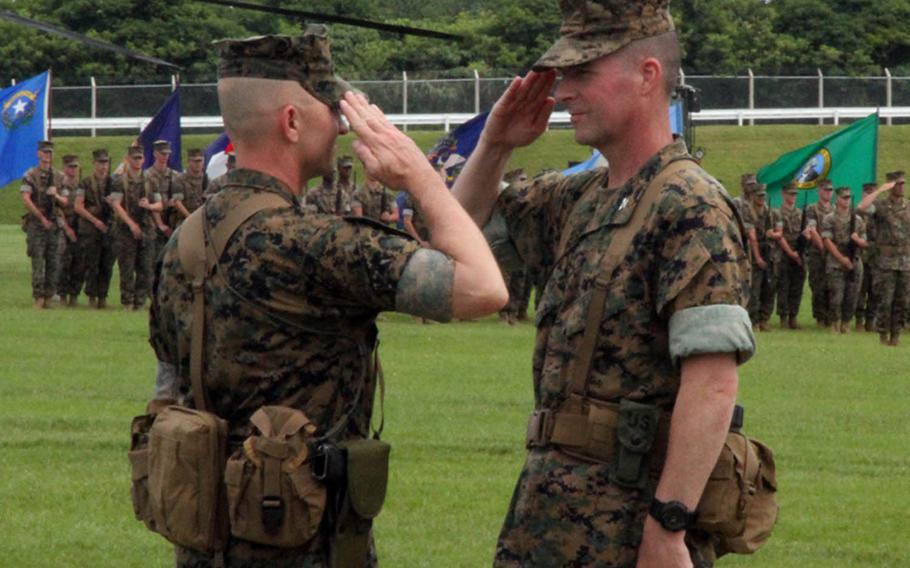 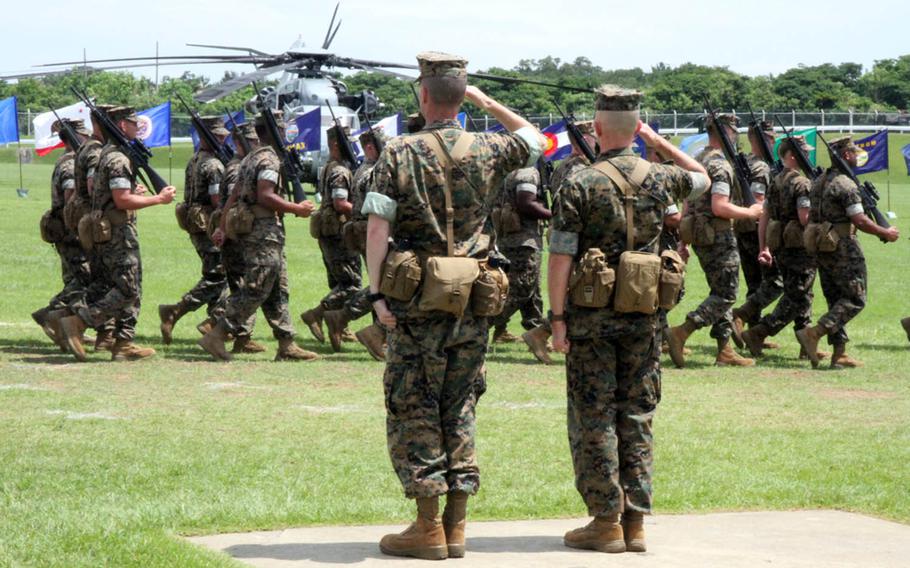 Brodie, who comes to Okinawa from a joint assignment with the 1st Air Force, 601st Air Operations Center as its combat plans division chief, vowed to continue Wallace’s work.

That legacy includes an unprecedented level of integration with U.S. naval forces in the region, the first operational deployment of the F-35B stealth fighter and development and implementation of the “up-gunned expeditionary strike group,” which attaches cruisers, destroyers or frigates to the traditional three-ship strike-group template.

Wallace also shepherded the 31st MEU through trying times, after an MV-22 Osprey crashed into the sea off the Australian coast on Aug. 5, killing three Marines.

“I have exceptionally big footsteps to follow in,” Brodie told the crowd. He then vowed on behalf of the 31st MEU to provide regional stability, prosperity and peace in the Asia-Pacific.

“I know you’re up for the task,” he told the Marines on the parade deck before him. “It’s truly an honor to stand in front of you as your commander.”

Nicholson then took to the microphone and said it was a “very unusual day” at Camp Hansen.

“I’m not sure what’s going on here, you know, our president just concluded a meeting with North Korea,” he said. “Six months ago, they were slinging missiles over Hokkaido ... I don’t know what’s going on in the world here, but things are changing. But one thing that doesn’t change is the readiness of this MEU.”

Nicholson lauded Wallace for his many accomplishments during what essentially became a transitional period for the MEU and the Marine Corps in general, as the service took dramatic steps toward modernization and increasing its lethality.

Wallace served on four deployments with the 31st MEU since taking command in May 2016.

“Tye, I couldn’t be prouder of what you’ve done,” Nicholson said. “You’ve made incredible contributions to the readiness of our team here.”

Wallace praised the approximately 10,000 Marines who had spent 10 out of 24 months at sea with him over the past two years and traveled to Vietnam, Korea, Australia, the Philippines, and traversed the South China Sea, or supported those operations.

“They’ve been everywhere; they’ve done everything I’ve asked them to do and they’ve done it magnificently,” he said. “I couldn’t be more proud of them. They’re fantastic young men and women, and they’re America’s best.”

Brodie graduated from The Citadel in 1994 and was commissioned as a second lieutenant. He later became an F/A-18 Hornet pilot and participated in Operation Southern Watch, Iraqi Freedom and Enduring Freedom and graduated from the Naval Fighter Weapons School, known as “TOPGUN.”

Brodie served on the ground in Iraq as a forward air controller for special operations units and has battled the Islamic State in Operation Inherent Resolve. He received his first command assignment in 2011.