New 12th CAB to rehearse at Hohenfels for mission in Iraq 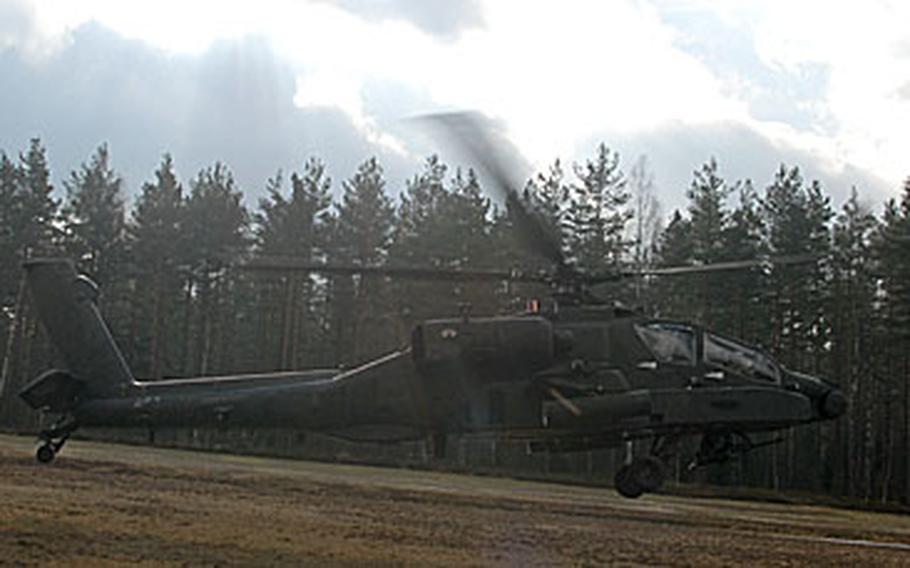 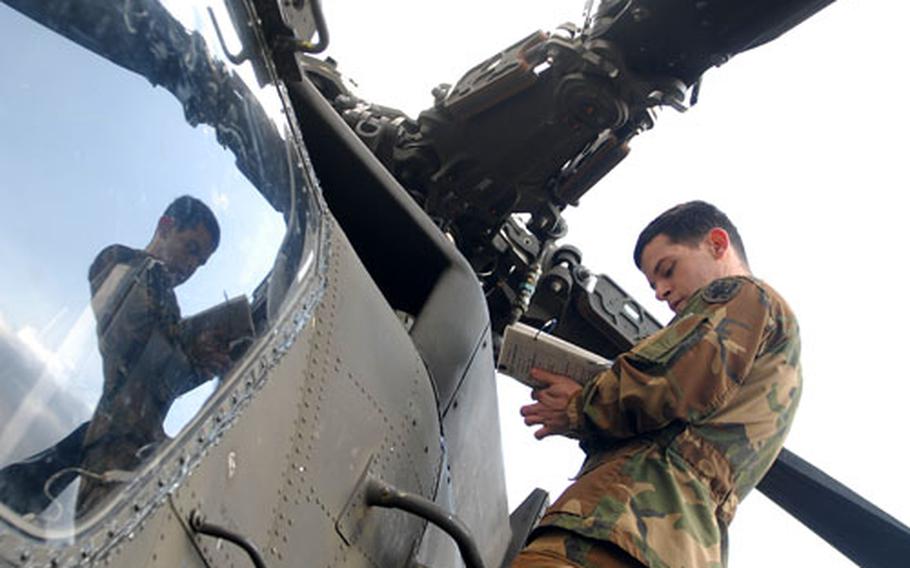 GRAFENW&#214;HR, Germany &#8212; The recently formed 12th Combat Aviation Brigade will begin a mission-rehearsal exercise at Hohenfels&#8217; Joint Multinational Readiness Center next week to prepare its soldiers for deployment to Iraq.

The brigade, which activated in August and includes Apache attack helicopters and Black Hawk and Chinook transports, was told about the Iraq mission in January.

The dates of the deployment have not been announced, although a farewell ceremony for the 12th CAB is scheduled tentatively for May 16 in Katterbach, Maj. Charles Bowery, the brigade&#8217;s executive officer, said last month.

The 12th CAB already has established its headquarters at Hohenfels and other units are practicing gunnery at Grafenw&#246;hr&#8217;s Joint Multinational Training Command.

On Thursday, rotors whirled, sending grass and small branches flying through the forest at Grafenw&#246;hr as soldiers from 2nd Battalion, 159th Aviation Regiment prepared for a blank-fire exercise over the training area.

Capt. Anthony Bonarti, 30, a 2-159 Apache pilot from Cortland, N.Y., said the exercise, known as Apache Table XII, involves three teams, each composed of four helicopters along with two command-and-control helicopters. Its goal is to get the teams working together to complete the mission, he said.

One skill that the 12th CAB pilots won&#8217;t train in is hovering. Instead, the helicopter crews practice firing on the run, Bonarti said.

Not only is the tactic a good way to counter the threat of insurgents, whose attacks on U.S. aviation in Iraq have had some success in recent weeks, it is a necessary part of flying in Iraq&#8217;s challenging conditions in which helicopters are weighed down by combat equipment and heat and dust stress equipment to its limit, he said.

Maintenance crews from the 12th CAB also are expecting a challenging environment in Iraq.

Spc. Wesly Suranyi, 22, a 2-159 Apache crew chief from Buffalo, N.Y., said the Iraq mission will be his first time in a combat zone.

The 33-year-old San Antonio native, who works as a supply sergeant with Company C, said some units within 12th CAB deployed downrange before transformation but that Iraq will be the first overseas mission for the brigade as a whole.