Never too young to play 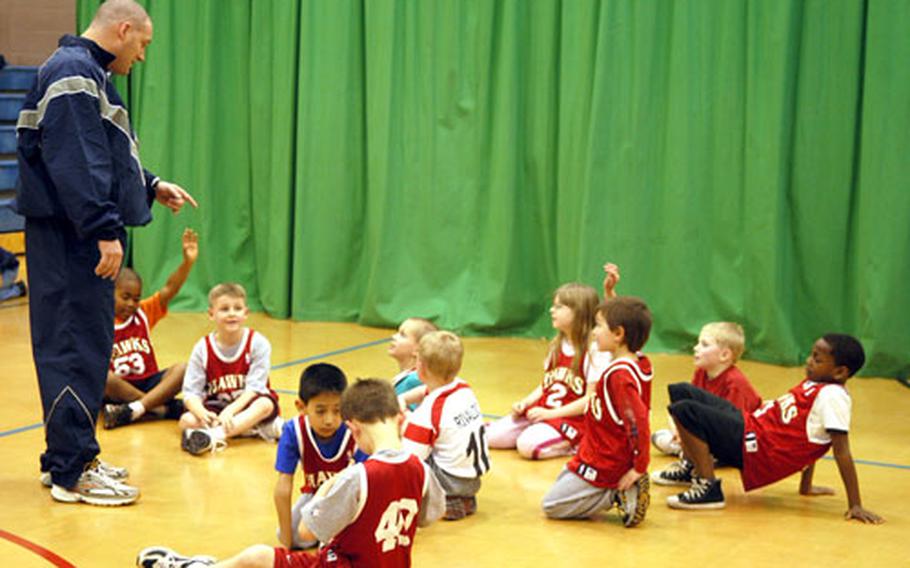 Bryant Martin, the Hawks head coach, talks to his players at the end of a practice last week at RAF Mildenhall&#39;s youth center. (Sean Kimmons / S&S)

Bryant Martin, the Hawks head coach, talks to his players at the end of a practice last week at RAF Mildenhall&#39;s youth center. (Sean Kimmons / S&S) 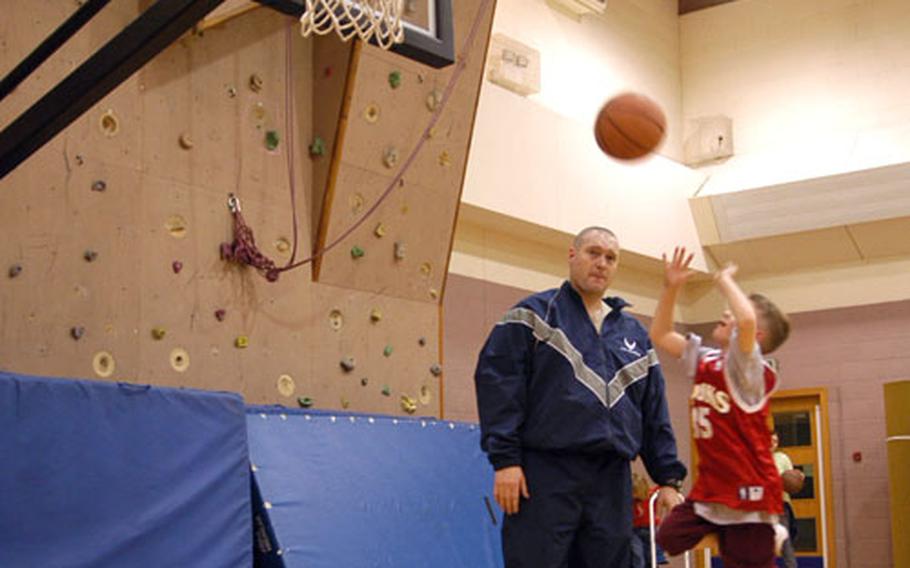 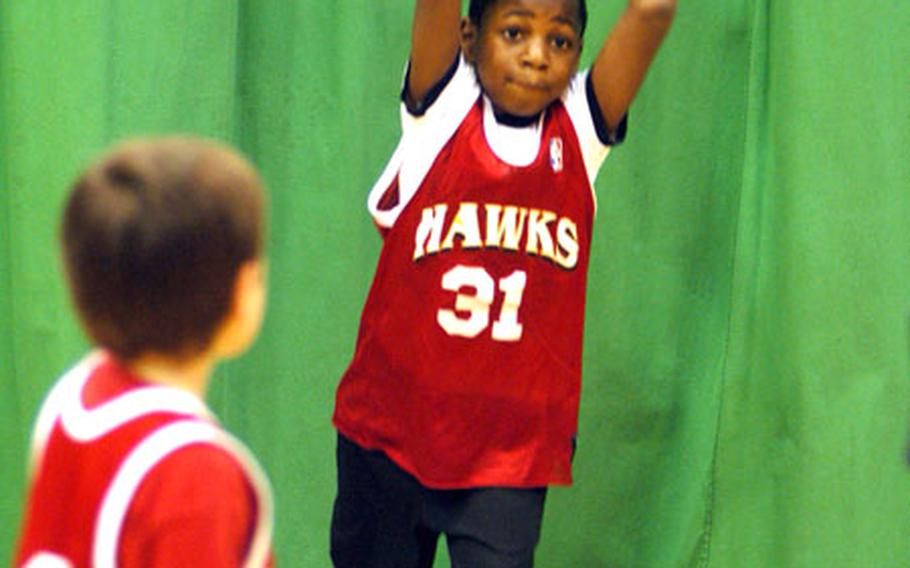 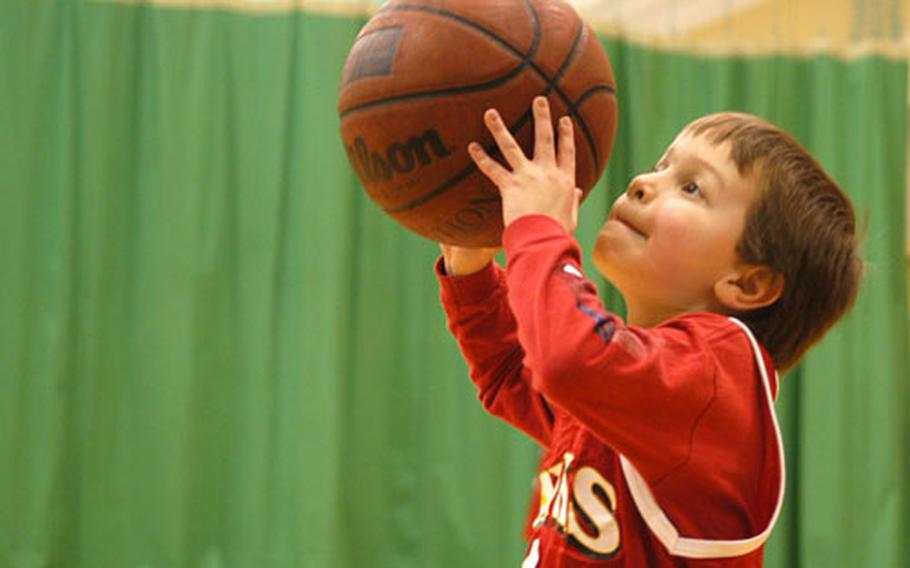 Dawson Buchanan, 8, puts up a shot at a basketball practice. (Sean Kimmons / S&S) 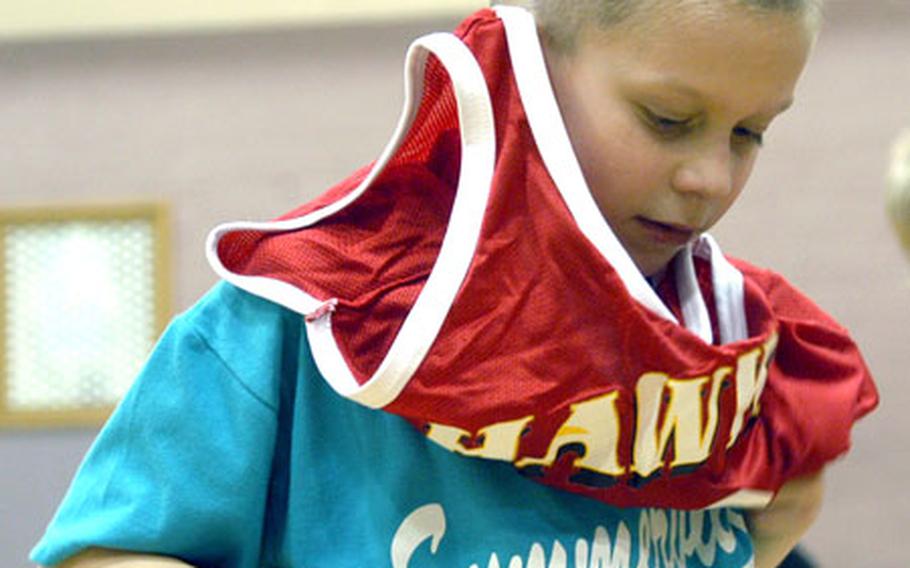 RAF MILDENHALL &#8212; A basketball team full of energetic kids jumped at the chance to don their red mesh jerseys during a practice in the base&#8217;s Youth Center last week.

Proudly wearing their Hawks jerseys, the kids ran around the basketball court knocking out drills presented by volunteer coaches. The players, ages 7 to 9 years old, tried to appease the coaches while a few couldn&#8217;t resist the temptation to goof off or throw wild shots during the 45-minute practice.

The Hawks are just one of 15 coed teams in the base&#8217;s 2008 youth basketball league, made up of almost 150 children preparing for the eight-week season that starts next month.

Although younger teams are already set up, there are still slots available in the league&#8217;s 13-to-15- year-old squads. Those interested should sign up by the first week of January to be on a team, which costs $40 to play the entire season, Wilcox said.

Teenagers play on traveling squads that have games at RAFs Alconbury, Lakenheath and Menwith Hill, about a 3&#189;-hour drive away. At the end of the regular season, teams battle each other in a tournament.

For the youngsters, the league is less competitive and allows them to burn all that energy they usually store up during the winter.

Besides having a lot of patience, the trick to coaching youngsters in basketball is to keep them active, said John Wilson, the Hawks&#8217; assistant coach and also a technical sergeant with the 488th Intelligence Squadron.

Wilson stepped up to coach for a third year after he heard that there was a shortage of coaches this year. Also, it&#8217;s a way to be closer to his son who is on the Hawks team.

Bryant Martin, the Hawks&#8217; head coach and a captain with the 488th, has three sons playing in the league.

&#8220;It allows them to learn how to work as a team and gets them out of the house,&#8221; said Martin, touching on the importance of youth basketball.

Other than basketball, the youth center offers youngsters the chance to play flag football, in-line hockey, baseball and volleyball as well as indoor and outdoor soccer at different times of the year, Wilcox said.