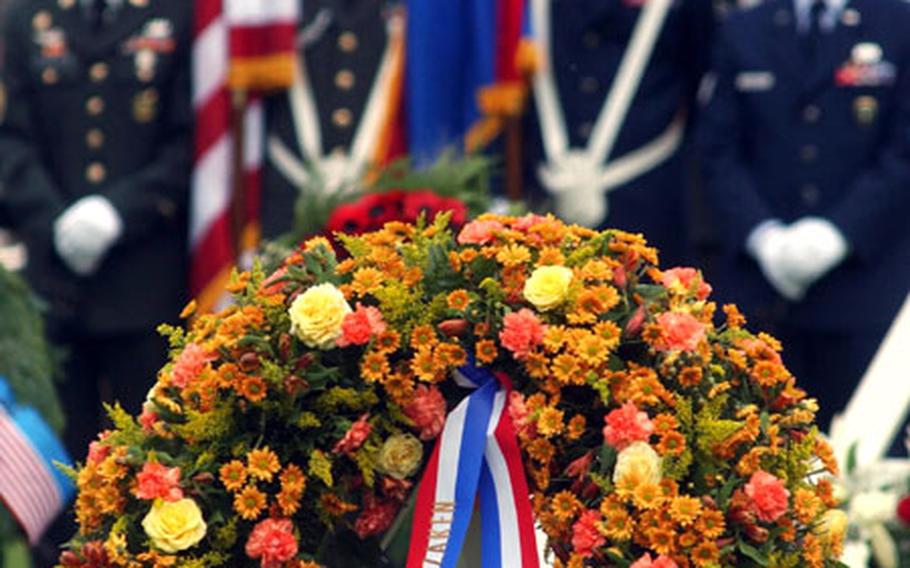 MARGRATEN, Netherlands &#8212; The last time Mike Colasurdo was in Holland, he was an 18-year-old medic jumping into combat with the 101st Airborne Division.

Nearly six decades later, Colasurdo was among hundreds of veterans who gathered Sunday at the Netherlands American Cemetery to honor the 8,302 troops buried in the Dutch countryside.

On Sept. 17, 1944, Colasurdo landed on nearby Son, and fought throughout the Battle of the Bulge in Belgium. Life was &#8220;day to day,&#8221; he said, when he was tasked to patch up the wounded and comfort the dying. Losing friends still brings him to tears.

During the ceremony, thousands of spectators gathered in the center of the cemetery to watch U.S. and Dutch troops assist dignitaries laying floral wreaths. About two dozen soldiers from the 254th Base Support Battalion out of Schinnen, Netherlands, supported the event alongside several Air Force personnel. The U.S. Army Europe band provided music.

Marine Corps Gen. James Jones, commander of NATO and U.S. forces in Europe, told a crowd of local Dutch, World War II veterans and family members why Americans gather on the last weekend in May to remember those who fought. In 1886, a shopkeeper in Waterloo, N.Y., closed up his shop and headed to a cemetery to pay his respects to Civil War dead.

Outside the crowd, among the seemingly endless rows of white marble grave markers, Lt. Col. Ted Martin strolled with his daughters, 8-year-old Christina and 6-year-old Katelyn. He brought the girls &#8220;to see a part of their heritage,&#8221; Martin said.

In the distance, airmen from the 701st Munitions Support Squadron fired a 21-gun salute. A bugler from the U.S. Army Europe band, perched on a monument high above the crowd, sounded taps. The somber notes carried with the wind across the fields.

The girls simply understood that American soldiers were buried under the crosses and Stars of David. They smiled and played in their long summer skirts, staying close to their father.

He pointed out a grave that had no name. &#8220;Here rests in honored glory a comrade in arms, known but to God,&#8221; Christina read aloud.

The cracking thunder of jet engines broke the silence, as formations of Dutch and American fighter jets stormed through the afternoon sky. As each passed, one of the four aircraft left their formation and shot skyward as the rest flew on.

As they walked on, the ceremony broke up and packs of aging paratroopers fanned out through the plots, some looking for friends killed in action.

One veteran, Clarence Goldsmith, 80, of Caseyville, Ill., recalled jumping into Grave with the 82nd Airborne Division on Sept. 17, 1944. Goldsmith was shot through the legs several times in WWII. He never thought he&#8217;d be an old man, looking out over the graves of the men he fought beside, he said.