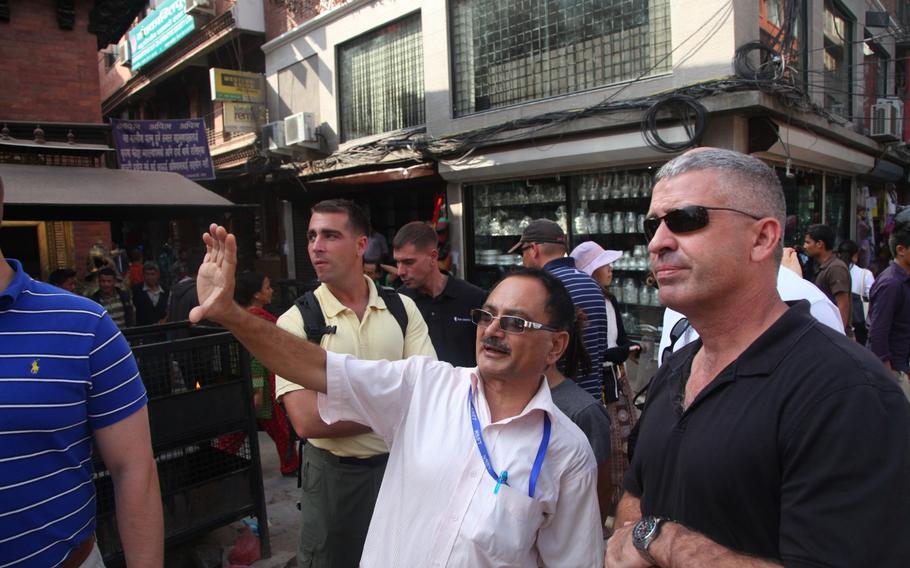 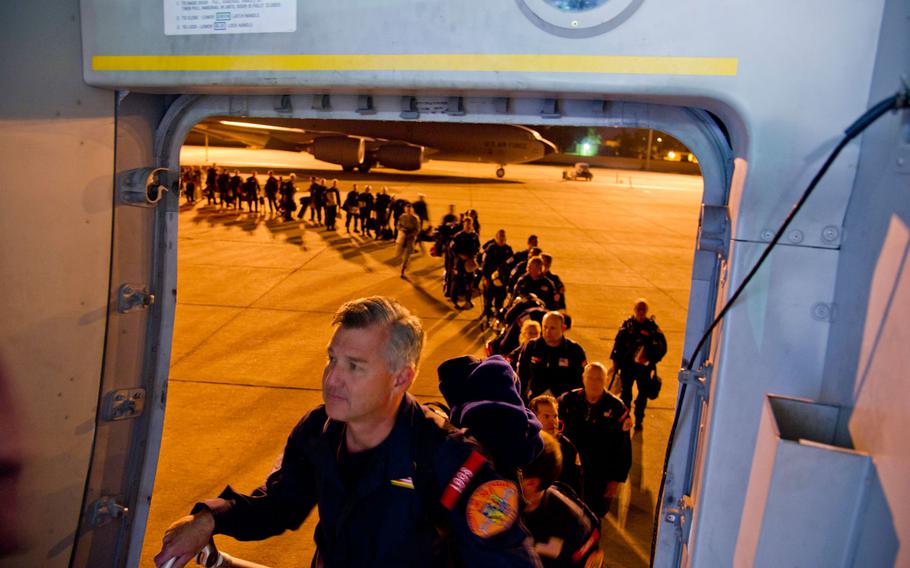 An urban search-and-rescue team made up of 57 members of the Los Angeles County Fire Department and 60,000 pounds of equipment, activated by the U.S. Agency for International Development, board a C-17 Globemaster III at March Air Reserve Base, Calif., on April 27, 2015. The team is deploying in response to the earthquake that struck near Kathmandu, Nepal on April 25, 2015. (Roy A. Santana/U.S. Air Force)

For the past five years, U.S. Pacific Command and its components have been busily helping the Nepal government prepare for the kind of massive earthquake that devastated the Himalayan country Saturday.

Although they knew it was likely coming, putting the preparations in action have proven difficult, sparking complaints that the disaster response has been too slow. The landlocked country is among the world’s poorest and is beset by political divisions and the challenges of getting to isolated villages.

And although Nepal’s neighbors have been quick to offer help, they also have their own political motivations that may not exactly dovetail with American cooperation.

“We all had a gigantic sense of urgency,” said Michael Korman, the plans and operations officer for PACOM’s Center for Excellence in Disaster Management and Humanitarian Assistance in Honolulu.

As of Tuesday afternoon, PACOM had received only a very limited request from Nepal for troops and equipment.

PACOM has sent a military joint humanitarian assistance survey team of about 20 people to Nepal to support the U.S. Agency for International Development’s Disaster Assistance Response Team, which is coordinating the U.S. government’s earthquake response and recovery efforts. The survey team, led by III Marine Expeditionary Battalion commander Brig. Gen. Paul Kennedy, is expected to arrive in Nepal on Thursday.

Scores of personnel from the disaster center, U.S. Army Pacific and Marine Corps Forces, Pacific, have trained for years side-by-side with Nepal’s armed forces who are now handling the relief effort, with India playing a major role.

During the past year, the disaster center has been partnering with the United Nations’ Office for the Coordination of Humanitarian Affairs in its planning for potential “mega-disasters” in five countries, said Col. Joseph Martin, director of the disaster center.

“Nepal — and the Kathmandu Valley — happens to be one of them,” he said. “So last September and just this last month we worked with UN OCHA to start some of that planning process.

“If you can plan and think about the big ones, that’s where the international community gets really involved, and that’s where a lot of the civilian-military interaction occurs.”

Streamlining that interaction is a primary role for the disaster center, he said.

In 2009, PACOM co-hosted Tempest Express, which brought together more than 250 regional participants in Nepal to develop a disaster-response contingency plan.

USARPAC held a disaster response exercises with the Nepali armed forces in 2011 and 2013, which included field training scenarios for a massive earthquake.

During two events in 2013, MARFORPAC and the III Marine Expeditionary Force held tabletop and field exercises for disaster relief.

Korman attended one of the earthquake response exercises in 2013 that included both U.S. soldiers and Marines.

“It was a week-long exercise out there in the field, right out where they’d set up in real life,” he said. “It was very realistic. We were there showing how the two nations could work together, but more importantly, we were essentially in a backseat role letting them take the lead.”

Over time, Nepal developed an “excellent” disaster response plan, he said. Part of that was an “open-space” plan that was funded in part by the U.S. Agency for International Development.

The project catalogued the roughly 85 significant open spaces in the capital, Kathmandu, such as parks and football fields.

Each was then designated a purpose in the event of a disaster — helicopter landing zone, field hospital, food distribution, command-and-control center, he said.

Whether all the planning will translate into successful search, rescue and relief in the quake’s aftermath, however, remains to be seen.

“The interesting thing is that [Nepal has] been very active in setting up the system —- but that’s the problem,” said Allen L. Clark, a senior fellow at the East-West Center in Honolulu and former executive director of the U.S. Defense Department’s Pacific Disaster Center.

While the country has been successful in setting up the “overarching” plan for earthquake response, it hasn’t been able to develop the “lifting capacity” to carry it through.

In addition, political instability has permeated the government since the end of the 10-year civil war with Maoist rebels in 2006.

“There are all these little parties and special interests that are competing in the political arena,” Clark said. “Basically it’s a poor country to start with, and that just drains the resources that should be there for this.”

And despite the history of bilateral planning between the U.S. and Nepal, leaders of the landlocked country likely feel a “certain amount of reluctance” to bring in U.S. troops and equipment for relief.

“There are overarching loyalties in all this,” Clark said, foremost to neighboring India, secondly to Pakistan. “And coming up strong from the back is number three, China. And all of which want a finger in the pie in Nepal. It makes it somewhat difficult for Nepal to have a move toward a large U.S. presence in Nepal. I think that’s the issue.”