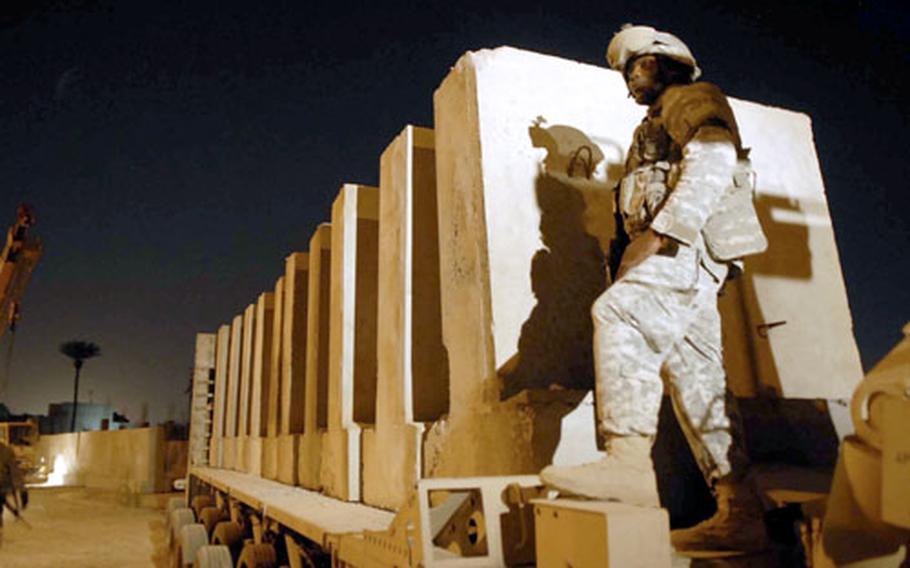 Sgt. Andrew Lane, 32, of Mansfield, La,, stands watch next to a truckload of concrete blast barriers. The walls will eventually seal off Baghdad’s Khadamiyah district from the rest of the city. (Heath Druzin / S&S)

Sgt. Andrew Lane, 32, of Mansfield, La,, stands watch next to a truckload of concrete blast barriers. The walls will eventually seal off Baghdad’s Khadamiyah district from the rest of the city. (Heath Druzin / S&S) 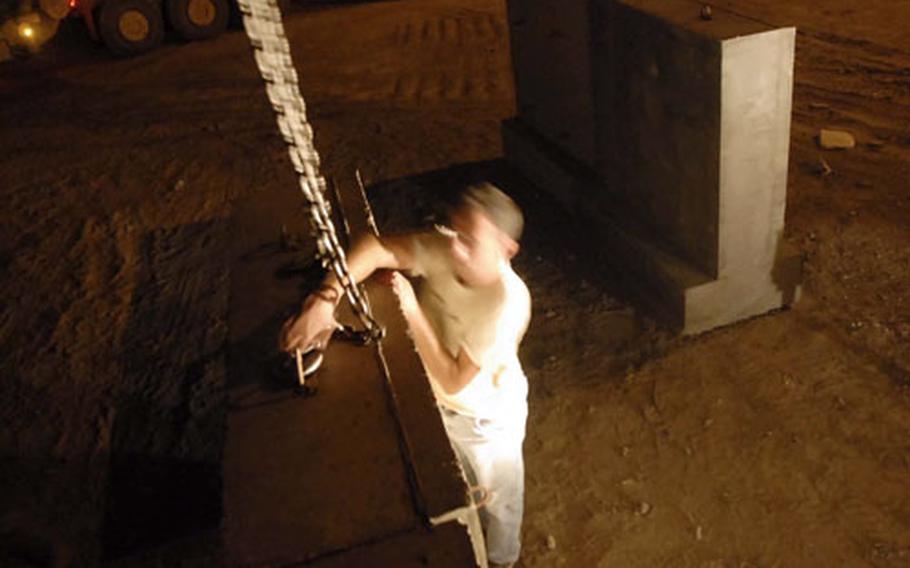 But miles of concrete are slowly encasing the area, and depending upon whom you talk to, they&#8217;re either keeping Khadamiyah from oblivion or slowly choking the life from it.

As blast walls are removed from many areas around Iraq amid a sharp drop in violence, authorities in Khadamiyah are beefing up security ahead of a massive annual pilgrimage, fearing a potential return to sectarian violence.

Referred to both reverentially and derisively as the "Great Wall of Khadamiyah," the barrier will eventually encase almost the entire neighborhood. The one part that won&#8217;t be walled off has the Tigris River as a natural barrier. When the project is finished, there will only be six checkpoints to enter the neighborhood by car, in addition to one bridge over the river that will be open to foot traffic only.

At the center of Khadamiyah, a Shiite stronghold in northwest Baghdad, is the massive golden-domed Khadamiyah shrine, the mosque where Imam Musa ibn Jafar al-Kadhim is buried.

Each day a steady stream of Shiite pilgrims, many from Iran, make their way through checkpoint after checkpoint along the hotel-lined boulevard that leads to the green metal gates of the mosque. Millions come to commemorate the death of Kadhim every year and security officials expect more than 10 million visitors this year for the event that will span several days in mid-July.

Even through Iraq&#8217;s darkest days, the mosque has remained unharmed.

But recent violence has been close enough to rattle security officials &#8212; twin suicide bombings on April 24 killed dozens of people just blocks from it.

That attack was enough to convince Brig. Gen. Dhafir Abd Radi, who oversees Iraqi National Police efforts in the district, that checkpoints and patrols were not enough and sealing off the neighborhood is the solution.

Asked what would happen if the mosque was attacked, Radi shakes his head.

U.S. Army Lt. Col. John Vermeesch, who oversees operations in Khadamiyah, applauds the effort and would like to see even more stringent security measures around the mosque, such as screening of bags.

&#8220;I think the Khadamiyah shrine will be a target for Sunni extremists long after we have left Iraq,&#8221; he said.

Construction of the wall is proceeding at a furious pace and dozens of gates have also gone up, keeping out anyone but residents and keeping both terrorists and business at bay. The goal is to have the wall finished and all checkpoints operating ahead of the July pilgrimage.

The wall and gates have driven a wedge between those living in Khadamiyah.

Limiting access to such a holy site as the Khadamiyah shrine borders on sacrilege, said Audet Hamudi Ibrahim, 35, who owns a car repair shop.

Like many business owners, Ahmed Saddon Ghaydan, 45, who runs a tea shop not far from the mosque, says the wall is hammering his bottom line &#8212; a sentiment echoed by numerous business owners in the neighborhood. He questions the effectiveness of the recent security measures, pointing to the recent suicide bombing in the area.

Radi said he feels for the people of Khadamiyah, but that their living conditions are subordinate to the protection of the mosque. He dismisses the concerns of business owners as selfish, referencing Shakespeare to make his point.

Asked how long the wall will need to remain, Radi hedges &#8212; it won&#8217;t be permanent he said, but Khadamiyah won&#8217;t be a buzzing district of late-night cafes for quite some time. There&#8217;s still the tall task of a house-to-house sweep of a district with hundreds of thousands of people.