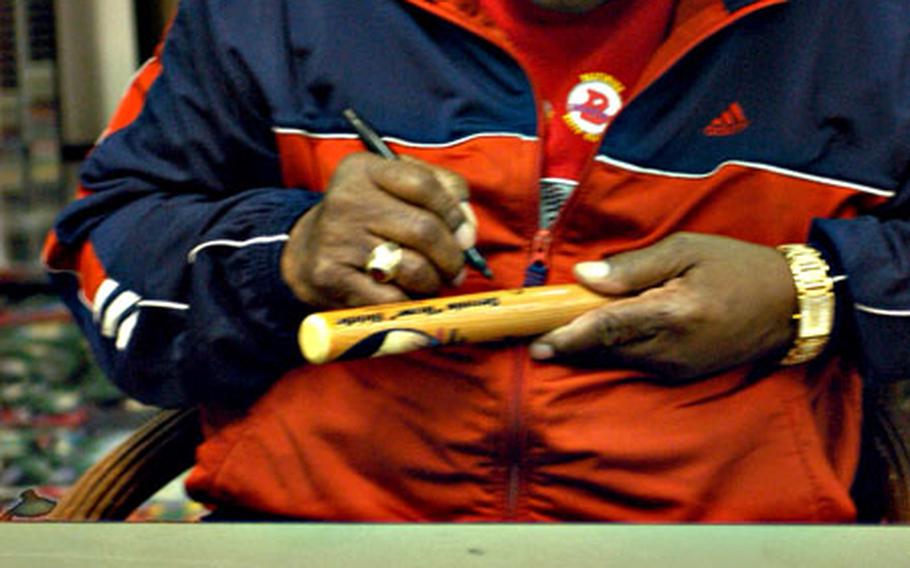 Dennis Biddle, the youngest player ever in the Negro League, signs an autograph Saturday in the Yujo Recreation Center at Yokota Air Base, Japan. Biddle signed with the Chicago American Giants in 1953 at age 17. (Vince Little / S&S)

YOKOTA AIR BASE, Japan &#8212; Residents here are getting a vivid glimpse of the past at the outset of Black History Month.

Dennis Biddle, president of the Yesterday&#8217;s Negro League Baseball Players Foundation, is on a 10-day trip to Yokota, where he&#8217;s visiting schools and sharing tales about the sport&#8217;s legacy in America.

On Saturday, he took part in a cake-cutting ceremony at the Yokota Community Center marking the official start of the month&#8217;s activities, then headed to the Yujo Recreation Center for a brief autograph session. He was scheduled to appear at a youth clinic Sunday outside the gates with about 80 Japanese Little League players.

In 1953, Biddle became the Negro League&#8217;s youngest player ever when he signed with the Chicago American Giants as a 17-year-old right-handed pitcher out of Magnolia, Ark. He won 16 games that year, and after a 15-4 campaign the following season, his contract was purchased by the Chicago Cubs.

He reported to the club&#8217;s spring training facility at Mesa, Ariz., in February 1955. On the first day, Biddle broke his left ankle in two places while sliding into third base during a base-running drill. The injury ultimately ended his baseball career, and Biddle attended college and worked for 24 years as a social worker.

In 1995, Biddle was invited to the Negro League Museum in Kansas City, Mo., for the 75th anniversary of the league&#8217;s beginning. There were 314 players still living at the time, and that&#8217;s when he learned many were without retirement benefits and medical insurance of any kind.

&#8220;That led me to wonder why the word &#8216;Negro League&#8217; was never protected for us,&#8221; Biddle said. &#8220;People were selling a lot of memorabilia and merchandise. Anyone could use the name &#8216;Negro League&#8217; and profit. There were rackets out there claiming to represent the players making millions of dollars off our names and likeness &#8212; and not one cent was going to those who played the game.

&#8220;So I organized a group to represent the living players. In 1996, we copyrighted the Yesterday&#8217;s Negro League Baseball Players Foundation, set up to get benefits to living players.&#8221;

Now 69, Biddle lives in Milwaukee but travels the country, speaking at schools, colleges and military bases about the league&#8217;s history. The foundation offers up memorabilia such as autographed baseballs, posters, calendars and bats in exchange for donations, which are used to assist those in need.

During a stop at Nellis Air Force Base, Nev., three years ago, Biddle met Styles, who was then stationed at Hickam Air Force Base in Hawaii. Styles ultimately arranged several visits by Biddle to the Aloha State, and he&#8217;s planning to bring Biddle back to Yokota in June 2006, possibly with three other former Negro League stars.

After arriving Tuesday on his first tour of Japan, Biddle made two appearances on Eagle 810 last week and also hit Yokota West Elementary School and Yokota Middle School. He spoke at a luncheon Friday for the Yokota Enlisted Spouses Club and later met with Col. Mark Schissler, the 374th Airlift Wing commander.

He was to visit students at Yokota East Elementary School on Monday, meet again with the Yokota Enlisted Spouses Club that evening and then head to Yokota High School on Wednesday afternoon. On Tuesday, he&#8217;s signing autographs all day at the Yujo.

Biddle said Saturday there are 120 individuals alive today who played in the Negro League, which sprang up in the United States when major league baseball owners in the late 19th century secretly established the infamous &#8220;gentlemen&#8217;s agreement&#8221; as a way to keep black players out.

After Jackie Robinson broke the color barrier in 1947, he said, many historians and writers turned attention away from the Negro League, but the organization remained alive for another 13 years, developing future Hall of Famers like Ernie Banks, Willie Mays and Hank Aaron in the 1950s.

Biddle has written a book called &#8220;Secrets of the Negro League,&#8221; which is scheduled for release at the end of this month.

Additional information on the Yesterday&#8217;s Negro League Baseball Players Foundation can be found on its Web site.

Biddle said his purpose in life is to set the record straight within the great American pastime.

&#8220;There are a lot of things out there about our league that&#8217;s not true,&#8221; he said. &#8220;People have distorted the real truth in Hollywood movies and books to make money off our name and likeness. Before I leave this Earth, I want to make sure young people know about the true history of Negro League Baseball. That&#8217;s my true work.&#8221;