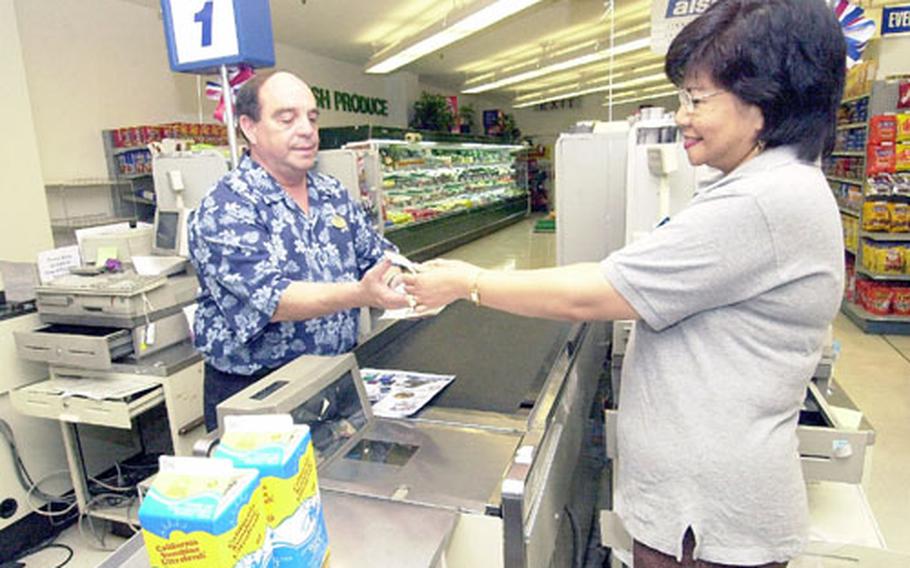 Fred Garcia, general manager of the Negishi Club, accepts change from cashier Helen Narita at the Negishi Exchange. The exchange was awarded the Bingham Award for 2003. (Jim Schulz / S&S)

Fred Garcia, general manager of the Negishi Club, accepts change from cashier Helen Narita at the Negishi Exchange. The exchange was awarded the Bingham Award for 2003. (Jim Schulz / S&S) 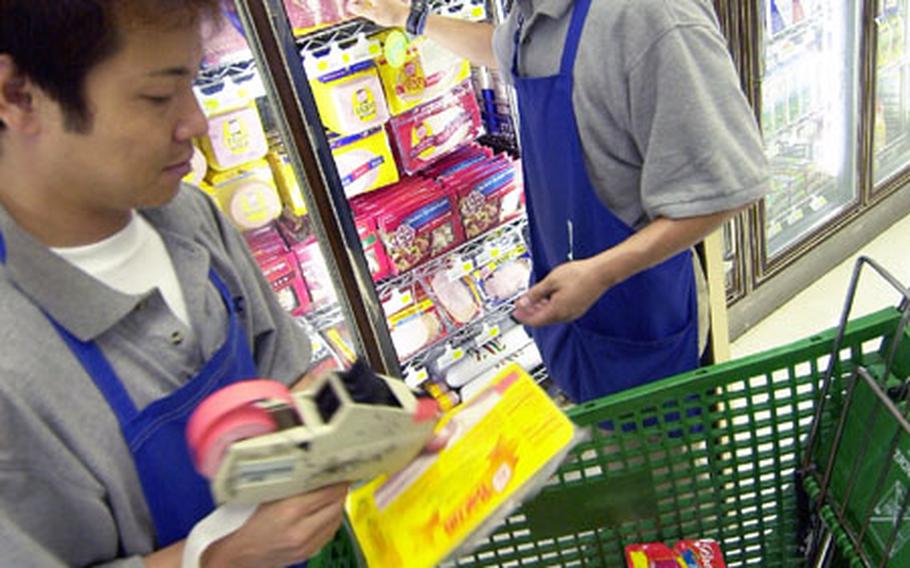 Tohru Tominara, at left, and Satoru Shibuya stock the refrigerator with luncheon meats at the Negishi Exchange. The exchange won the Bingham Award for 2003. (Jim Schulz / S&S)

One thing the military has lots of is ribbons, medals and awards. But for the Navy Exchange, there is one great honor, once a year, that can be striven for: It&#8217;s the Bingham Award.

For the first time since the early 1990s, according to Pat Patterson, NEX human resources manager for Japan, and the second time since the awards were instituted in 1979, the Negishi Heights NEX Mart has taken home the gold. The NEX Mart was named best NEX in the &#8220;small stores&#8221; category for fiscal year 2003.

They beat out some seven to 10 other small exchanges, Patterson said, mainly because, &#8220;they had a very high customer service index,&#8221; which is retail-ese for satisfied customers.

Additionally, Patterson said, the store&#8217;s 26 or so employees were unusually happy and loyal, and the store also met other winning qualifications: cost-cutting, goods availability, contribution to the Morale, Welfare and Recreation program and other measures indicating how well the store was doing its mission.

Negishi&#8217;s store is a relative rarity: a combination Navy Exchange and commissary store. While selection may be more limited, it&#8217;s possible to buy hamburgers and batteries in one stop.

The Bingham award&#8217;s namesake was Capt. W.H. Bingham, who helped establish the Navy Exchange stores in the 1940s. He decided they should be operated like a chain of retail stores and staffed by civilians, except for top management positions held by naval supply officers. The stores now number 109, as well as 187 ship stores and 41 Navy Lodges.

Before the NEX chain was established, sailors had to rely on ship stores, which replaced ship canteens, which replaced bumboats &#8212; small vessels that in the 1800s pulled beside Navy ships and sold cheap goods for high prices.

All the Negishi Heights employees were feted at a breakfast Tuesday at which NEX dignitaries congratulated them &#8212; on the clock, Patterson said &#8212; and were given boxes of chocolates.

Among them was manager Alice Zamora, who said she was pleased and surprised by the recognition. &#8220;My boss put in for it,&#8221; she said.

But would the Bingham mean a raise for Zamora?