Needle is sharp, big and could save a life 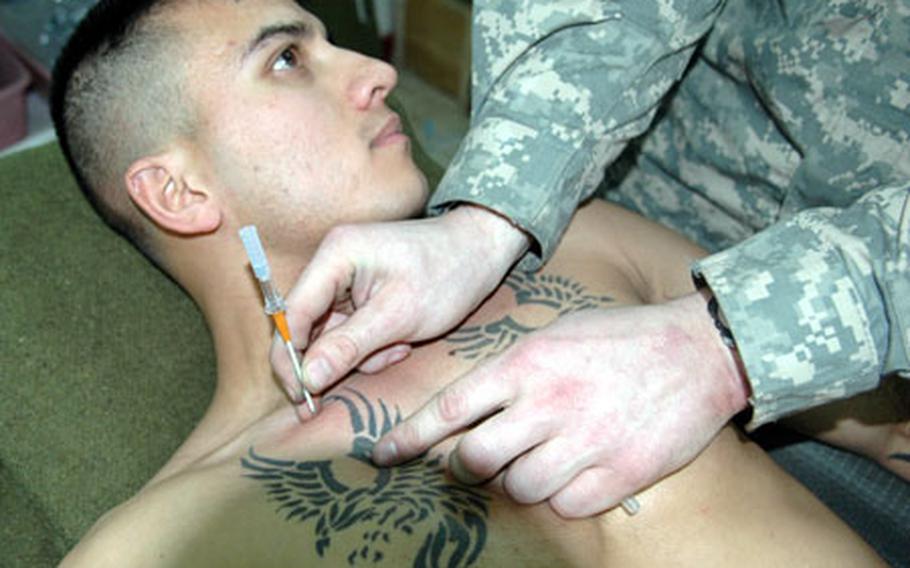 Capt. Gerald “Wayne” Surrett, 35, brigade surgeon for the 2nd Infantry Division’s 2nd Brigade Combat Team, shows the exact place to stick the 14-gauge needle during an emergency chest decompression procedure. To show the non-sterile, emergency conditions most soldiers would find themselves in the field, Surrett did not wear gloves or use antiseptics to sterilize the chest of his demonstration “victim,” Spc. Ralph Dover, 26, of Canton, Ohio. (Lisa Burgess / S&S)

Capt. Gerald “Wayne” Surrett, 35, brigade surgeon for the 2nd Infantry Division’s 2nd Brigade Combat Team, shows the exact place to stick the 14-gauge needle during an emergency chest decompression procedure. To show the non-sterile, emergency conditions most soldiers would find themselves in the field, Surrett did not wear gloves or use antiseptics to sterilize the chest of his demonstration “victim,” Spc. Ralph Dover, 26, of Canton, Ohio. (Lisa Burgess / S&S) 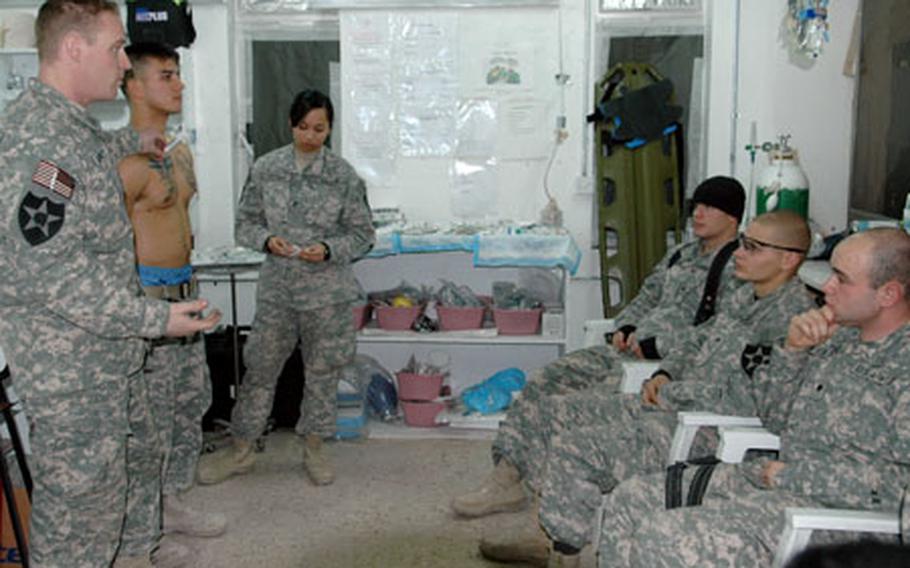 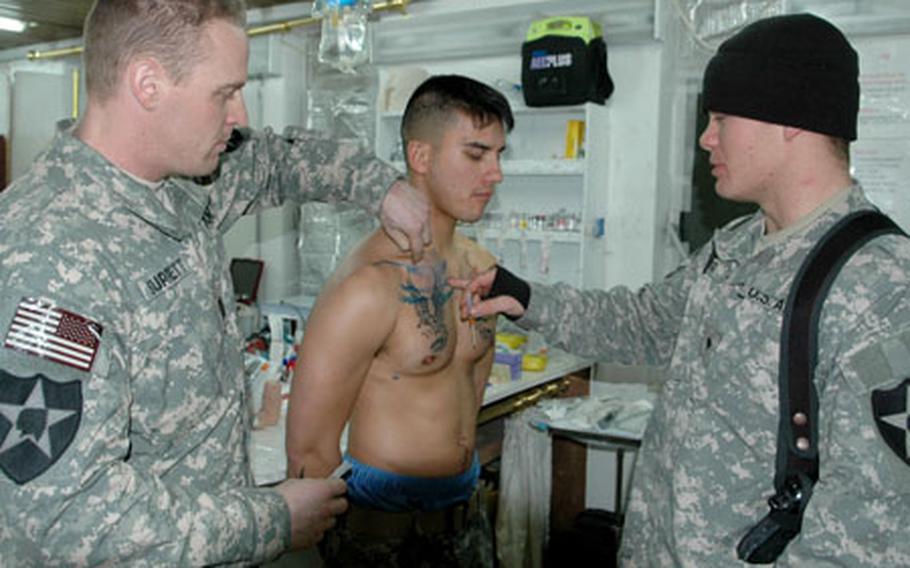 In fact, if the business end of this needle weren&#8217;t so sharp, it might even seem like a joke, some comedian&#8217;s prop for a sketch about a mad doctor who likes to scare patients.

The soldiers gathered last week for a refresher training session at the aid station for Forward Operating Base Loyalty handled the needle gingerly. After Capt. Gerald &#8220;Wayne&#8221; Surrett had unwrapped the needle and passed it out, the troops, all qualified as soldier first responders, acted as though it was going to leap out of their fingers and stab them.

Ford paused. He looked Surrett in the eye.

Soldier First Responder (SFR) kits are stuffed with bandages, tourniquets, wraps, scissors and other gear designed mainly to stop bleeding on the battlefield. Those kits also come with one 14-gauge needle, and this item has only one, very specific use: to treat a medical condition called &#8220;tension pneumothorax.&#8221;

But interviews with military medical professionals and SFR-qualified soldiers show a problem with the needle, and it comes in two parts: the &#8220;oh, ick&#8221; factor associated with sticking a needle in someone; and training that seems to have left a lot of soldiers confused about what the needle is for and how to use it.

Tension pneumothorax occurs when the closed vacuum system that keeps the lungs inflated in the chest is somehow damaged.

Air enters the chest cavity, but it can&#8217;t escape, creating pressure on a lung. As the pressure builds, the lung collapses further, making it very hard for the victim to breathe. The lung also can press against major blood vessels of the heart, so it can&#8217;t pump blood as well, lowering blood pressure and possibly prompting a deadly heart attack.

It&#8217;s not rare, either; after uncontrolled bleeding, &#8220;tension pneumothorax is the second leading cause of preventable death on the battlefield,&#8221; accounting for 5 percent of all preventable deaths in wars since World War I, including Iraq, Surrett said.

The good news is that the treatment for tension pneumothorax is easy: needle compression, in which a long, wide needle is thrust into the upper chest to allow air in and equalize the pressure vacuum.

Last year, the Army began including the needles in its SFR combat medical kit and teaching soldiers how to do needle decompression in the SFR course, which is an enhancement of its predecessor, the Combat Lifesaver course, Surrett said.

The SFR course is an intensive, 40-hour, hands-on class that includes battlefield simulations, such as light and noise, to try to make the setting as close as possible to what might actually happen in combat.

Army standards require that a certain percentage of soldiers at each unit level hold either an SFR, combat lifesaver rating or one of the higher medic ratings, such as emergency medical technician. Commanders also can require higher standards of their own units.

In the 2nd Brigade Combat Team, Col. Jeffrey Bannister, the commander, decided that all of his soldiers who were not medics must have either a previous combat lifesaver rating or be sent through SFR before deploying to Iraq from Fort Carson, Colo., last summer.

And as the 2nd BCT&#8217;s surgeon, Surrett has made it his mission to make sure all the brigade&#8217;s now-qualified soldiers continue to get the refresher training they need to know exactly how and when to use the 14-gauge needle.

The Army&#8217;s standard combat lifesaver kit does not include the needle. But for this Iraq deployment, Surrett had his medics make sure all the bags used by the brigade do, since the entire unit is supposed to be trained in the needle&#8217;s use.

&#8220;Education is the key to saving lives on the battlefield,&#8221; Surrett said. &#8220;Our medics train every day here in the aid station, but we need to synchronize that with what our guys are actually doing in the field.&#8221;

To do that well, Surrett makes sure he keeps his class basic and simple, avoiding medical jargon.

During the refresher class at FOB Loyalty, Surrett urged the soldiers not to get confused and worry &#8220;about all the things they taught you that you forgot.&#8221;

When should I get the needle out and use it?

If you&#8217;re in the field and someone on your team gets a serious chest wound, whether it&#8217;s open or closed. There may not be visible blood &#8212; snapped ribs or the concussion from a roadside bomb blast can cause a pneumothorax, and you&#8217;d never know there&#8217;s anything going badly wrong until the victim starts having problems breathing.

What symptoms should I look for?

There are a lot of complicated medical symptoms professionals use to diagnose pneumothorax, but there&#8217;s only one soldiers absolutely need to remember: breathing difficulties. You need to think &#8220;needle decompression&#8221; when a victim with a chest wound is struggling harder and harder to draw breathe. If they are conscious, they&#8217;re going to start acting very anxious and worried about their inability to breath. If they&#8217;re unconscious, their breathing will become increasingly labored, rapid, and shallow. Stick them with a needle.

Where should I stick the needle?

Just find the center of the patient&#8217;s left clavicle (the collarbone) on the side of the wound, if you know where it is. If you don&#8217;t, guess. If you&#8217;re wrong, you can always do the other side. The center of the clavicle is straight up from the nipple. Bounce the needle off the bottom of the collarbone and push it into the first free space that isn&#8217;t bone, until you feel a little &#8220;pop.&#8221; It will feel sort of like pushing a plastic straw into a drink box.

How hard do I have to push the needle, and how far in?

Don&#8217;t monkey around making little pinpricks on the surface of the skin. Jam it. Take a deep breath and push the needle firmly and smoothly, all the way to the hub, which is the plastic thing at the end.

What will happen when I do it right?

It&#8217;s pretty dramatic: The patient&#8217;s gasping, wheezing, ragged breath will immediately ease. You may or may not hear a small rush of air from the needle. But the main thing is that the patient will feel better right away.

What should I do once the needle is in?

There are two kinds of needles out there: those with plastic catheters and those without. If you have a needle with a catheter, once the needle is in, you can remove the sharp part, leaving the plastic catheter in place. If you just have a plain needle, keep in where it is. Carefully tape whatever you left in position as best you can. Then make sure that whoever is taking over the next step of care &#8212; a medic, physician&#8217;s aide, or doctor &#8212; knows it&#8217;s there.

Don&#8217;t hesitate to put a second needle in, or even a third. Air may be building up faster in the chest cavity than a single 14-gauge needle can handle. You may need to synchronize multiple needles to give enough air a chance to escape. This is not unusual. Just place the additional needles in the same general area as the first one, in the free space between the rib bones.