An Army sergeant prepares a howitzer to be picked up by a helicopter Tuesday from Forward Operating Base Asadabad in Afghanistan. (Steve Mraz / S&S)

An Army sergeant prepares a howitzer to be picked up by a helicopter Tuesday from Forward Operating Base Asadabad in Afghanistan. (Steve Mraz / S&S) 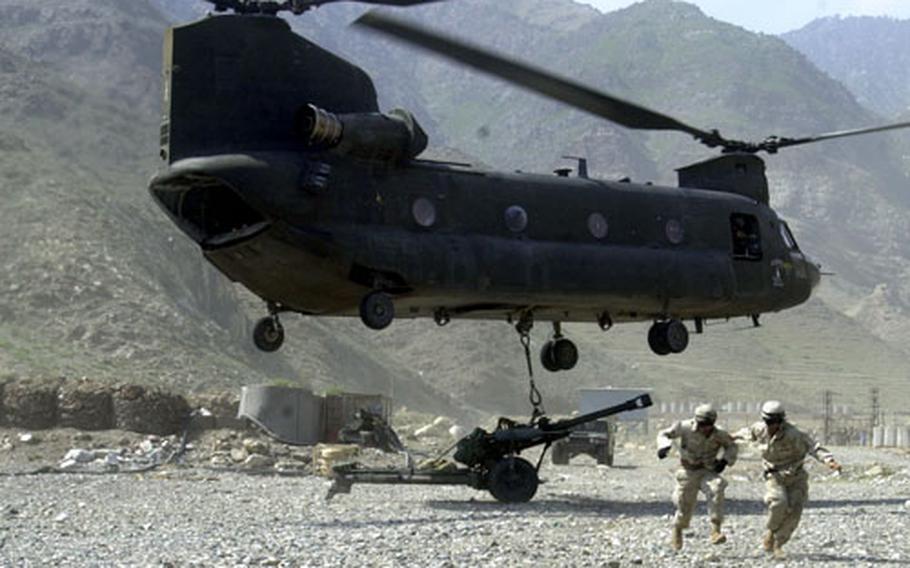 Army Sgt. Earl Ullom and Spc. Ben McKandles with Delta Battery, 319th Airborne Field Artillery Regiment, 173rd Airborne Brigade out of Vicenza, Italy, get out of the way of a Chinook helicopter Tuesday after attaching the 105mm howitzer cannon to the bird. (Steve Mraz / S&S) The Chinook helicopter lifts off with the 105mm howitzer. (Steve Mraz / S&S)

In this case, the angel was a howitzer that had &#8220;Angel of Death&#8221; painted on its barrel and was slung to the undercarriage of a Chinook helicopter.

The movement does not mean that FOB Asadabad is without howitzers, though, as several of the big guns still remain on the fortified Kunar province base.

In the mountainous Afghan environment known for its bad roads, airlifting cargo is the way to go.

The hulky howitzer is capable of hitting targets several miles away. Ullom had nothing but praise for the weapon.

Likewise, Breen had nothing but praise for his platoon, which has been called to provide fire support for all four branches of the military.