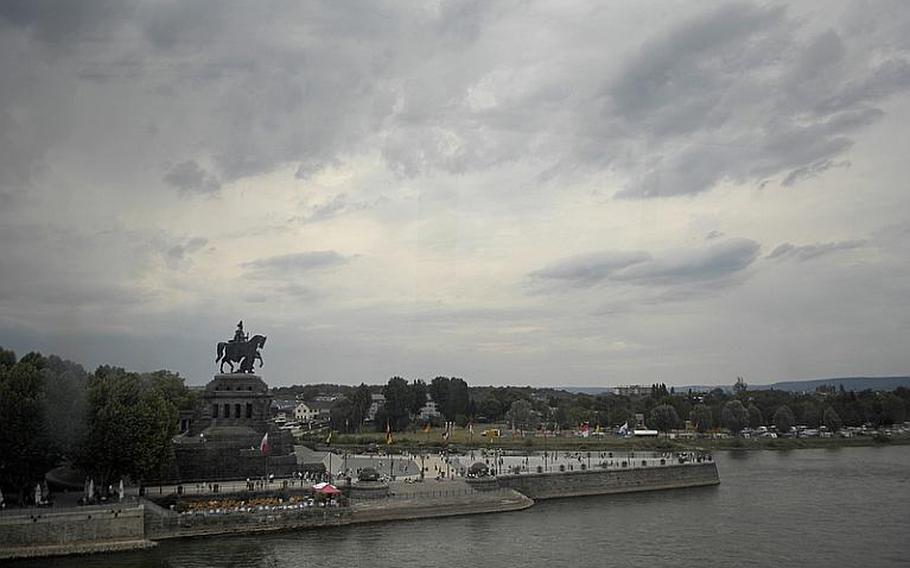 Buy Photo
The Mosel River meets the Rhine River at Koblenz. About 45,000 residents of the German city, nearly half of its population, are under evacuation orders Sunday following the discovery of what local officials said was one of the largest unexploded bombs ever found, believed to have been dropped by the British Royal Air Force during World War II. (Joshua L. DeMotts/Stars and Stripes)

WIESBADEN, Germany &mdash; About 45,000 residents of the German city of Koblenz, nearly half of the city&rsquo;s population, are under evacuation orders Sunday following the discovery of what local officials said was one of the largest unexploded bombs ever found, believed to have been dropped by the British Royal Air Force during World War II.

The nearly 4,000-pound bomb, packed with more than 3,000 pounds of explosives, as well as other unexploded ordnance, were discovered in the Rhine River, where the water levels have dropped significantly due to a lack of rain over the past few weeks, according to local authorities.

Explosive ordnance disposal troops with the 21st Theater Sustainment Command in Grafenwoehr and Mannheim are ready to provide support if needed, said a 21st TSC spokeswoman.

&ldquo;Our EOD guys have not been asked to support, but they are tracking it and stand by to assist if asked,&rdquo; said Lt. Col. Anna Friederich.

The city&rsquo;s press office said German explosive experts and the German army are expected to take the lead in defusing the bomb, which they are calling an air mine. Officials estimated that a bomb this size could cause a crater more than 20 yards wide and six yards deep with a destruction radius of more than 70 yards if it were detonated. It could blow out windows in a half-mile radius.

From discussions with the British, &ldquo;it has been known for some time that this type (of bomb) was dropped over Koblenz,&rdquo; wrote the city&rsquo;s press office in an email.

Authorities with the city&rsquo;s fire brigade say plans are under way to evacuate 45,000 city residents in a radius of about a mile, as well as a prison and local hospitals before experts attempt to defuse the bomb on Sunday. Emergency centers are being set up for those who have nowhere else to go.

According to German news outlets, the bomb lies in about 16 inches of water, partly buried in mud, making it difficult to access the detonation fuse.

City officials said Wednesday afternoon that they are still in the planning phases of how to defuse the bomb, which they say is one of the largest found in German history.

A 275-pound American bomb and a German smoke grenade were also found nearby.

Stars and Stripes reporter Marcus Kloeckner contributed to this report