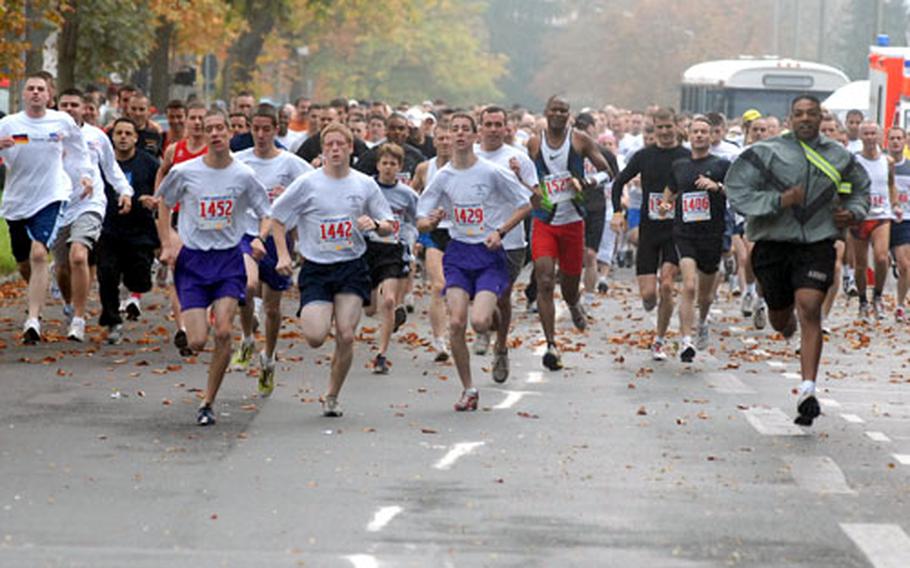 Hundreds of runners head down Darmstadt, Germany&#39;s Ludwigshöhstrasse on their way to Frankenstein Castle, a little more than 8 — mostly uphill — miles away, at the start of the annual Frankenstein Castle Run. (Michael Abrams / S&S)

Hundreds of runners head down Darmstadt, Germany&#39;s Ludwigshöhstrasse on their way to Frankenstein Castle, a little more than 8 — mostly uphill — miles away, at the start of the annual Frankenstein Castle Run. (Michael Abrams / S&S) 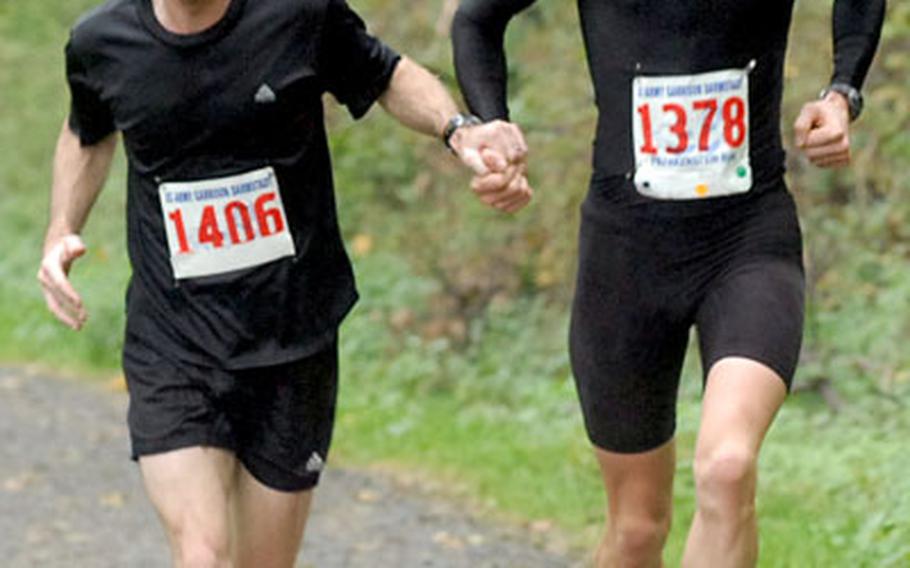 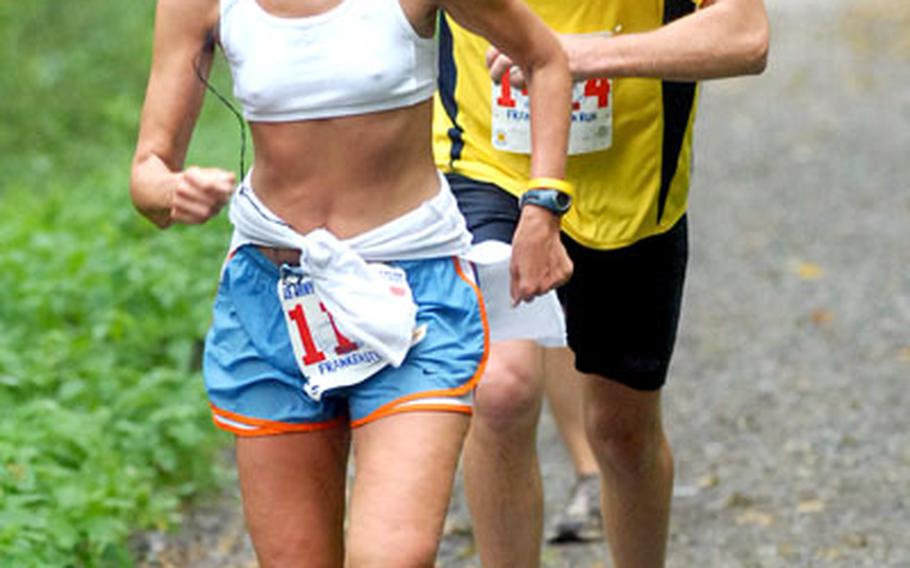 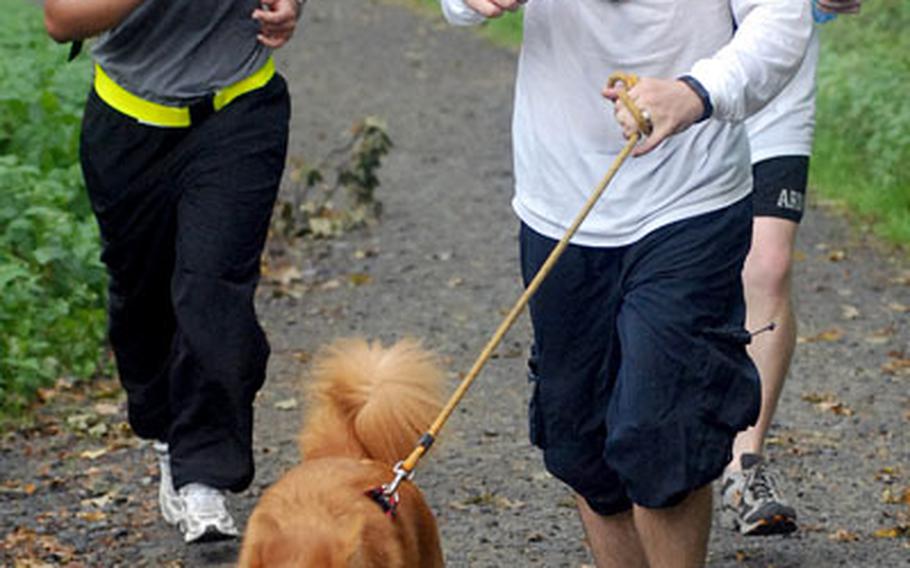 Teddy Leddy the dog leads a group of Darmstadt, Germany, runners — including his owner Aaron Leddy, center, Whitney Parks, left, and Richard Winn — to the finish line. Teddy wasn&#39;t the first canine finisher, but he beat a lot of two-legged competitors across the line. (Michael Abrams / S&S) 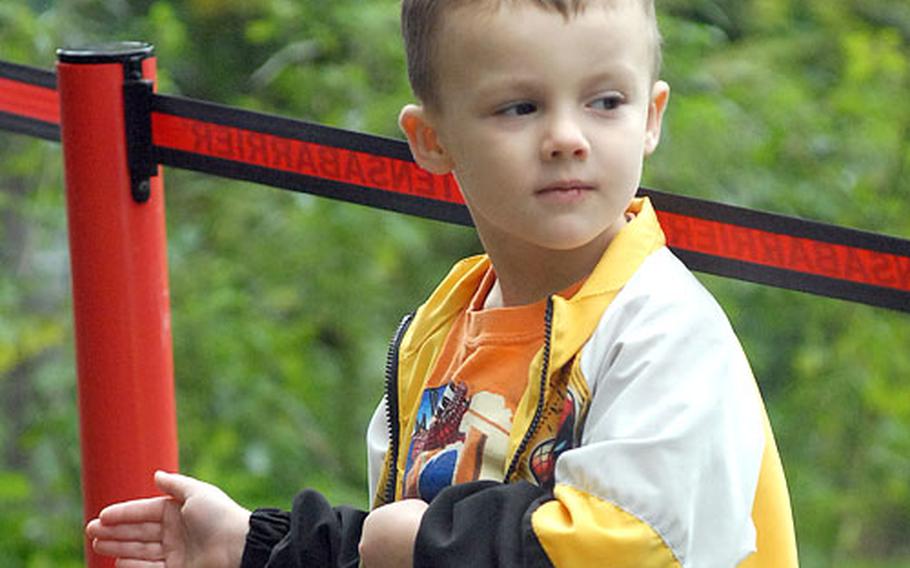 Three teens, an airman and a clarinet player beat an Army Ranger in a footrace. Surely, stranger things have happened at Frankenstein Castle on Friday the 13th.

Despite the inauspicious date and spooky destination &#8212; or maybe because of them &#8212; more than 622 people from Germany and Italy signed up to scamper their way to the finish line of the 27th Frankenstein Castle Run. Not all started, but 597 brushed off the gloomy weather to finish the race.

Rainer Goth, the highest-finishing member of the German team Hell on Legs, had high hopes at the starting line. Last year, his team took second, the year before that third.

Nancy Drose, who was in the race for her second time, had lower expectations.

Not everyone took the run so lightly.

&#8220;We ran harder than we were supposed to today,&#8221; said Bobby Diaz, who covered the 13-kilometer course in 50:53 to take sixth overall and third on his team &#8212; the Mannheim Beasts. They outran Hell on Legs to take first place in the team category.

Four of the top 10 finishers were Beasts, members of the Mannheim High School cross-country team.

Three of the Beasts were 16-year-old triplets &#8212; Tim, Brandon and Matt Spicer. Tim was third overall, Matt was fourth and Brandon ninth. Last in for the Beasts was Adam Cornelius, still no slouch, in 26th place.

&#8220;You shamed a lot of military professionals out there,&#8221; Staff Sgt. Andrew Moore, an Army Ranger and member of the 1st Battalion, 503rd Infantry Regiment (Air Assault), told the Beasts after he finished eighth.

&#8220;They get off on that,&#8221; 1st Sgt. Donald Spicer, father of the triplets and a former winner of the castle run, said of the teens trouncing their military competition.

Benjamin Martinelli, a clarinet player in the U.S. Army Europe band and an avid triathlete, along with Neil Hersey, were the first two finishers, crossing the line hand-in-hand.

Martinelli&#8217;s usual training partner &#8212; Duke &#8212; is even faster than Martinelli, but he didn&#8217;t participate in the race, partly because of his lack of a sense of direction, Martinelli said.