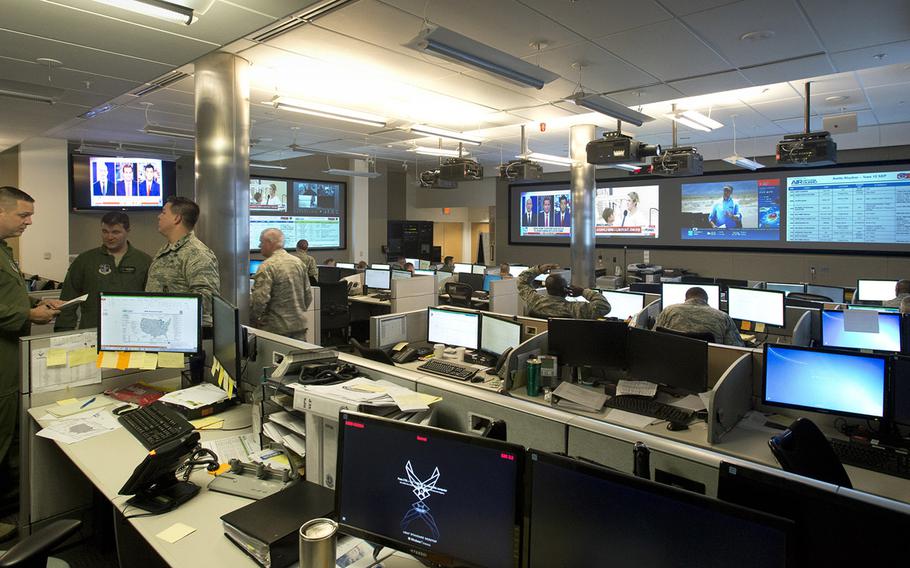 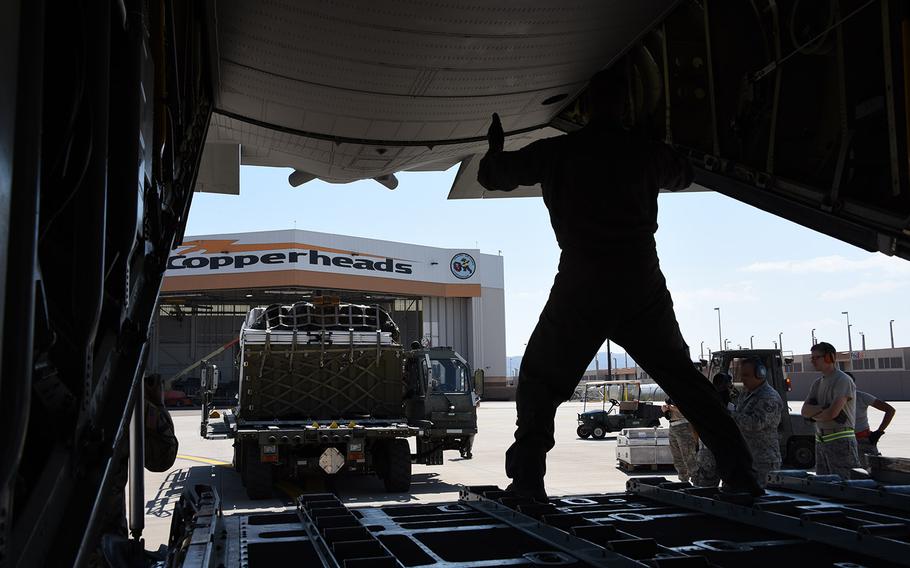 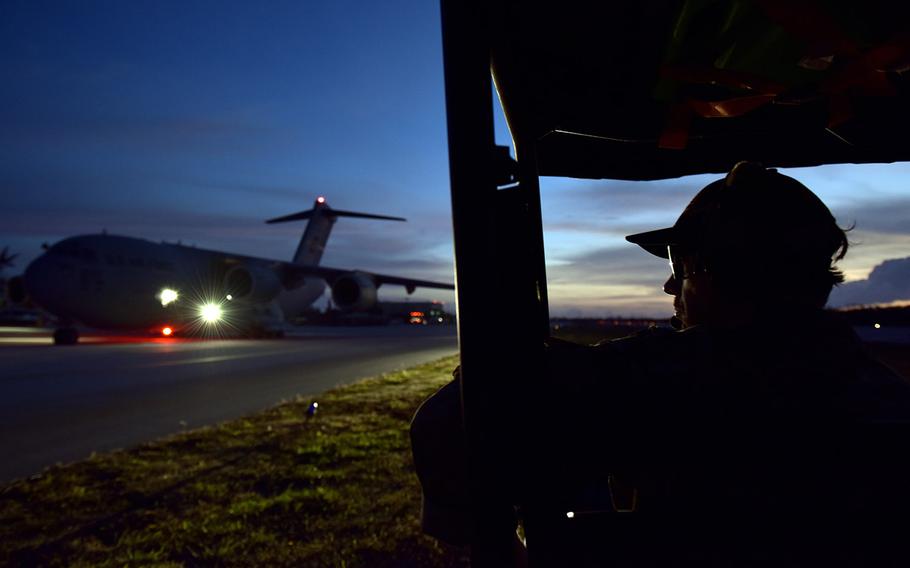 A special operator assigned to the 125th Special Tactics Squadron, Oregon Air National Guard, helps to direct a C-17 Globemaster as it taxis at Marathon International Airport in the Florida Keys, Sept. 11, 2017. The 125 STS deployed to the island following Hurricane Irma to clear the airstrip of debris, open the airport and manage all air traffic in the area in order to allow for military transports to deliver fuel, food and water to the region. (Beth Holliker/Air National Guard) 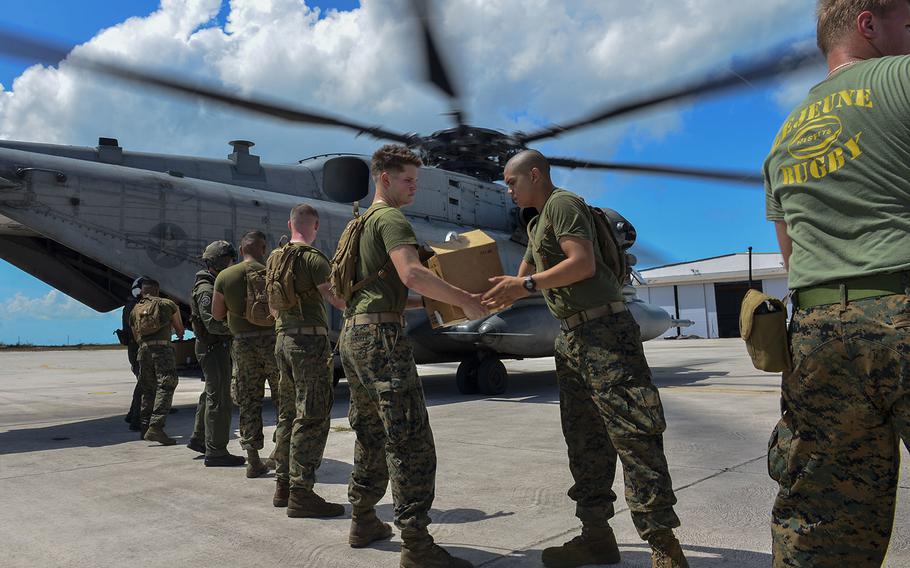 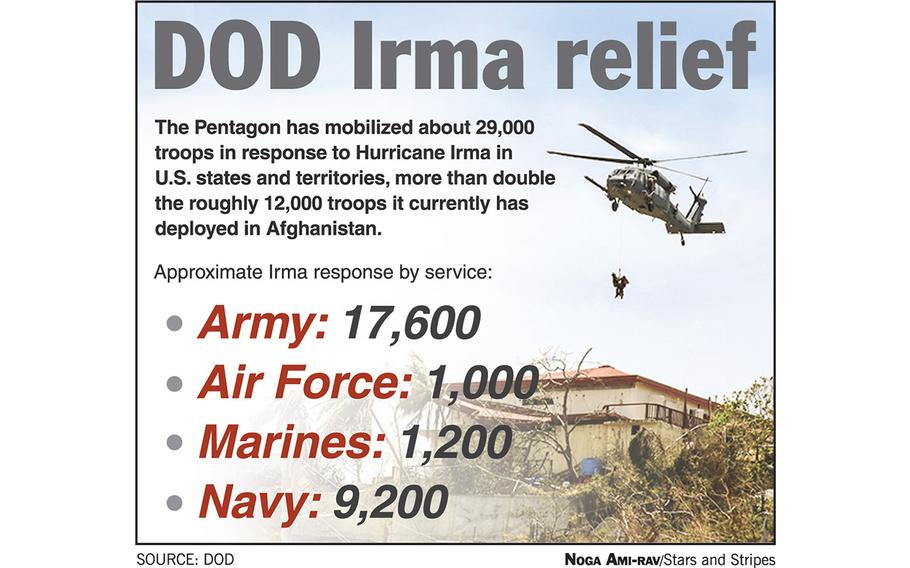 WASHINGTON – The Pentagon has mobilized nearly 30,000 military personnel for recovery operations along Hurricane Irma’s devastating path from the U.S. Virgin Islands up to the eastern mainland, where it carried tropical storm-strength winds north of Atlanta, defense officials said Wednesday.

By Wednesday, the bulk of the military response, some 19,000 troops, were focused on Florida, where they were conducting road clearance, supply delivery and search and rescue operations throughout the entire state, according to Pentagon and Florida National Guard spokesmen. Additional troops could be called into the state in the coming days, they said.

Irma impacted virtually all of Florida, hitting the Keys early Sunday as a Category 4 storm and making landfall just south of Naples before moving north into Georgia. Officials have blamed Irma, the most powerful storm ever recorded in the Atlantic Ocean at one point, for more than 60 deaths along the storm’s path including more than a dozen in Florida.

Some 8,000 members of Florida’s Army and Air National Guard were leading the military response, which officials said could last several weeks as they have in the wake of Hurricane Harvey. Thousands of National Guard troops remain on the ground assisting with relief operations nearly three weeks after that Category 4 storm struck Texas’ coast Aug. 25.

“The next days and weeks will no doubt be trying and exhausting as we begin to rebuild,” said Army Maj. Gen. Michael Calhoun, the top Guard officer in Florida. “But no matter what this storm has brought, know that you are not alone.”

In addition to search and rescue and route clearance missions, Guard members in Florida were assisting at more than 250 temporary shelters set up throughout the state. In Georgia, 1,100 National Guard members were on duty conducting similar operations, said Desiree Bamba, a Guard spokeswoman.

Five Navy warships full of sailors and Marines were positioned Wednesday off the coast of Florida, primarily to provide aid to the Keys. The ships, carrying dozens of helicopters and tilt-rotor aircraft, were prepared to provide aid wherever they were needed within Florida, according to the Navy. On Tuesday, Marines and sailors operating off those ships delivered more than 52,000 pounds of supplies and equipment to Key West. They were continuing those operations Wednesday, according to a statement from the 26th Marine Expeditionary Unit.

Nearly a week after Irma passed through the U.S. Virgin Islands and Puerto Rico on Sept. 7 as a devastating Category 5 storm, nearly 10,000 U.S. troops were continuing to provide relief operations there, primarily from several Navy ships positioned around the U.S. territory in the Caribbean Sea.

Marine and Navy helicopters from the USS Kearsarge, an amphibious assault ship, and the USS Oak Hill, a dock landing ship, were evacuating people from St. Thomas to St. Croix and delivering supplies to other islands in the American territory, according to a statement from U.S. Northern Command. Marines and National Guard members were conducting road clearance and distributing supplies.

The USS Wasp, an amphibious assault ship, and the USS McLean, a cargo ship, were also conducting relief efforts on the islands, according to the Northern Command statement.

Military personnel have rescued or evacuated more than 1,600 people from hard-hit islands in the American chain, according to the Pentagon.

The Pentagon has described its response to Irma as “massive.” The response could grow as large as the military response to Hurricane Katrina in August 2005, when some 50,000 troops helped in relief operations in the wake of the storm that devastated areas of Louisiana and Mississippi.