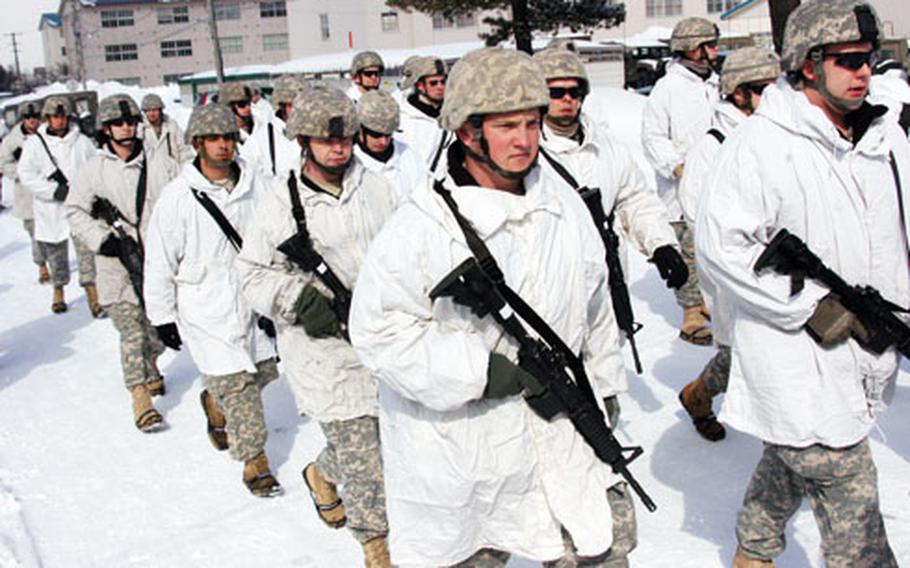 About 300 Kentucky National Guardsmen are participating in North Wind 2009, which began earlier this week in Sapporo, Japan. (Photo by Vince Little/S&S)

About 300 Kentucky National Guardsmen are participating in North Wind 2009, which began earlier this week in Sapporo, Japan. (Photo by Vince Little/S&S) Pfc. Chris Sons plants himself in the snow during sniper training. (Photo by Vince Little/S&S) SAPPORO, Japan &#8212; When it comes to defending Japan, the U.S. Army doesn&#8217;t have massive infantry and tactical units sitting idly around the country, waiting to act if hostilities broke out.

But U.S. Army Japan leaders can certainly bring them over right away for the fight.

That process played out on a smaller scale this week at North Wind, a field exercise under way in waist-deep snow on training ranges near Camp Makomanai in Hokkaido. About 400 U.S. soldiers and 700 troops from Japan&#8217;s northern army are taking part &#8212; including those in support roles.

"For us, it&#8217;s not the tactical piece as much as site-scene management," said Lt. Col. Paul Horlacher, USARJ&#8217;s chief of exercises. "We can actually glean the command-and-control element and logistical tasks we&#8217;d have in theater if we had to go to war. We have to bring forces in and sustain them as part of our RSOI (receive, stage, onward integration) mission."

The unit toting the arsenal for USARJ during North Wind is the Kentucky Army National Guard&#8217;s 1st Battalion, 149th Infantry Regiment &#8212; a combat-seasoned unit that served a year in Iraq in 2006-07. About 300 soldiers came to Japan for the exercise.

"It&#8217;s a great opportunity for our soldiers. You can see their enthusiasm," said Col. Scott Campbell, commander of the Kentucky Army National Guard&#8217;s 149th Maneuver Enhancement Brigade. "We could only bring 300. The battalion left 500 at home."

Alongside the Japan Ground Self-Defense Force, the guardsmen &#8212; wrapped up in white, cold-weather ponchos &#8212; are living in tents and trudging through heavy snow as they practice passing through enemy lines, establishing perimeters and attacking objectives. They&#8217;re also engaged in mock sniper operations and ski training.

"They are a relevant, current, forward-thinking military," he said of the JGSDF. "Sometimes, we think we have coined the right way of doing things, but we have to adjust that view."

Previous North Wind drills were built exclusively around, for instance, defensive measures reacting to "attacks" on Hokkaido, according to Horlacher.

"Over time, it&#8217;s evolved into missions more offensive in nature, but that&#8217;s only part of the grander scheme in our defense of Japan," he said.

For the 1-149 infantry battalion, this week&#8217;s exercise offered a chance to refine combat skills alongside a key U.S. ally. Many of the American troops in North Wind also have completed tours to Afghanistan, Bosnia and the Horn of Africa.

"Our young soldiers are excited about walking around with combat patches on their arms," said Lt. Col. Michael Abell, 1-149&#8217;s commander. "We took on this deployment because we want to be a great unit &#8212; not just do a small stint once a year back home."

The National Guard is breaking recruiting records right now, and Kentucky is among the leading states, according to Campbell.

"These 300 soldiers get to go to Japan, train with the JGSDF and fire their weapons in 4-foot-deep snow," he said. "You don&#8217;t retain soldiers by giving them nothing to do."