Near the Pakistan border, an ambush kills a beloved soldier 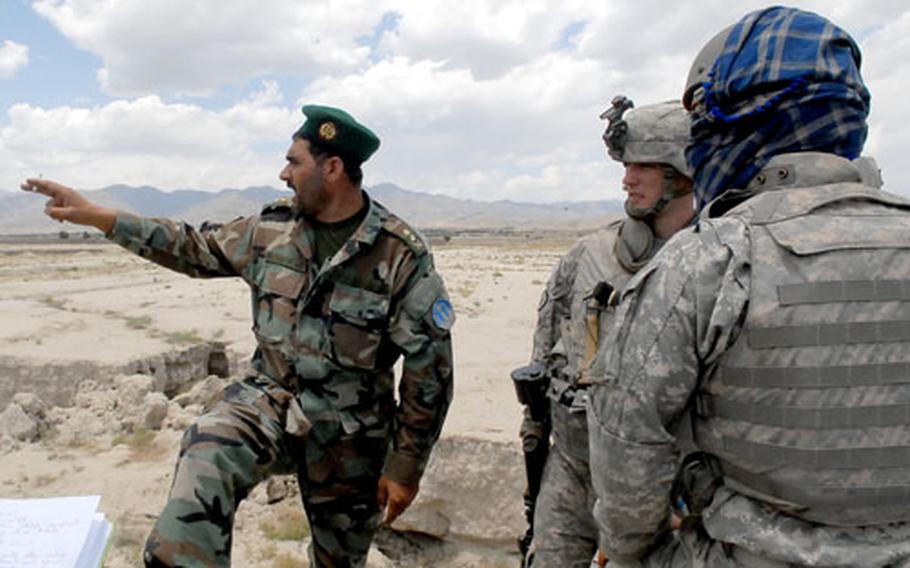 Afghan National Army Lt. Col. Fazul Rahaman describes to Capt. Bobby Davis, 33, of Columbus, Ga., events in the wake of an ambush on a U.S. and Afghan army convoy in the village of Samawat on Saturday. Davis&#39; 2nd Platoon, Dog Company of the 4th Brigade, 25th Infantry Regiment out of Alaska, arrived on the scene during the firefight to help the ambushed forces. (Dianna Cahn / S&S)

Afghan National Army Lt. Col. Fazul Rahaman describes to Capt. Bobby Davis, 33, of Columbus, Ga., events in the wake of an ambush on a U.S. and Afghan army convoy in the village of Samawat on Saturday. Davis&#39; 2nd Platoon, Dog Company of the 4th Brigade, 25th Infantry Regiment out of Alaska, arrived on the scene during the firefight to help the ambushed forces. (Dianna Cahn / S&S) 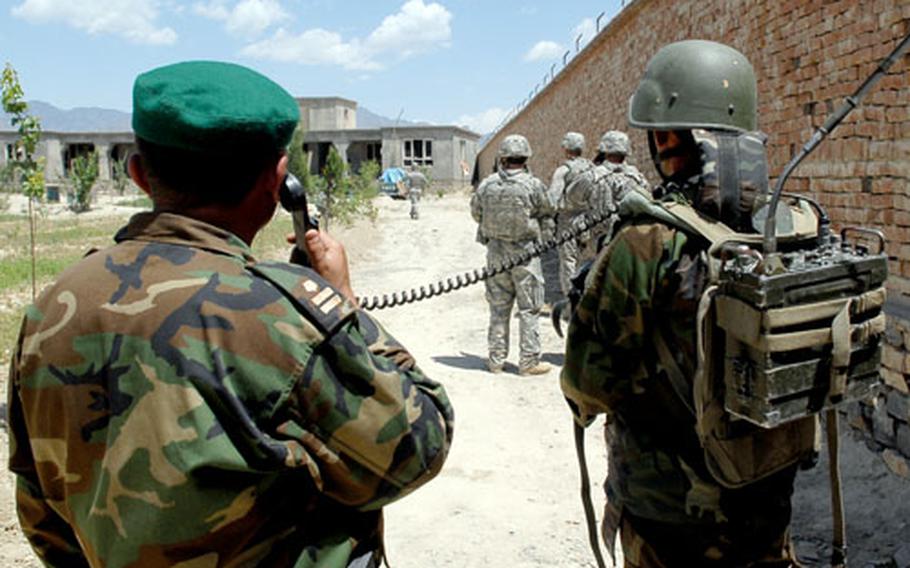 Afghan Army Lt. Col. Fazul Rahaman makes contact with his troops by radio as U.S. and Afghan forces search the walled compound of a home, called a kalat, following an ambush on a U.S. convoy in the village of Samawat on Saturday. (Dianna Cahn / S&S) 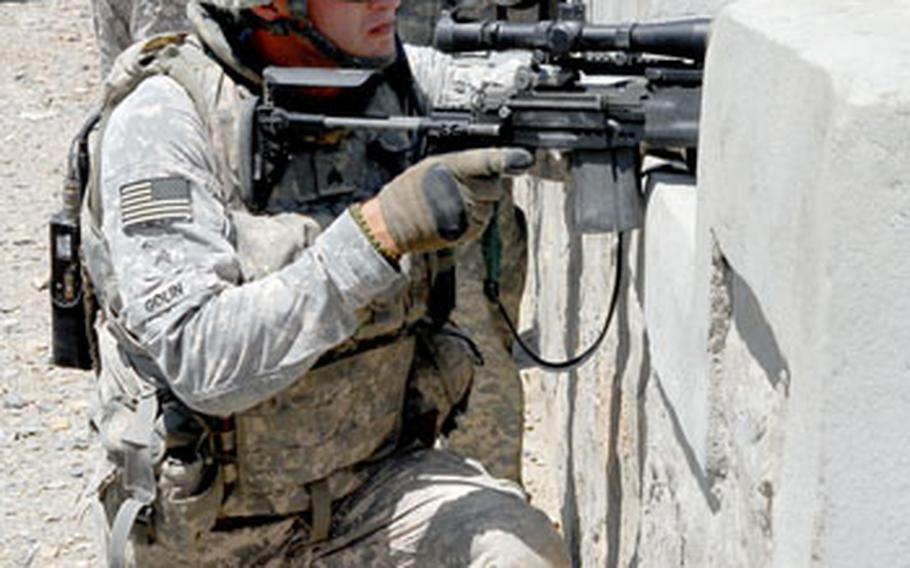 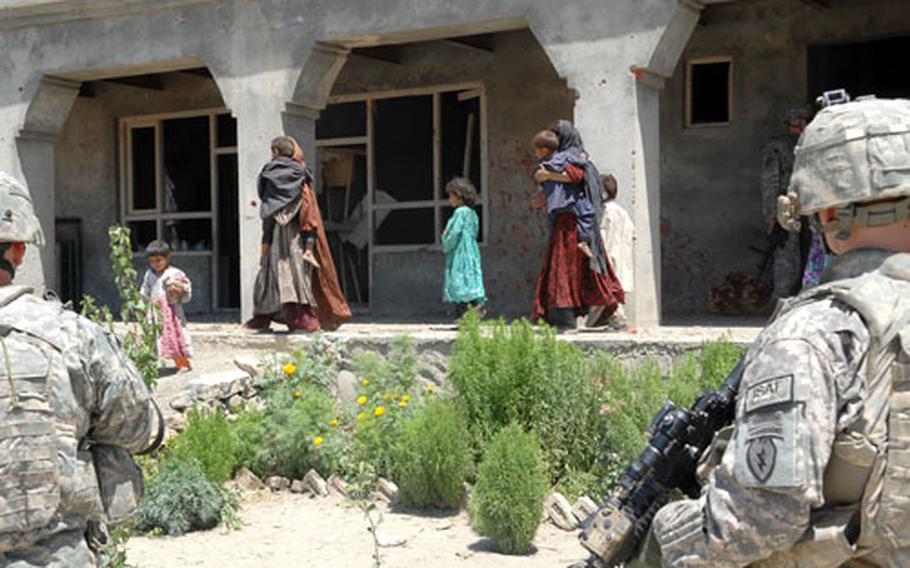 Afghans leave their home as U.S. and Afghan forces search their walled compound, or kalat, following an ambush on a U.S. convoy in Samawat on Saturday. U.S. helicopter gunships fired into the compound after the ambushed trucks reported they were taking gunfire from attackers who&#39;d entered the kalat. (Dianna Cahn / S&S) 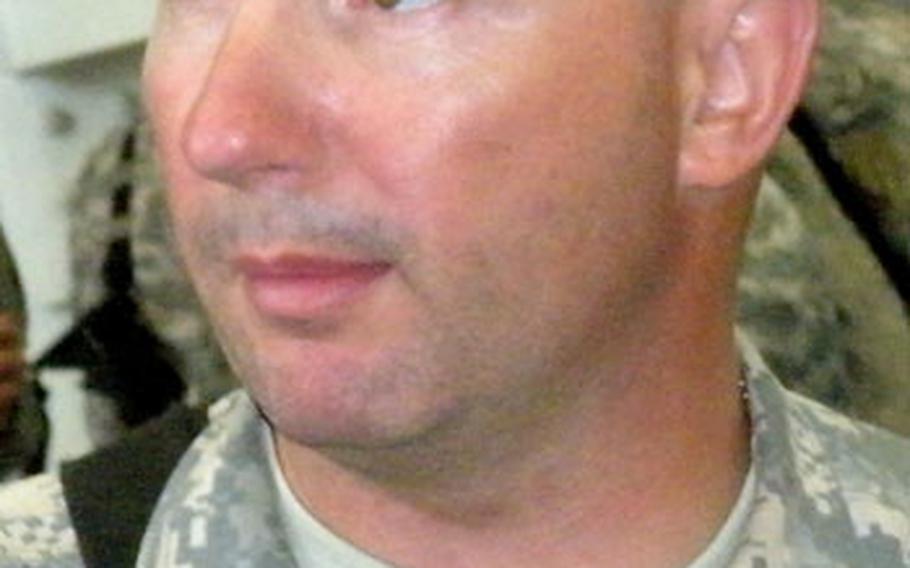 First Sgt. John Blair, 42, of the Georgia National Guard, was killed during an ambush Saturday on his convoy in Samawat, a village about six miles from Camp Clark in eastern Afghanistan. (Photo courtesy of Staff Sgt. Timothy Bellinger)

SAMAWAT, Afghanistan &#8212; The gunner&#8217;s weapon was blazing over Staff Sgt. Timothy Bellinger&#8217;s head. He jumped from window to window of his armored vehicle, trying to make out the battle that 1st Sgt. John Blair was fighting in the gunner&#8217;s position above him.

Bellinger felt the strike of a rocket-propelled grenade as it tore through the turret. He heard Blair&#8217;s gun cease firing. He saw the body of a man who always pushed his guys to do it right, slump lifelessly in the belt.

He pulled the faceless body of a man he&#8217;d come to love out of the gunner&#8217;s belt and climbed into the turret to replace him.

Company A of the Georgia National Guard&#8217;s 48th Brigade Combat Team, 1st Battalion, 121st Infantry Division arrived at Camp Clark just over a week ago. They were the new kids at a small, tight-knit forward operating base in eastern Afghanistan&#8217;s Khost province that was struggling to expand as fast as these guys were arriving. Blair&#8217;s death, confirmed Monday by the Pentagon when Dover Air Force Base in Delaware announced that Blair&#8217;s family had approved media coverage of the return of his remains, is the unit&#8217;s first.

They were trained infantry, although their mission here as members of Embedded Training Teams is to mentor the 1st Brigade of the Afghan National Army&#8217;s 203rd Corps.

Blair was their leader. He was tough, unrelenting. He cursed and reprimanded and gained not just their respect, but their fondness during the months of training for their deployment in Afghanistan. He could be harsh, but was fair and imparted to his men a sense of their potential.

Many go back a long time with Blair, who was in his 40s. Sgt. Ryan Popejoy, 25, of Roswell, Ga., served with Blair for six years, including a deployment in Iraq. As gunner in the next vehicle back, Popejoy watched the whole thing unfold.

The convoy, led by Afghan army trucks and Humvees, was ambushed Saturday about six miles out of camp. The Afghan trucks had pulled ahead, across a small bridge, when at least three men opened fire on them from a culvert alongside the bridge, taking cover behind the bridge wall. Several soldiers recalled more fire coming from the opposite direction, though it appeared that only the men by the bridge were throwing grenades.

One of them had an RPG. First he fired one at the Afghan trucks. Then, the lead U.S. vehicle drove into view.

Blair got off nearly 80 rounds before the man behind the wall fired a second RPG in his direction, said Lt. Col. Pete Molin, commander of the training teams at Camp Clark, who was in the front seat.

The battle went on for 45 minutes. Afghan forces took the lead, backed by their U.S. comrades and helicopter gunships that fired into neighboring house compounds where the U.S. forces said insurgents had fled to and were firing from. They killed two of three men under the bridge while the rest fled.

By then, the scene was filled with quick reaction forces from Clark that came out to help. They remained to search the area while the crew in the original convoy went back to base to take care of Blair&#8217;s body, and start reckoning with their loss.

&#8220;From the second I heard his voice sing out in the dark on the helipad, I liked him,&#8221; said Molin, who was there to greet the new men when they arrived. &#8220;I could tell he was large and in charge and had a way of bossing people around and making people like it. I could tell the new soldiers were well-led.

To more than one under his command, Blair&#8217;s gruff words were filled with life&#8217;s lessons. They looked to him for guidance. He welcomed in men from Company B who joined their team in preparation for Afghanistan, making them part of a group that had been together for years.

He had what Campbell described as a sadistic sense of humor and he didn&#8217;t discriminate between the old guys and the new. He rode everyone hard and they loved him for it.

One time, Blair and 1st Lt. Carl Anderson, who was Blair&#8217;s platoon sergeant 15 years ago, were ambushed in Iraq, Anderson recalled.

Doc stopped shooting and got back in the truck.

They all had plans to go camping together when they got back to Georgia, and Blair, a stepfather of two and a devoted grandfather, planned to dig out a lake for catfish on his Calhoun, Ga., property so he could take his grandson fishing.

Blair only bought American and switched from Budweiser to Coors Light after Budweiser was sold to a Belgian company. He once told Love that if he bought Pakistani he was essentially funding the bombs that would target them.