Near Syrian border, US troops guard against missiles — and monotony 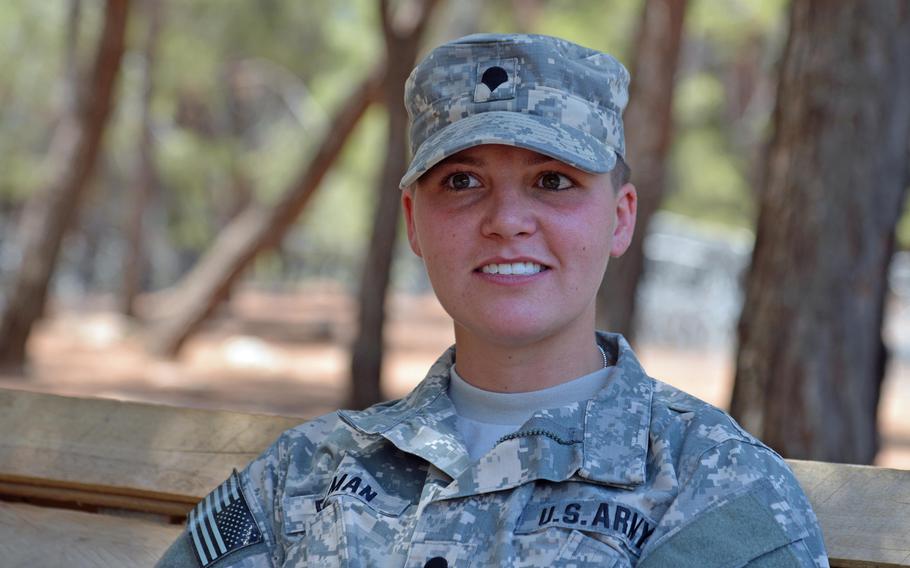 Pfc. Taija Stewart watches Spc. Katherine Dillon pour a colander of noodles into a pan as they prepare dinner for their fellow 5th Battalion, 7th Air Defense Artillery Regiment soldiers at a Turkish army base in Gaziantep, Turkey. (Michael Abrams/Stars and Stripes) Patriot missile launchers from the 5th Battalion, 7th Air Defense Artillery Regiment stand on a hillside at a Turkish army base overlooking the city of Gaziantep. (Michael Abrams/Stars and Stripes) 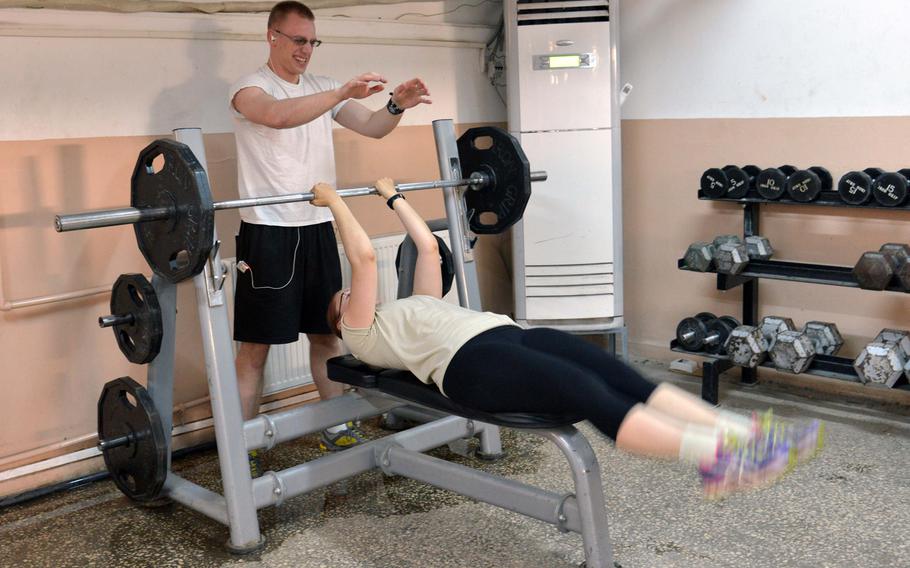 A 5th Battalion, 7th Air Defense Artillery Regiment soldier shops in the Army and Air Force Exchange Service trailer on the Turkish army base where the unit is deployed in Gaziantep. (Michael Abrams/Stars and Stripes) 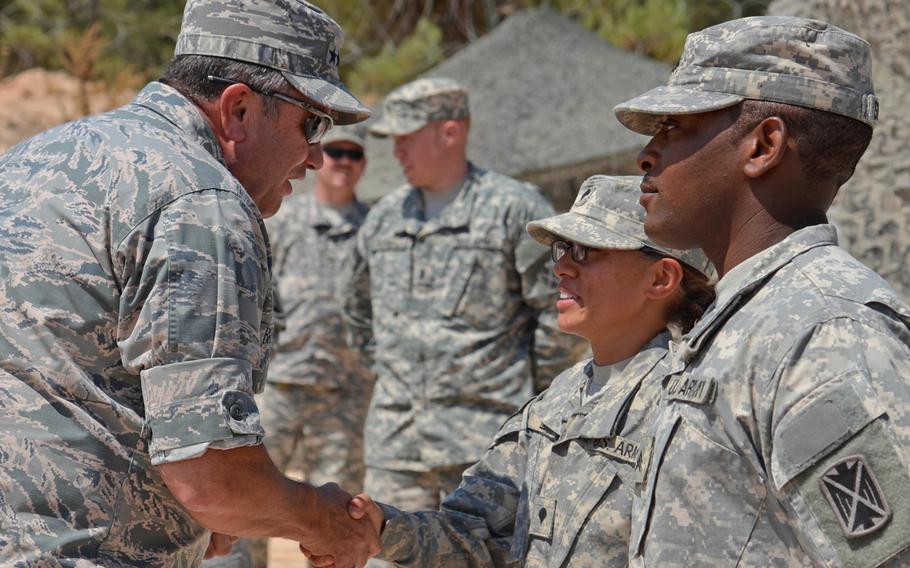 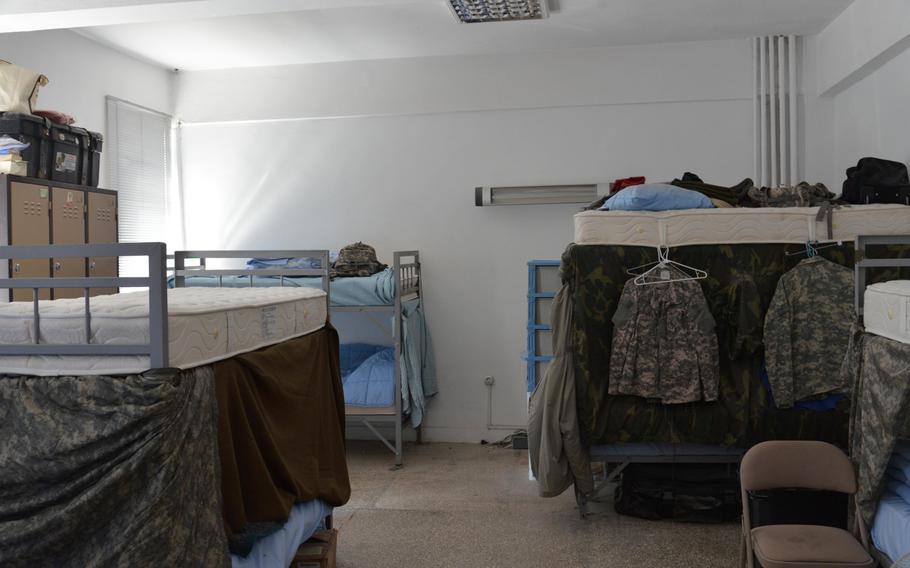 A typical barracks room used by soldiers of the 5th Battalion, 7th Air Defense Artillery Regiment at a Turkish army base in Gaziantep, Turkey. (Michael Abrams/Stars and Stripes)

GAZIANTEP, Turkey — Spc. Kayla Eckman has protective eyes over this city of 1.5 million people, guarding against any incoming missiles from Syria, which lies just over the horizon.

“There’s a threat and that’s why we’re here, to protect the people of Gaziantep,” said Eckman, who serves as a Patriot operator with the 5th Battalion, 7th Air Defense Artillery Regiment out of Kaiserslautern, Germany.

At the U.S. Patriot missile site in southern Turkey, Eckman’s job is to monitor a high-tech tracking screen for any sign that the war in Syria might creep into Turkey. If a missile threatens Turkish airspace, it’s the 23-year-old Eckman’s job to spot it.

“To see a live fire would be fantastic, and part of you wishes it would happen. That’s what we train for,” said Eckman of the regiment’s Battery A. “But we’re here for the safety of the people of Gaziantep, and it’s a good thing that hasn’t happened.”

For a year and a half, U.S. soldiers have been guarding the airspace from a Turkish army base in this city about 40 miles from the Syrian border in response to a security request from Turkey. In late 2012, NATO defense ministers authorized the deployment of Patriots following cross-border shelling from Syria that killed several Turkish citizens. Patriot batteries from Germany and the Netherlands have been deployed to other parts of southern Turkey in support of the mission.

But no missiles have been fired from Syria, and consequently there have been no intercepts.

At the U.S. missile site, the 5-7 is the second U.S. unit to deploy to Gaziantep, having replaced the Fort Sill, Oklahoma-based 3rd Battalion, 2nd Air Defense Artillery in December. Whether a third unit will be sent to replace the troops from Kaiserslautern when the 5-7’s tour ends in November remains an open question.

“We will be looking to our Turkish allies to identify whether they think this mission needs to stay,” Breedlove said during a Thursday site visit in Gaziantep where he met with U.S. troops. “If (Turkey) does, we will look to all the nations of NATO to prepare another follow to this mission.”

“Collective defense that is the heart of what we do,” Breedlove said.

His visit was focused solely on the Patriot mission, but the U.S. and European allies in particular have expressed concern about Turkey’s long, porous border with Syria. The country, which hosts some 800,000 thousand Syrian refugees, has become a principal conduit for would-be jihadists who want to fight Syria’s secular regime. Critics of the Turkish government, which backs the Syrian opposition, have accused it of turning a blind eye to foreign fighters transiting though to take up arms against Syrian forces.

Breedlove said the prospect of fighters returning to Europe is causing alarm within NATO and that the first step in countering the threat is improving intelligence sharing between law enforcement agencies in respective countries.

“I’m very concerned and so are the nations of NATO,” Breedlove said. “We need to collectively get after it and we are.”

U.S. troops in Gaziantep say they are trying to stay sharp in the face of the day-to-day drudgery, though they acknowledge they have it better than many others who deploy.

“It can be monotonous,” said Staff Sgt. Justin Rogers, 26, who serves with Battey B. “Every day it is pretty much the exact same thing.”

In most cases, separation from family is the hardest part for the troops. Rogers’ wife, Sgt. Sarah Rogers, is assigned to the same battalion, as a Patriot launcher. But long work days and different work schedules mean few chances to meet.

“We almost never see each other,” he said. “Still, all and all, it hasn’t been a bad deployment.”

The day starts early for most troops here: up at 4:30 a.m. forphysical training. Then off to breakfast and the office, where the day sometimes lasts until midnight when the work load is heavy, Rogers said.

Unlike big bases in other forward deployed locations, there are no food contractor services or other amenities such as coffee shops and American-style fast food restaurants. The two hot meals a day are prepared by soldiers, who do their best to improvise in their mobile kitchen.

“Because it’s an expeditionary type of mission we don’t have a lot of the creature comforts that come with other deployments with contractor services,” said Command Sgt. Maj. Steve Burnley. “So it’s about getting into a battle rhythm and staying on top of your game.”

For those who serve at the Patriot launcher site, up on a hill overlooking Gaziantep, the shifts are long and grueling under the scorching sun.

“The heat is the hardest part,” said Spc. Alexis Juarez, a 21-year-old whose job is maintaining the Patriots.

Most troops concur, however, that they’ve got it pretty good as far as deployments go.

The soldiers sleep on beds rather than cots in air-conditioned, hard-cover buildings so there is a reprieve from the brutal summer heat. The facilities have steadily improved since the mission in Turkey first launched a year and a half ago. The buildings that now serve as a headquarters and barracks were a ramshackle wreck. Steady work has transformed them into something close to comfortable.

“This is my first deployment and I have no complaints,” Eckman said. “I was expecting a lot worse.”

On his stop at the site, Breedlove met with troops, shaking hands and offering praise as he handed out coveted commander coins to soldiers.

“When one of our allies is threatened, we are all threatened, and we work together and stay resolved to meet that challenge,” Breedlove said after meeting with soldiers.

The presence of anti-missile Patriots has helped deter aggression out of Syria, Breedlove said. “If you measure success by the fact that we’ve had no missile attacks on Turkey, we’ve been completely successful in this mission.”