Near Army construction site in Germany, a trove of ancient Roman artifacts 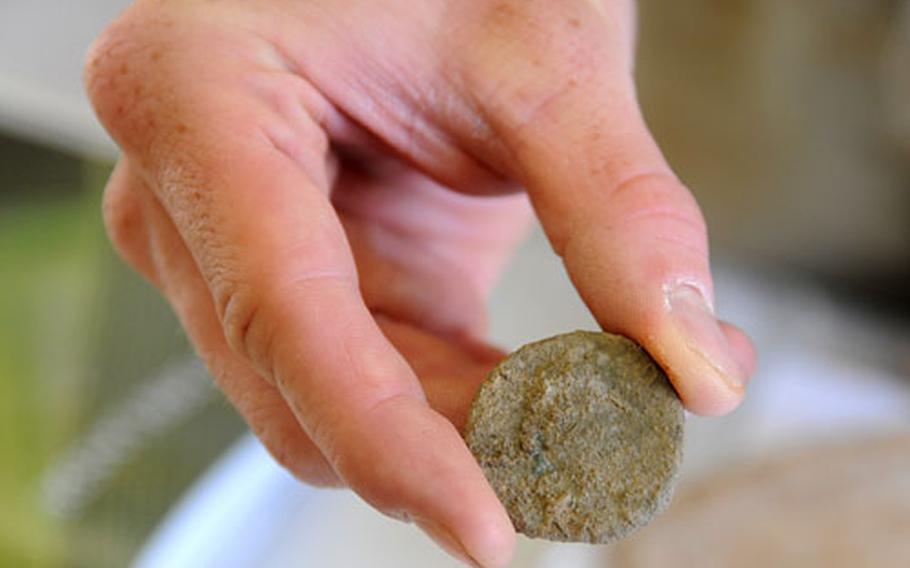 This Roman coin, made of either copper or bronze, was found at an excavation site where a road is being built for the new housing area at Wiesbaden Army Airfield. (Michael Abrams / S&S)

This Roman coin, made of either copper or bronze, was found at an excavation site where a road is being built for the new housing area at Wiesbaden Army Airfield. (Michael Abrams / S&S) 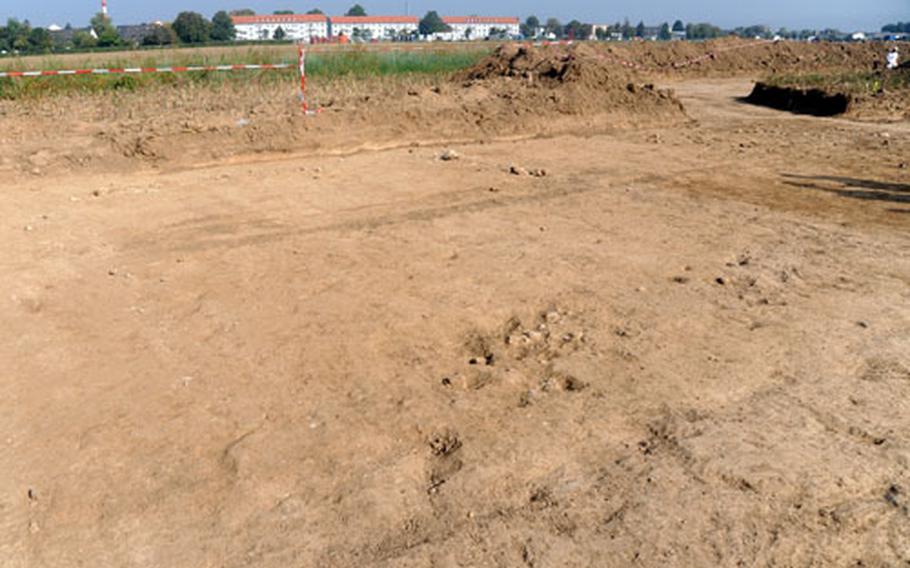 Barely visible lines of stone mark what archaeologists believe is the remnants of a Roman house. It was uncovered during construction of a road for the new housing area at Wiesbaden Army Airfield, seen in the distance. (Michael Abrams / S&S) 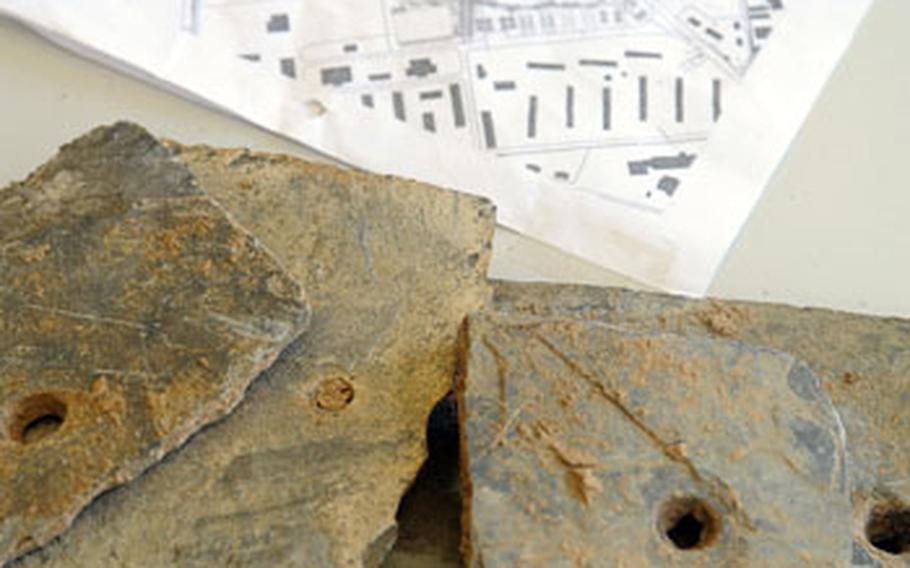 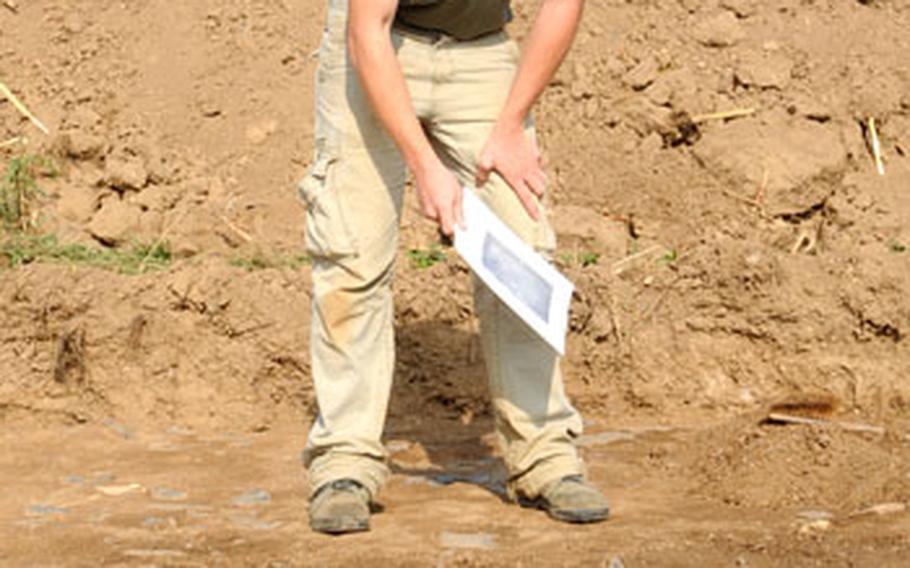 Guido Schnell talks about a debris-filled trench that is being excavated on the site where the road is being built. The trench holds slate roofing tiles, animal bones and bricks from what was possibly a Roman settlement. Schnell is an excavator on a team from the Hessen state historical preservation office. (Michael Abrams / S&S) 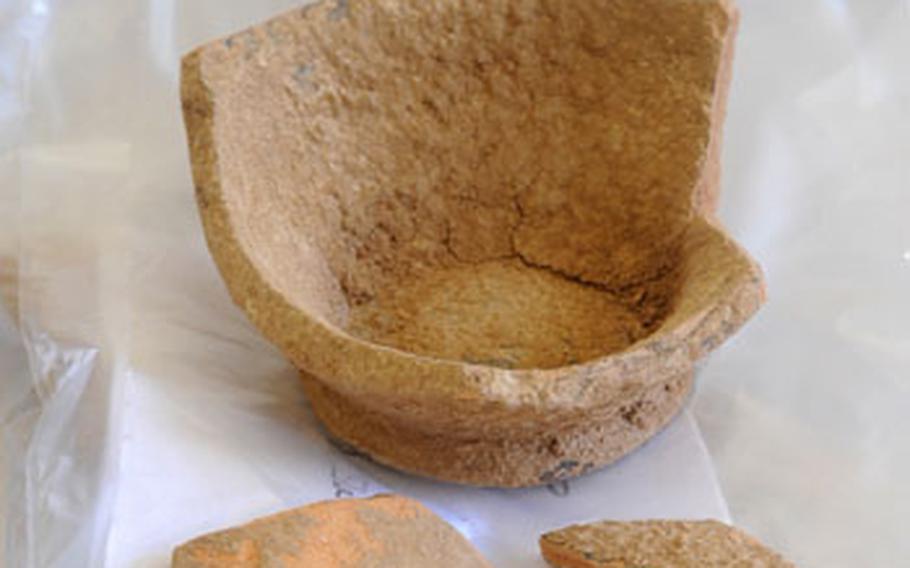 These pottery shards were uncovered at the excavation site. (Michael Abrams / S&S)

WIESBADEN, Germany &#8212; A team of archaeology students and experts believe they have unearthed remnants of a Roman settlement from the second or third century near the construction site of an Army housing project, but the discovery isn&#8217;t expected to affect the project.

The team, from nearby Mainz University, discovered a Roman coin, pieces of pottery, roof tiles, decorated bricks and 23 pieces of raw lead. The students also believe they have found the wall outlines of a building.

"We think it&#8217;s from the first to third century after Christ," said Dr. Guntram Schwitalla, a district archaeologist in Hessen. "If it&#8217;s from the second century A.D., it would be a civilian building and we didn&#8217;t expect this. We expected only military buildings."

The items were found at the excavation site where a road is being built for a new $133 million Army Corps of Engineers housing project. The project is part of a planned expansion at Wiesbaden Army Airfield, which is expecting an influx of troops in the coming years.

Unless the team discovers something unexpected, construction on the housing complex should begin on schedule, said student Guido Schnell, an excavator at the site.

Road and utilities construction will start in November with work on the housing beginning next spring, according to Roger Gerber, chief of the transformation stationing management office at Wiesbaden Army Airfield.

Schnell said the team focused on the site because of the nearby water supply of the Rhine River; the soil, which is favorable for agriculture, and aerial photographs of a nearby Roman army training camp.

"Also, we are not far away from Mainz, which was known as Moguntiacum, a big Roman city," said Schnell. "Up to four legions of the Roman army were stationed here, which is significant because there were 25 to 30 legions in the entire army."

Christiane Dostewitz, a supervising archaeologist on the project, said the site seems to be a civilian settlement, but noted they will have a better idea as the excavation proceeds.